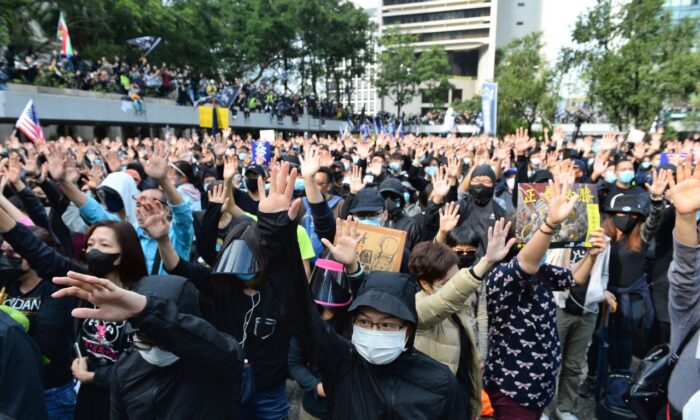 Protesters hold up their hands in a sign to voice their five demands at a rally in Chater Garden, Hong Kong, on Jan. 19, 2020. (Sun Pi-lung/The Epoch Times)
By Frank Fang

Organizers told local media that roughly 150,000 people showed up at the peak of the rally. The police gave a far lower estimate of 11,680 people.

The group had planned to hold a march after the rally, going from Chater Road to Causeway Bay, but police rejected their application, citing safety concerns.

But the police-approved rally was abruptly called off early by police, who soon fired tear gas to disperse the large crowd gathered near Chater Garden.

The city’s Hospital Authority announced that seven people from Sunday’s protest events were sent to hospitals to treat injuries, ranging from 17 to 60 years old.

Before the rally began at 3 p.m. local time, the Hong Kong bureau of The Epoch Times reported that police stopped and searched three young people dressed in black at Edinburgh Place, a few blocks away from Chater Garden. The three were eventually let go.

Hong Kong police also announced that it arrested four men in the nearby Central district, for possessing “offensive weapons” such as hammers, sticks, spray paints, and gloves, “for possible unlawful purposes.”

Civil Assembly Team organizer Ventus Lau denounced the police for questioning and searching people and journalists in areas near the rally. He said the police’s actions amounted to suppressing press freedom and the freedom of assembly.

Lau also called on attendees to have a new mentality in 2020, of not only attending protest events but also keep “resisting.”

At the rally, people shouted out slogans echoing their demands: “The Heaven Will Destroy the Chinese Communist Party (CCP),” “I Want True Universal Suffrage,” and “Banish the CCP, Liberate Hong Kong.”

Protesters also flew British and U.S. flags. One attendee held up a poster that read: “We are facing a bloody unelected government that absolutely refuses to listen to HK people, and only serves its master in Beijing, and we are saying ENOUGH OF THAT.”

Demonstrations against Beijing’s encroachment into the former British colony, which was returned to Chinese sovereignty in 1997, first ignited in June over an extradition bill that would the Chinese regime to transfer individuals for trial in mainland China. Their demands have since broadened to include calls for free elections and an independent investigation into police use of force against protesters.

A protester who identified himself as K, told The Epoch Times’ sister media NTD that he was concerned that Hong Kong police have become more aggressive and beaten protesters—not just the more aggressive protesters who are at the frontlines, but also those who are nonviolent.

A female student, T, urged other countries to pay more attention to what’s happening in Hong Kong and listen to the protesters’ demands.

Similar rallies were held in 22 cities in 12 countries, including the United States, Canada, and Australia on Jan. 19. The global-coordinated effort was aimed at calling on governments around the world to pass laws similar to the United States’ Hong Kong Human Rights and Democracy Act, which allows for sanctions, such as freezing assets and denying entry, on Hong Kong and Chinese government officials who have violated human rights.

Due to the venue’s limited capacity, the organizer had announced that in the event of a large turnout, participants should stay for part of the time, then leave via a designated route to make room for others to take their place.

Around 4:30 p.m. local time, Hong Kong police asked the organizer to call off the rally early, due to “violence” by protesters. The police statement described the activities as throwing water bottles, building road barricades, and throwing paint bombs at buildings.

When plainclothes police arrived to negotiate with Lau, one officer initially refused to show his police identification card, drawing an angry crowd, according to Lau. Eventually, the officer relented.

Hong Kong police later issued a statement on its Facebook page, saying that at least two of their staff were beaten by protesters during the melee. The police added that they would “strictly enforce the law to arrest the attackers.”

At 4:30 p.m., Lau announced that the rally was called off. Ms. Chan, 70, told NTD that she was unhappy that the assembly ended prematurely due to the police’s actions.

At multiple locations in Central, police fired rounds of tear gas in an attempt to clear protesters.

At Pedder Street, several blocks from Chater Garden, police arrested at least 12 people, among them 9 males.

Lau gave a press conference at around 7 p.m. He was immediately arrested on one count of “inciting the crowds” and for violating regulations stipulated in the police application for the assembly, according to Hong Kong media.