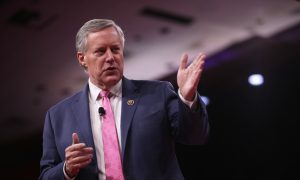 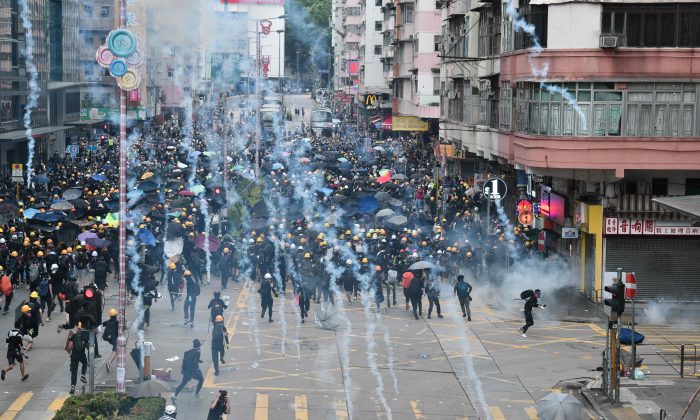 Pro-democracy protesters throw back tear gas fired by the police during a demonstration against the controversial extradition bill in Sham Shui Po district in Hong Kong on Aug. 11, 2019. (Anthony Wallace/AFP/Getty Images)
Social Issues

Hong Kong was rocked by mass demonstrations and clashes between protesters and police on Aug. 11, as protesters shifted tactics to flash mob-style encounters with police in the 10th straight weekend of unrest.

Demonstrators recently adopted a strategy of retreating when pressed by police, only to reemerge en masse at another location.

Police, in response, fired tear gas and charged with batons at protesters in several locations, from shopping boulevards to bar-lined streets, and also fired tear gas inside a train station. They have  accused protesters of throwing gasoline bombs.

The protests, which began more than two months ago in opposition to a bill allowing extradition to the mainland, has thrown the city into its most serious crisis in decades as its residents bristle against Beijing’s growing encroachment.

Thousands of protesters participated in a peaceful rally at Victoria Park in the afternoon, while other demonstrators gathered in the streets of different communities to seek a full withdrawal of the bill.

Mickey, 16, said many of her classmates chose to sacrifice their study time for the “dream” of Hong Kong’s future despite not knowing if it would lead anywhere.

“We saw that many people who had the courage to stand up are losing their rights,” she told the Hong Kong bureau of The Epoch Times at the rally in Victoria Park.

“The government called us middle schoolers ‘rioters,’ but we are simply going to the streets to exercise our rights, and the police just disperse people with weapons.

“History will prove what we did to be right.”

At Hong Kong International Airport, protesters continued a peaceful sit-in at the arrivals hall for a third and final day.

In the evening, police fired tear gas in the tourist area Tsim Sha Tsui in Kowloon district, and the district of Wanchai, known for its bars and night-life. Police later said an officer at Tsim Sha Tsui suffered burns in the leg from a gasoline bomb.

According to hospital authorities, 13 people were injured and taken to hospital on Aug. 11, with two people in serious condition, local media reported.

One female protester at Tsim Sha Tsui, local media reported, was shot in the right eye with a bean bag round, which penetrated through her goggles.

“We believe that the practice was not only an improper and excessive use of force, but also threatened the personal safety of demonstrators and other citizens,” Civil Rights Observer said in a Facebook post. “According to the safety guidelines of the supplier, tear gas can only be used outdoors or in a well-ventilated area.”

Raab condemned “violent acts by all sides but emphasised the right to peaceful protest,” and “underlined that the violence should not cloud the lawful actions of the majority,” the UK foreign office said in a statement.

He suggested Lam engage in “meaningful political dialogue,” and launch “a fully independent investigation into recent events as a way to build trust.”

Raab’s call drew the ire of the Chinese regime.

“The United Kingdom has no sovereignty, jurisdiction, or right of supervision over Hong Kong.” Hua Chunying, spokeswoman for the Chinese foreign ministry, said at a regular briefing on Aug. 10.

Meanwhile, the city’s flag carrier Cathay Pacific Airways on Aug. 10 said it suspended one pilot for “rioting,” and dismissed two ground staff for leaking travel information for a Hong Kong police soccer team who were due to fly to China.