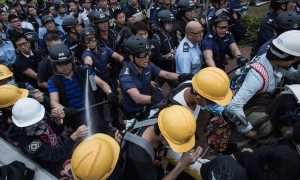 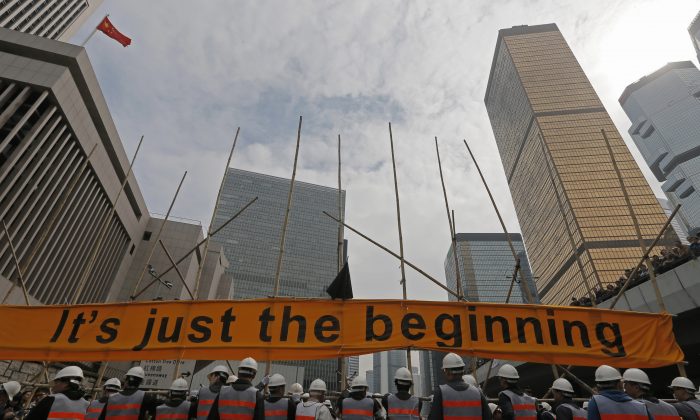 HONG KONG—Hong Kong authorities demolished a protest camp Thursday at the heart of the city’s two-and-a-half month pro-democracy movement but scores of activists taken away by police vowed their fight for genuine elections wasn’t over.

Hundreds of police officers armed with chain saws and bolt cutters methodically dismantled barricades, tore down canopies and removed banners in a daylong operation to shut the protest site sprawled across a normally busy highway next to the specially administered Chinese city’s financial district.

The operation was peaceful and unmarked by the violent clashes seen in previous confrontations between protesters and police. Traffic started flowing on the road by mid-evening.

The student-led protesters had occupied streets in three neighborhoods since Sept. 28 to protest Beijing’s restrictions on the first election of the city’s top leader, but momentum had faded in recent weeks as Hong Kong officials and China’s Communist leaders gave little ground, a reflection of the tough stance that Chinese leader Xi Jinping has taken on dissent.

Hundreds of demonstrators heeded police warnings to leave the protest zone to avoid being arrested, but dozens of students, pro-democracy lawmakers and others, including middle-aged and elderly supporters, remained sitting on the street. They chanted “I want true democracy” and “We will be back” but offered no resistance as they were taken away one by one, many lifted off the ground.

Calls for stiff resistance by radical factions went unanswered, possibly because police nabbed some leading dissidents before the Admiralty clearing.

Government broadcaster Radio Television Hong Kong reports that Raphael Wong, vice chairman of the League of Social Democrats; Alvin Cheng, the leader of Student Front, a hard-line group which rejects nonviolent protests; and Anthony So, a member of People Power, a far-left political party, were arrested at or near their homes on Wednesday.

Wong Yeung-tat, who leads the anti-Beijing organization Civic Passion, was arrested near his home at 1:00 p.m. local time on Thursday on 59 counts of unlawful assembly, Passion Times reports.

The sprawling encampment in Hong Kong’s Admiralty section, next to city government headquarters, was the focal point of what became known as the “Umbrella Movement” because of the protesters’ use of umbrellas to fend off police pepper spray.

Police had cleared out a second protest site in the blue-collar Mong Kok neighborhood late last month in an aggressive two-day operation that sparked several nights of clashes and saw about 160 people arrested. A smaller protest site in the Causeway Bay district remains untouched but police have vowed to move on it soon.

The protesters reject Beijing’s restrictions on the election of the city’s top leader scheduled for 2017, but failed to win any concessions from Hong Kong’s government.

Protesters promised to keep up their civil disobedience campaign against the government using new tactics. Many said the movement had sparked an awakening among the wider population.

“People will come back again, they will come back with stronger force,” said Alex Chow, secretary general of the Hong Kong Federation of Students, who was arrested.

Pro-democracy lawmakers said they would pressure the government in the legislature by blocking funding requests and the government’s electoral reforms.

“A dialogue can only happen when we vote down the coming political reform package,” said pro-democracy lawmaker Lee Cheuk-yan, who was the last to be arrested.

The city government’s second-highest official, Carrie Lam, said on Wednesday that she is open to talks with the students, but the chances of a breakthrough are slim given the wide differences between the two sides.

Protester Andy Chu, who was among those waiting to be arrested, said the movement “will move on to the next stage. It’s not about occupying the streets anymore. It can be about paying attention to other political issues such as social welfare and housing issues.”

The clearing operation began Thursday morning when workers enforcing a court order removed some barricades on the edge of the protest site. Police then sealed off the area and moved in to clear out the rest of it.

They tore down hundreds of tents and canopies that served as supply stations, leaving them in mangled heaps among discarded newspapers, flip-flops, cardboard boxes and umbrellas.

Police also razed a study area made up of tables and chairs and ripped down messages of support pasted to a nearby wall. At least 20 dump trucks with grappler arms picked up the debris.

From The Associated Press. With additional reporting by Larry Ong