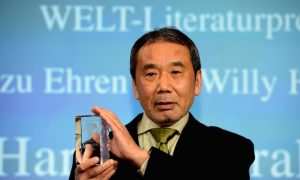 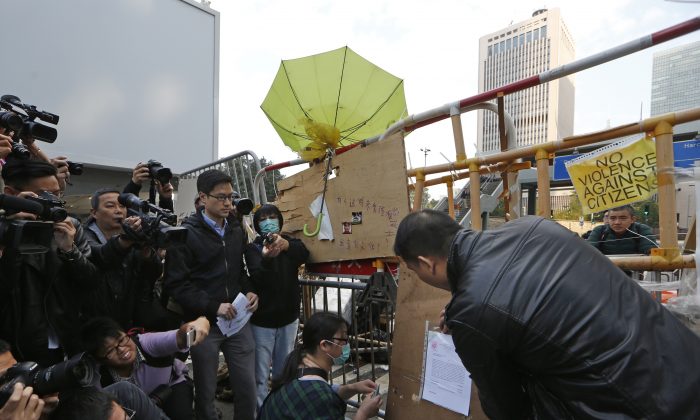 A bailiff member puts up an injunction document issued by a court, on a barricade set up by pro-democracy protesters at the occupied area outside government headquarters in Hong Kong Tuesday, Dec. 9, 2014. (AP Photo/Kin Cheung)
China

HONG KONG—Police warned Hong Kong pro-democracy activists that they have until Thursday to leave a sprawling protest camp which has blocked traffic in the Chinese financial hub for more than two months.

Authorities are set to move in after a court order authorized the removal of barricades, tents and other obstructions from the protesters’ main camp in the downtown Admiralty district, setting the stage for a possible last showdown with activists demanding greater democracy.

Police spokesman Cheung Tak-keung urged protesters on Tuesday evening to start packing up their belongings because they won’t have any time on Thursday. Workers are expected to carry out the clearance operation starting at 9 a.m. that day, said Paul Tse, a lawyer for the bus company that sought the injunction.

The court order, published in newspapers and posted by bailiffs Tuesday at the Admiralty site, authorizes court workers to request police assistance “where necessary.” It covers three sections of the Admiralty site, but Cheung said that after officers assist in clearing those areas they will also remove obstructions from other blocked roads nearby.

He said police would also dismantle barricades from a second, smaller site in the Causeway Bay district not covered by the court order “at an appropriate time,” without specifying when.

Referring to reports that some protesters plan to resist, Cheung said anyone who refuses to leave or obstructs officers will be arrested.

“We will take resolute action against anyone who attempts to block other roads or re-occupy roads that have been reopened,” he said.

Some 7,000 police officers will be deployed for the operation, local broadcaster RTHK reported.

The student-led protesters had been occupying three protest sites to press their demands for greater democracy, but authorities shut down one in the rough-and-tumble Mong Kok neighborhood late last month under a separate court order. The aggressive police operation sparked several nights of violent clashes in the neighborhood’s tight grid of streets, resulting in about 160 arrests.

The semiautonomous Chinese city’s Beijing-backed leader, Leung Chun-ying, said officers would use “minimum force” in assisting court workers to shut the site down. Earlier this week he said they were expected to encounter “fierce resistance.”

Organizers said as many as 200,000 people joined the protests early on, but numbers have since dwindled and only dozens now remain camped out at the Admiralty site, next to city government headquarters.

Crowd numbers swelled on Tuesday afternoon as many people came to take one last look. Students took photos in their graduation gowns. A large yellow banner that said “We’ll be back” was draped on the road.

Many were resigned to the site’s closure but remained hopeful for the future.

“We haven’t won anything but if, as everyone says, there’s been a civil awakening then I hope this is something we’ve accomplished to a certain extent,” said Carlos Cheung, a 28-year-old transport worker who has been visiting the protest site three or four times a week after work.

“Although they can take back Admiralty, Mong Kok and Causeway Bay, they can’t purge our desire for true democracy,” said 18-year-old Emily Yip, who was cramming for her college entrance exam at the site’s study area.

Student protest leaders have few options as the government maintains an apparent strategy of waiting them out.

The Hong Kong Federation of Students, one of the groups organizing the protests, said last week it is mulling a withdrawal but has not yet made a decision. The group earlier led a failed bid to surround the headquarters complex that resulted in a night of violent clashes in a desperate last-minute attempt to pressure the government over Beijing’s demand that candidates be screened in the inaugural 2017 election for the city’s top leader.

Joshua Wong, a teenager who has become the protest movement’s most prominent leader, abandoned a nearly five-day hunger strike over the weekend on doctor’s orders. Four other members of his Scholarism group who had joined him have also ended their hunger strike.