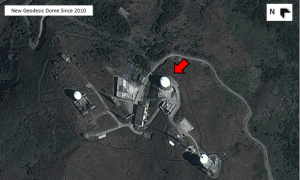 China's Military Spies on Hong Kong From Mountain Base
0 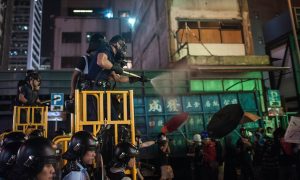 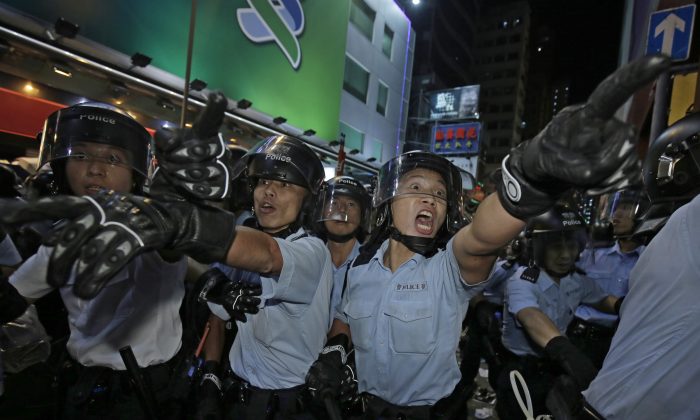 Police cleared the second-largest protest site held by pro-democracy demonstrators in Hong Kong on Wednesday morning in Hong Kong, with police rapidly making arrests, including two of the most prominent student leaders.

The clearing began in an orderly fashion. At 9:00 a.m. local time, court bailiffs read out loud an injunction ordering Nathan Road be cleared.

At approximately 9:30 a.m. members of the taxi cab associations who filed suit to have the clearing take place began slowly removing barricades, acting as volunteer officers of the court under the eyes of the bailiffs.

At around 10:20 a.m. police moved in and a kind of scrum developed, with police pushing against the protesters. Joshua Wong, the convener of the student organization Scholarism, and Lester Shum, the deputy secretary general of the Hong Kong Federation of Students were at the forefront of the protesters and were promptly arrested.

By around noon time. the police had finished clearing Nathan Road.

Held by protesters for almost two months, the 1,490 feet (455 meters) stretch of road between the once occupied section of Argyle Street and Dundas Street is a major thoroughfare in Kowloon Peninsula.

Public transportation and private vehicles use Nathan Road to get to Hong Kong Island. With plenty of businesses and shops on either side and largely working-class residents, Nathan Road is essentially a grittier version of New York City’s Fifth Avenue.

Losing Nathan Road today will most certainly diminish the pro-democracy protesters’ presence in Mong Kok, but it may not necessarily weaken the student-led movement, who are demanding fully democratic elections in Hong Kong and for hugely unpopular Chief Executive Leung Chun-ying to step down.

If Tuesday’s clearing of Argyle Street is anything to go by, the police attempt to drive protesters from Nathan Road could instead rally more supporters to the Occupy movement, which has been steadily losing public support over the past few weeks according to polls carried out by local universities.

After police violence in the afternoon on Tuesday, thousands joined the embattled pro-democracy demonstrators in Mong Kok by nightfall.

The Argyle Street clearing initially looked to be as much of a non-incident as the one outside government offices in Admiralty last week. The few protesters on the scene offered little resistance for most of the morning and early afternoon and even packed up their tents and belongings on their own accord.

Rather, it was the huge media crowd that private contractors hired by the plaintiffs to clear the street had to jostle with. Clad in white helmets and work gloves, the workers removed most of the wooden pallets and other material used as barricades under the gaze of hundreds of camera lens seeking to document the clearing, which progressed at a snail’s pace.

However, after protesters resorted to delaying tactics like asking for more time to remove their belongings, the authorities lost patience and started to push in. Police wielded riot shields, batons and pepper spray as they dispersed the crowd, and arrested several protesters, including pan democratic legislator “Long Hair” Leung Kwok-hung.

“Tomorrow will be the main event,” said lawmaker Albert Chan of the radical pro-democracy People Power party to the Associated Press after the afternoon’s scuffles. “There will be more people joining the resistance.”

MORE: China’s Military Spies on Hong Kong From Mountain Base

Chan’s prediction proved accurate as thousands of demonstrators surged into Mong Kok after working hours, and a chaotic night ensued. From the cleared Argyle Street, protesters spilled over to the adjacent Shanghai Street, Shantung Street, Portland Street, Soy Street, and Dundas Street. Police organized several baton charges throughout the night to push the protesters off these newly occupied zones, and at one point even used a tear spray (tear gas in spray form).

Instead of chasing the crowd away, police action only brought the Hong Kong citizens closer.

“I feel people are more united through tonight’s violence,” 27-year-old designer Tricia Ling told Washington Post. “It looks like people’s minds are back to the first week of the protest when we stood strong.”

In total, 116 people were arrested after the night’s start-stop fracas and about 20 police officers are injured.

“Even if they clear this place, our will to fight for genuine universal suffrage hasn’t changed,” protester Ken Chu, 27, wearing a bright yellow safety helmet and a gas mask, told Reuters. “It will only inspire people to think of other ways to continue this movement.”

Information from the Associated Press was used in this story.