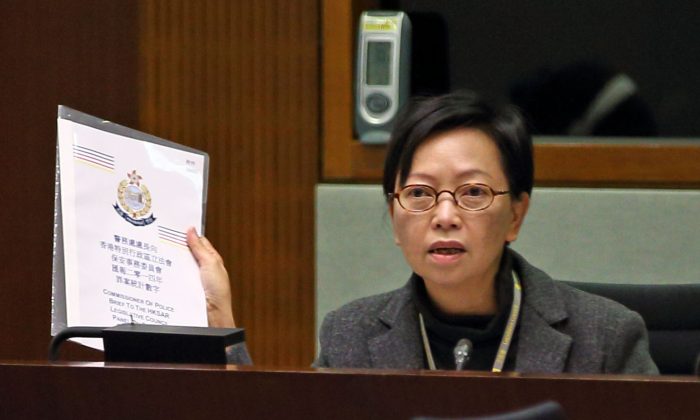 Crime rates are down, but the city’s increasingly mutinous, said the Hong Kong police chief. That’s because the police force has been misused as a political tool under your leadership, pro-democracy lawmakers replied.

In a legislature session Tuesday, police commissioner Andy Tsang reported that there were only 936 police cases per 100,000 people in 2014—a four-decade low crime rate.

Burglaries, however, supposedly rose in areas where protesters of the 79-day long Occupy street demonstrations set up camp, as the police were stretched out. Tsang gave no numbers to back the claim.

The crime rate also doesn’t include the people who surrendered to police post-Occupy, Tsang continued, so the figure is not reflective of the exact situation.

“This sense of lawlessness,” added the police chief, “does great harm to law and order in the long term.”

Pro-democracy lawmakers criticized Tsang and the police for casting the pro-democracy Umbrella Movement activists as criminals.

“But many of these protesters are well-educated people… they’re academics and lawmakers; your friends and relatives.”

It’s unfortunate that the police force has become a tool of political suppression, said Cheung.

And Hongkongers are starting to sense this political prosecution, said Labor Party vice chairwoman Cyd Ho, particularly in the case of a 14-year-old girl who chalked flowers on the pro-democracy “Lennon Wall.”

Police officers arrested the girl, detained her for 17 hours, and briefly confined her to a children’s home. Instead of charging the minor with a crime, however, police applied a court protection order, a move that would separate the girl from her father.

The police treatment of “chalk girl” led to a huge public outcry, with many feeling that the police were carrying out a politically-motivated “white terror” on behalf of the Hong Kong government.

“Under your leadership, the relationship between the Hong Kong police and residents has worsened,” said Democratic Party chairwoman Emily Lau. “Have you reflected on that, Police Commissioner?”

Tsang replied: “I hope that Hong Kong residents trust that the police have acted in accordance with the law, and the police wishes that residents abide by the law.”

Chief Justice Geoffrey Ma remarked at a ceremony to mark the new legal year that Hongkongers “overwhelmingly” respected the rule of law.

Conversely, it is the government that is in danger of abusing the rule of law, said Paul Shieh, the former chairman of the Hong Kong Bar Association, by continually insisting people to do things “according to the law.”

The Occupy protests started because Hongkongers felt that the government was not abiding by the Basic Law—Hong Kong’s mini-constitution—by backing a very restrictively Beijing ruling on how the city’s top leader would be elected.

Under the Basic Law, Hong Kong residents are allowed to nominate and elect their Chief Executive by universal suffrage. However, the Standing Committee of the National People’s Congress (NPCSC) tabled a reform package on Aug. 31 where only two or three candidates screened by a pro-Beijing nominating committee can stand for free elections.

The pro-democracy street protests may have ended, but police commissioner Andy Tsang continues working within the rigid legal framework that helped call it into being.