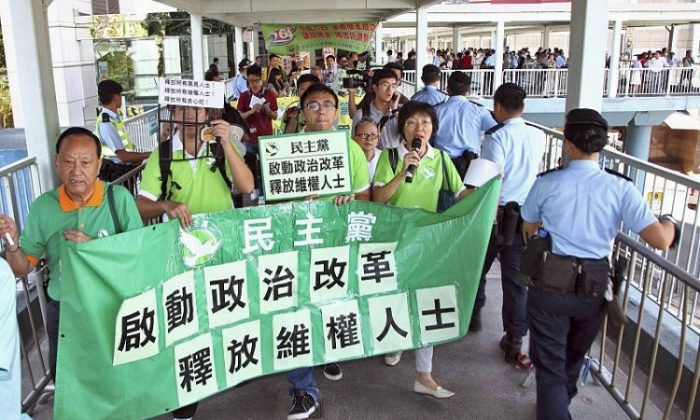 Demonstrating against the communist regime's tyranny, protesters are met by a police blockade in Hong Kong. (Courtesy of NTD Television)
China

Epoch Times Staff
View profile
Follow
biggersmaller
Print
When China’s vice premier concluded his three-day visit to the former British colony of Hong Kong, what marked his departure was not waving hands and friendly goodbyes but voices of protest and anger at the communist regime. And those voices were partly muffled by Hong Kong’s police.

While hosting the inauguration ceremony of the special administrative region’s new headquarters on his last day, Li Keqiang was faced with civil unrest that would probably have been suppressed by police forces if he were in mainland China.

Members of various rights organizations marched to the headquarters with protest banners to demand justice for the Tiananmen Square massacre two decades ago, to protest against the Chinese regime’s suppression of political dissidents and violation of religious freedom, and to call for political reform and human rights improvements.

Yet they arrived to the welcome of a large police blockade on an overhead walkway leading to the headquarters, preventing them from getting through. The protesters were determined to stay and several isolated clashes with the police occurred.

When three protesters from one organization, the League of Social Democrats, held up a prop coffin in commemoration of those who died in the Tiananmen Square massacre, a dozen policemen tried to grab the coffin, tore it apart, and confiscated the pieces.

“They said it was for security concerns, but they also leaked that higher authorities didn’t permit the coffin,” said Leung Kwok-hung, a Legislative Council member. “Whether Mr. Li Keqiang is happy or not is not of my concern. My concern is that this coffin represents the mourning for the Tiananmen Square massacre victims.”

The protesters pointed out that carrying a coffin violated no law.

“The Hong Kong government censors all the civil voices that are against the Chinese regime, such as those demanding justice for the Tiananmen Square massacre and seeking democracy,” said Lee Chaeuk-yan, the chairman of the Alliance.

Lee said that the Hong Kong authorities catered especially for Li Keqiang, to screen out messages that he would not want to hear. A consequence of this, Lee says, is to “push Hong Kong to become like any other Chinese city.”

Hong Kong, which was under British rule since the First Opium War in the 19th century, was not handed back to the communist-controlled China until 1997. Ever since its handover the city has been deemed a Special Administrative Region, and it enjoys relative autonomy and holds elections, unlike the rest of China.

Director of Hong Kong Human Rights Monitor, Law Yuk-Kai, said that similar incidents to the recent fracas have happened before.

“The police are not allowed to prohibit the freedom of expression … using security as an excuse,” he said. “I think the police need to explain why they have acted this way.”

The Hong Kong Commissioner of Police Tsang Wai Hung admitted to reporters afterward that the Hong Kong police had mobilized at least 2,000 officers every day for the past three days.