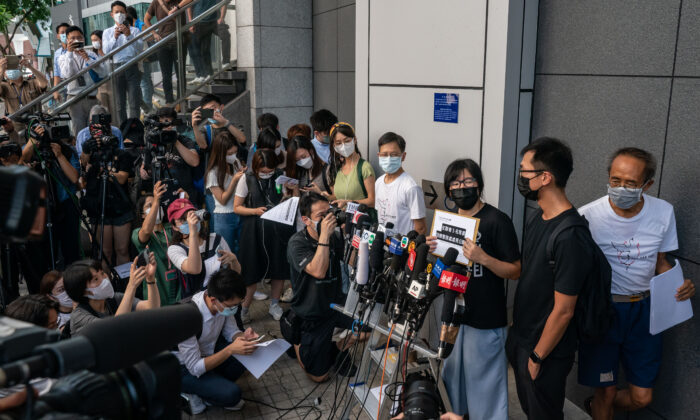 Hong Kong police on Wednesday morning arrested four leaders of a pro-democracy group, alleging the group was working as a “foreign agent.”

The Hong Kong Alliance in Support of Patriotic Democratic Movements of China is known for organizing the city’s annual vigil commemorating those who died in Beijing’s Tiananmen Square massacre in 1989.

The Hong Kong police sent a letter to the group last month, citing the national security law introduced by Beijing last year. The police alleged the group to be a “foreign agent” and requested it hand over its membership and financial information no later than Sept. 7. In response, the group went to the Wan Chai Police Headquarters, stated the request was based on “reasonable grounds to believe,” which has no justification thus refused the request. On Sept. 8, Wednesday morning, the police went to Chow’s work office in the Bank of America Tower to arrest her. According to the group, several standing committee members were subsequently arrested, including Leung, Tang, and Chan.

Chow was broadcasting live on Facebook early Wednesday morning, showing the police were ringing her doorbell and attempting to open her door. Leung’s arrest footage was also broadcast live.

Later, Chow posted a series of messages saying that someone was slamming her keypad at the door and questioned if it was a daytime robbery. Chow is a prominent barrister in Hong Kong; she was originally scheduled to represent Gwyneth Ho, a Hong Kong politician charged with “conspiring to subvert state power,” in high court to apply for her bail. Chow was preparing for Ho’s bail statement in her office overnight before the police came for her arrest. She later expressed regret for not being able to represent Ho.

Before Chow’s arrest, she posted a photo of the sunrise in Victoria Harbour from her office, suggesting that this may be “[her] last time to look at this scenery.” At the same time, many people left messages on her post wishing for her return.

In the evening after Chow’s arrest, her assistant updated her Facebook and wrote: “We shall argue with reasons for our beliefs with utmost efforts and without fear and regret.” Chow’s updated Facebook page suggested she is in good spirit and had already met with her lawyer. Chow showed great concern for her colleagues in custody, as well as the plea sessions in the coming two days of the defendants in the “unauthorized assembly” case over the June 4 candlelight vigil in 2020.

The police stated that the four (Chow, Leung, Tang, and Chan) were arrested for “failure to comply with the submission requirements” under Article 43 of the Hong Kong national security law. It suggests that more people may be charged.

Timeline of the Arrest

On Aug. 25, the National Security Department of the Hong Kong Police Force sent a letter to the pro-democracy group requesting it to hand over sensitive information citing the national security law. The group’s standing committee went to the Wan Chai Police Headquarters to deliver a response letter, stating refusal and denying being a foreign agent. The group criticized the Hong Kong police for failing to provide any justification and for violating the principles of natural justice.

The group’s Standing Committee member, Tsui Hon-Kwong, requested the high court to rule the police letter invalid. “The group’s full name is the Hong Kong Alliance in Support of Patriotic Democratic Movements of China,” Tsui said to the media in front of the police headquarters, adding that they are patriots and not foreign agents.

Chow was also at the police headquarters. “To the people of Hong Kong: You must continue to fight. Don’t cave to authoritarian power, don’t live in humility. Be yourself and live with your conscience,” he said.

Chris Tang, the Secretary for Security in Hong Kong, stated on Sept. 7 that if someone fails to hand over information as required by the Hong Kong police, swift enforcement action will be taken. The police also issued a press release denouncing “[unnamed] groups blatantly refuse to submit information” and reiterated that the groups could be fined $15,500 and imprisoned for six months if they failed to submit information on time.

One of the founding principles of the Hong Kong Alliance in Support of Patriotic Democratic Movements of China is “ending [China’s] single-party system.”

The pro-democracy group was harassed and threatened repeatedly by the Hong Kong police, government officials, and the Chinese state-owned media. There were rumors that its standing committee could dissolve the group; it held a press conference on Sept. 5, stating that it would hold a special meeting on Sept. 25 to discuss the topic. However, the group is designed so that members can still elect a new chairman at its meeting even if the standing committee members are arrested. According to Chow, there are still more than 100 members in the group, and to disband the group, at least 20 members must be present, and 70 percent of the members present must agree.

After Beijing implemented the national security law in Hong Kong, the pro-communist faction claimed that one of the five principles of the pro-democracy group violated the law. In June of this year, Luo Huining, Director of the Liaison Office of the Chinese Communist Party (CCP) in Hong Kong, declared that “ending the single-party system” destroys the foundation of “one country, two systems,” and is, therefore, the enemy of Kong Hong’s prosperity and stability. However, the pro-democracy group has reiterated that it will not change its principles and guidelines under political pressure.

On May 20, 1989, the CCP declared martial law in Beijing, which triggered a march on May 21 by millions of Hong Kong people, accounting for about one-fifth of Hong Kong’s population. The Hong Kong Alliance in Support of Patriotic Democratic Movements of China was established on May 21, 1989, in the then British colony of Hong Kong during the massive protest demonstration, with Szeto Wah, a veteran of the Hong Kong democracy movement, as its first leader.

After the June 4 Tiananmen Square massacre in Beijing, the group’s primary goals have been to rehabilitate the democracy movement and hold the CCP accountable. Since then, every year, on the evening of June 4, the group has held a candlelight commemorative event at Victoria Park.

Despite gathering restrictions caused by CCP (Chinese Communist Party) virus, the group still held an event last year, which led to the arrest of 24 pro-democracy individuals with alleged crimes of “assembling without approval.” Its then chairman, Lee Cheuk-yan, and vice-chairman, Albert Ho, were also imprisoned for participating in the demonstrations and assemblies.