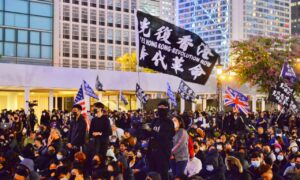 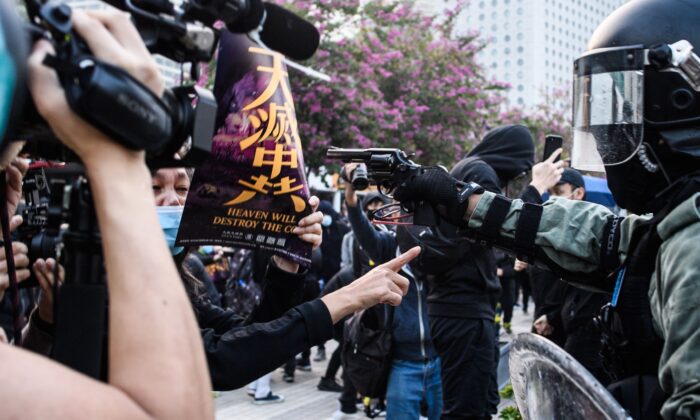 A police officer points a pistol during a rally in Hong Kong on Dec. 22, 2019. (Anthony Wallace/AFP/Getty Images)
HK Protests

In a stunning show of defiance, an unarmed Hong Kong protester held up a poster produced by The Epoch Times’ Hong Kong edition while gesturing at a police officer who had pointed a pistol towards her.

The Epoch Times has been unable to identify the woman, but understands that the police did not fire the weapon and that the protester safely left the protest scene on Dec. 22.

The poster contains a message that has become popular among Hong Kong protesters, reading “Heaven Will Destroy the CCP [the Chinese Communist Party],” in both Chinese and English. The slogan has spread to street corners, walls, and artworks in Hong Kong amid pro-democracy protests in recent months.

One protester previously explained the slogan’s meaning as “may God have mercy to break down the Communist Party.”

“We want the CCP [to] completely break down,” he said.

"We've heard the protesters just now chanting something called 'Tian mie zhong gong,' what does that mean?"@news_ntd's @PaulGreaney_ asks the meaning of what #HongKongProtesters are chanting, "may God have mercy to break down the communist party." pic.twitter.com/McykXoztiw

The incident on Sunday was one of the latest in more than six months of Hong Kong protests in anger against what they see as the Chinese regime’s growing encroachment into the city’s affairs. Protesters have consistently called for five demands, including genuine universal suffrage and an independent investigation into alleged police brutality.

Protesters organized the Sunday rally in support of the suppressed Uyghur minority in China’s northwestern region of Xinjiang. That day, police also arrested at least two protesters attempting to burn a Chinese flag and used batons and pepper spray to disperse others.

Delivering Truth From the Frontline

Reporters from The Epoch Times have been reporting on the ground since day one of the pro-democracy protests in June to deliver independent and uncensored information about the movement to the people of Hong Kong, China, and the rest of the world.

The independent reporting, however, comes at a price.

Last month, four masked intruders set fire to the printing shop of the Hong Kong edition of The Epoch Times, an incident that bore the hallmarks of the Chinese regime’s tactics.

Two of the men carrying retractable batons intimidated printing press staff, before the other two proceeded to pour a flammable liquid on the factory floor to create a fire. The fire damaged at least two printing machines and four rolls of printing paper.

The printing warehouse has experienced multiple attacks prior to the arson. The incident remains under investigation.

The attack prompted harsh criticism from U.S. lawmakers and advocacy groups, who called on authorities to investigate the incident.

“Police should take immediate steps to apprehend those responsible for torching the Epoch Times printing plant, and ensure they are held to account,” said Steven Butler, Asia Program Coordinator for the Committee to Protect Journalists in a Nov. 22 statement.

In response to the arson, Sen. Josh Hawley (R-Mo.) said: “Any assault on the freedom of the press is an assault of the liberty that was promised to the people of Hong Kong.”

“It’s an assault to the basic function of a democracy.”

“Only a totalitarian regime is afraid of what is written by the press,” Sen. Bob Menendez (D-N.J.) said of the incident.

In April this year, 7-Eleven in Hong Kong (the Hong Kong franchise has no relation to the U.S.-headquartered company) abruptly canceled its distribution contract with The Epoch Times Hong Kong edition and pulled the newspapers from the shelves.

Cédric Alviani, the East Asia bureau director of Reporters Without Borders, observed at the time that he “can’t see any reason but the pressure from the Chinese authorities for this withdrawal.”

Reporters from Epoch Media Group, which The Epoch Times is part of, have also had close encounters with tear gas and water cannons at the frontline.

Dingding Ou, who reported during live streams of the protests for The Epoch Times’ affiliate NTD, was hit by tear gas canisters and fainted during a live broadcast of an August protest after breathing in the tear gas.

“Even though the police clearance operations could be violent, we still want to deliver the truthful, firsthand information to the audience,” she said after the incident.

Frank Fang from The Epoch Times’ Taiwan bureau, while covering clashes between police and protesters in Mong Kok on Tuesday night, was subjected to tear gas used by police to disperse demonstrators. “I feel like the smell of tear gas is still in my nose or lungs,” he said hours after the clashes. That night, police also fired a water cannon in the direction of about a dozen protesters.

“It is truly moving and humbling for us to see how brave the Hong Kong people are, and the important role that The Epoch Times’ independent information plays,” said Jasper Fakkert, Editor-in-Chief of the U.S. editions of the newspaper.

Fakkert said that The Epoch Times’ reporting in Hong Kong speaks to the core mission of the newspaper, which is to provide the truth to readers.

“Our motto is Truth and Tradition, and the way our reporters and readers alike risk their lives in Hong Kong is a clear example of this,” Fakkert said.

“The Epoch Times is a truly independent media. We are free from the influence of any government, corporation, or political party—this is what makes us truly different.”

The Hong Kong edition has also stood out as one of the few newspapers in the city that has consistently refused to cave in to pressure from the communist regime.

On Nov. 12, for example, six out of eight local media carried an advertisement on their front page appealing for voters to “oppose rioting”—a label used by the regime propaganda outlets to characterize the protests—while The Epoch Times chose to cover the police siege of the Chinese University of Hong Kong that occurred the night earlier.

As a result of its independent reporting, The Epoch Times has seen a sharp increase in readership in Hong Kong, as well as around the world.

Media Attacks Against The Epoch Times in the US

But while in Hong Kong Epoch Times reporters are risking their lives, and our press has been set on fire, in the United States there have been multiple media attacks against The Epoch Times in recent months.

In August, NBC News made multiple false claims about The Epoch Times—repeating in part propaganda produced by the Chinese Communist Party—resulting in The Epoch Times losing its ability to advertise its content and products on Facebook.

Beginning on Dec. 20, media organizations in the United States and around the world reported on inaccurate claims by Facebook that the Epoch Media Group is connected to a media company whom it had punished for inauthentic behavior.

“The Epoch Times is an independent media organization. Which means that our reporting is oftentimes different from other media. We can’t speak to the motives of other media organizations, but we are disappointed by the continued inaccurate reporting about us,” said Stephen Gregory, publisher of the English language editions in the United States.

In a Nov. 15 letter to Facebook CEO Mark Zuckerberg, Rep. Jim Banks (R-Ind.) raised concerns about the CCP’s efforts to stifle dissenting voices in the West.

“The rest of the world needs a Chinese dissident paper now more than ever,” he wrote in the letter. “American companies should support America’s values—not China’s.