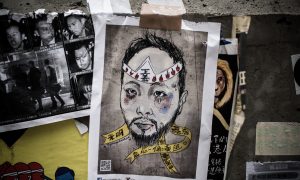 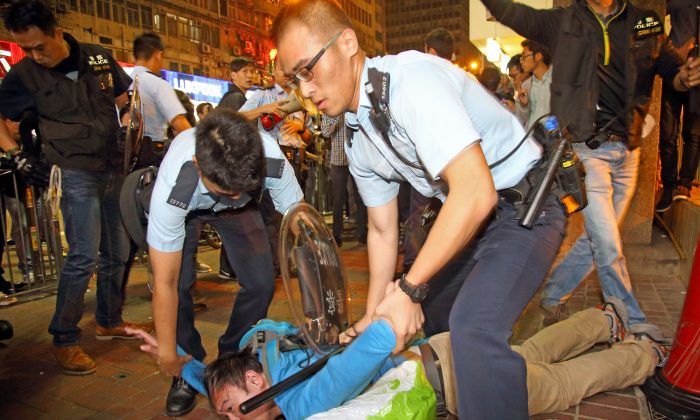 In Hong Kong, two pedestrians are going through the courts to claim compensation for alleged acts of police violence towards them after a main pro-democracy protest site was cleared in November.

The pair claimed in their writs that police brutally assaulted them in Mong Kok, a gritty shopping district in Kowloon Peninsula, after the authorities evicted the pro-democracy Umbrella Movement protesters—who had held key streets for about two months—on Nov. 24 and Nov. 25.

Lau claims in a writ that police assaulted him on a pavement between Soy Street and Nathan Road on the night of Nov. 26. According to an article attached to the court documents, which cites video footage captured by an Epoch Times reporter in Hong Kong, Lau was kicked and kneed by police officers.

After his arrest, Lau was “unlawfully” detained for two hours, and could only go to the hospital after police released him.

Meanwhile, in the early morning of Nov. 27, Yu was allegedly pushed to the ground and had her head pressed against metal railings on the roadside “with great force,” according to a writ.

Yu was also “indecently assaulted” by a male officer and roughed up by a female officer. The student’s allegations are backed by a medical report submitted with the writ.

Lau and Yu claim that the police beatings can be considered to be “torture,” and constitutes a serious violations of human rights. The police acts are also unlawful under the Basic Law—Hong Kong’s mini-constitution—the Bill of Rights, and police’s statutory duties, according to the writs.

It is unclear if police deliberately targeted the two pedestrians after the Mong Kok clearance, or if it was simply a case of mistaken identity.

According to SCMP, a policeman spokesman said they will be reviewing both cases.

Hong Kong’s police force, once regarded as the finest in the region and trusted by Hongkongers, came under intense scrutiny and were heavily criticized during the Occupy protests for seemingly acting in an out of control fashion.

Reports and anecdotes on police brutality towards student and resident protesters, members of the press, and even a politician—Civic Party’s Ken Tsang beaten by seven policemen at a “dark corner”—were widely circulated on both social and traditional media during the nearly three-month long and largely peaceful street protests for fuller democracy in the semiautonomous Chinese city.

Meanwhile, the police failed to apprehend or chose to ignore cases where anti-Occupy, “blue ribbon” supporters were attacked or harassed by pro-democracy protesters. In a high profile case early on in the Occupy sit-in, police turned a blind eye while pro-Beijing triad members assaulted student protesters.

Pro-democracy supporters, concerned parents of student demonstrators, local and international human rights groups, as well as Hong Kong’s pan-democrat lawmakers, all have condemned the excessive use of force by the police during the clearing of protest sites.