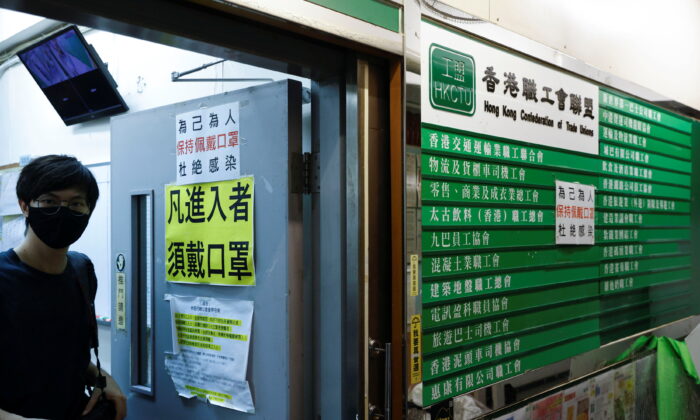 HONG KONG—Hong Kong opposition trade union coalition, the Hong Kong Confederation of Trade Unions, said on Sunday it would disband, adding to several civil society organisations that have ceased operating in the financial hub this year.

“We want to apologise to the people of Hong Kong that we cannot continue,” Wong said tearfully, adding that some members had recently received messages threatening their safety.

Concerns have deepened over a crackdown on political and other universal freedoms in the Asian financial hub since Beijing imposed a sweeping national security law on the city last year, stoking fears about the shrinking space for dissent.

Hong Kong leader Carrie Lam has denied that her pro-Beijing government is carrying out a crackdown on civil society, and authorities say all law enforcement actions have been based on evidence and have nothing to do with the political beliefs of those arrested.

The HKCTU says that it represents more than 93 affiliated organisations and that its duties include organising independent trade unions, resolving labour disputes, and providing vocational training and education for workers.

During Hong Kong’s anti-government protests in 2019 it ran crash courses about establishing unions for the many new organizations that were created at that time, partly in an effort to protect workers from being punished by employers for expressing their views.

HKCTU co-founder Lee Cheuk-yan is in jail over his role in the protests, while its chief executive, Mung Siu Tat, announced on Facebook that he had left Hong Kong.

Hong Kong’s largest teachers’ union also an HKCTU affiliate, last month announced it would disband after the city’s Education Bureau severed ties and accused the group of helping to infiltrate schools with politics.