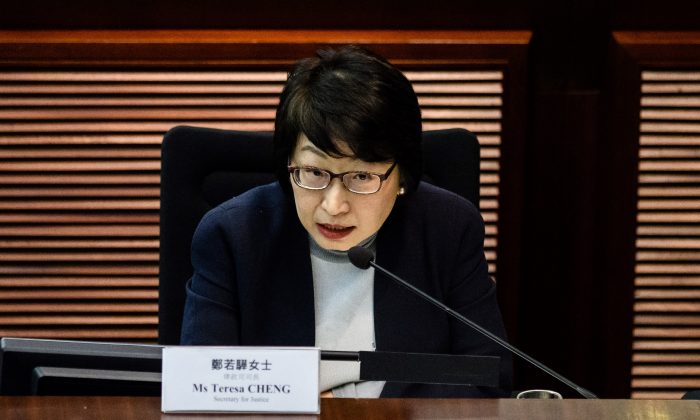 Hong Kong’s justice secretary Teresa Cheng, a chief backer of the controversial extradition bill before it was suspended, is traveling to Beijing on a four-day visit, amid simmering tensions between protesters and police in the Asian financial hub.

Cheng will meet with representatives from China’s Ministry of Justice, Ministry of Foreign Affairs, and the Supreme People’s Court, the country’s highest court, on July 18, to discuss “affairs regarding the collaboration between Hong Kong and mainland China in laws and conflict-solving,” Cheng told reporters before departing on Wednesday.

Cheng, appointed by Hong Kong’s leader Carrie Lam in January 2018, was one of two top officials in charge of the extradition bill’s legislative process, the other being security chief John Lee.

The bill, if passed, would allow Hong Kong to detain and transfer people wanted in countries and territories with which it has no formal extradition deals, including Taiwan and mainland China. It drew widespread opposition, with many Hongkongers fearing that it would allow Beijing to punish dissidents on political charges and expose them to China’s opaque judicial system.

After mounting public backlash, Lam suspended the bill in mid-June. Protesters have demanded the bill’s full withdrawal, and have continued to organize demonstrations, some which recently resulted in violent clashes with police.

The Hong Kong government did not provide further details about Cheng’s visit. But it comes amid increasingly heated protests, with Hongkongers expressing severe distrust of the government.

Most recently, on Sunday, July 14, an estimated 115,000 took to the streets of the Sha Tin district. The largely peaceful march, however, descended into chaos after police began chasing after demonstrators who entered a luxury shopping mall. Police also blocked pathways to the nearby subway station, preventing protesters from leaving the premises.

Dozens of police and protesters were injured. Police made 47 arrests, while local rights groups condemned police tactics, calling their methods a purposeful besieging of protesters.

At a July 17 presser, Chinese Foreign Ministry spokesman Geng Shuang said that he was “not aware of the situation” when questioned on the reasons behind Cheng’s meeting with foreign ministry officials.

Hongkongers have most often criticized Lam, Cheng, and Lee for pushing the extradition bill.

In a poll conducted between July 2 and July 8 by the Hong Kong Public Opinion Research Institute, which surveyed 1,025 Hongkongers on how they viewed the city’s top officials, those three were the most unpopular, with Cheng registering the lowest approval rating, at 10 percent.

Cheng, a firm proponent of the bill before it was suspended, played a major role in the Lam administration’s attempts to fast-track the bill through the city’s legislative process. She acted as the administration’s chief spokesperson for the bill.

The Hong Kong government first proposed it in February, citing the need for an urgent legislation to allow the transfer of a Hong Kong citizen to Taiwan, where he was wanted for murder.

The bill had stagnated in the city’s Legislative Council (LegCo) for months amid filibustering by lawmakers from the pro-democracy camp, and opposition from business and legal sectors.

In early May, Cheng shot down alternative legal proposals by lawmakers to allow for the extradition of the murder suspect, saying that they were “impracticable.”

The three officials, meanwhile, have on different occasions dodged reporters’ questions about whether they would step down as demanded by protesters, citing intentions to continue serving Hong Kong society.

Cheng’s visit has raised Hongkongers’ speculations about the true purpose of her meeting, given the current extradition bill crisis.

Beijing has lashed out at protesters and foreign governments that have voiced support for the movement and urged the Chinese regime to respect the city’s autonomy. Beijing called them “foreign forces” that have tried to “subvert China” in several strongly-worded statements.

Meanwhile, observers have analyzed why Lam has refused to withdraw the bill as protesters have demanded.

“[Lam] has said the bill ‘has come to natural death,’ so why can’t [she] just say it’s been withdrawn? If you think about it, you will come to understand that it’s the Chinese Communist Party [CCP] that has blocked her from doing so,” media commentator Simon Lau Sai Leung told the Hong Kong bureau of The Epoch Times in a July 16 interview. Lau formerly served as a member of an advisory body to the city government.

Lam had announced on July 9 that the bill was “dead,” but would not say that she would retract it.

“The CCP values the most its authority, and the bill’s withdrawal would devastate the absolute authority of the Party,” Lau said, adding that Beijing might have forbidden Lam from making other concessions to protesters’ demands, such as establishing an independent commission to investigate police use of force during recent protests.