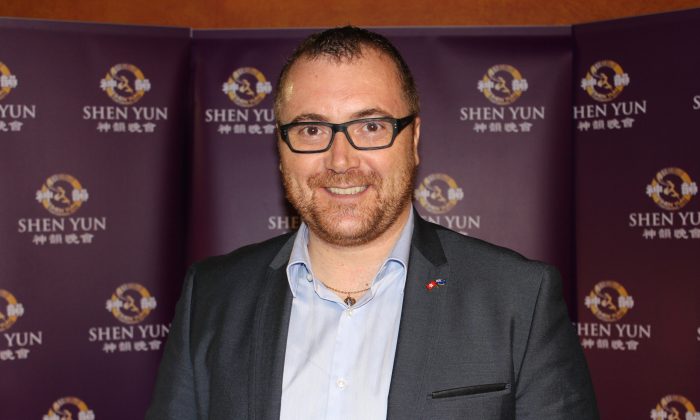 Luca De Leonardis hopes one day Shen Yun will perform in China. He saw Shen Yun at Capitol Theatre in Sydney and was enthralled, on Feb. 6, 2015. (Courtesy of NTD Television)

He hoped one day Chinese people would see Shen Yun in their own country as it would help them understand China’s historic past.

“It’s like a country that was probably something greater, with a soul—a big soul,” Mr. De Leonardis said. “We all hope that one day there will be the possibility for Chinese [people] to see the show in their own country, so fingers crossed.”

China was once known as Shen Zhou—The Divine Land, says Shen Yun’s website. “This profound name describes a land where deities and mortals coexisted, and a belief that the divine transmitted a rich culture to the people of the earth.

“For thousands of years, Buddhist, Taoist, and other disciplines were at the heart of society. Calligraphy, music, medicine, attire, and much more were said to have been passed down from the heaven,” the website continued.

Mr. De Leonardis said he could see the ancient Chinese culture exuding from the performances and the artists.

Mr. De Leonardis is head of Invest Hong Kong for Australia & New Zealand for the Hong Kong Economic and Trade Office in Sydney.

Ms. Tzortzis said the performance was brilliantly put together.

“I thought it was really phenomenal the way they have been able to capture thousands of years of history and all these various provinces from across China, and the theme with the interactive multi-media display in the backdrops made it much more,” Ms. Tzortzis said.

According to the Shen Yun website, state-of-the-art graphics technology creates “vividly animated settings, extending the stage transporting the audience to a world where heaven and earth are one.”

Classical Chinese dance is at the heart of what Shen Yun does. Incorporating incredible flips and spins, and gentle elegance, it is one of the most rigorous and expressive dance forms in the world.

Ms. Beevers was impressed. “Pretty beautiful, I loved it—was very impressive,” she said. “I was really mesmerized, it really captured me just following the dancers, their movements. It’s just so beautiful the way they all moved together, just the beauty of it.”

She was appreciative of the heritage of classical Chinese dance and its influence throughout the world.

“Oh the music, having the orchestra there and the drums on stage, it makes such a difference to have live music,” she said.