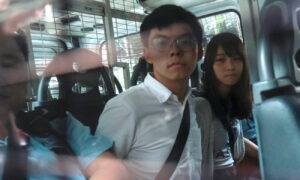 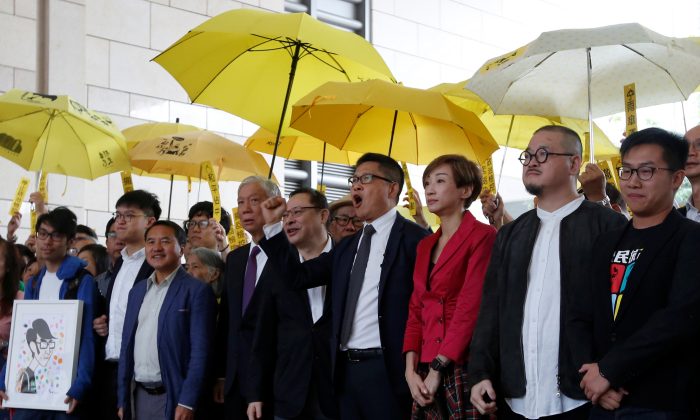 The closely watched trial illustrates the tensions in the former British colony as disaffected democracy activists push back against attempts by Communist Party leaders in Beijing to tighten their grip on the city’s freedoms and autonomy.

Each charge carries a maximum jail term of seven years. Six others, including two lawmakers, are also facing public nuisance charges in a trial that is expected to last around 20 days.

In a show of defiance, the nine defendants and more than 100 supporters unfurled yellow umbrellas, a symbol of the movement, outside the court, clapping and demanding an end to “political prosecution.”

“A movement can be crushed but not defeated,” the nine said in a joint statement. “These charges enable the government to abuse the power of prosecution and infringe on the freedom of speech and peaceful assembly. The nine defendants unanimously decided not to plead guilty.”

Tai told Reuters he hoped the trial would be an opportunity to “reboot the spirit of the people.”

Hong Kong returned to Chinese rule in 1997 under a “one country, two systems” formula, with the guarantee of a high degree of autonomy and freedoms denied citizens in mainland China, including freedom of speech and the right to protest.

However, critics, including foreign governments, business groups and activists, say that the guarantee is ringing increasingly hollow.

The court heard how in 2013, Tai, Chan and Chu began promulgating and planning a non-violent civil disobedience campaign to occupy streets in the Central business district should China not allow a democratic vote for its next leader.

The “Occupy” campaign germinated in September 2014, ahead of schedule, and became part of what grew into the biggest populist challenge to Beijing since the Tiananmen Square demonstrations in Beijing in 1989.

Hundreds of thousands of people, including many youngsters and students, took to the streets in sustained occupation of major streets.

Government prosecutor Andrew Bruce detailed in court how the three “Occupy” leaders had given speeches and interviews urging more people to join the “unlawful occupations.”

He said this had been a “joint enterprise” to conspire with others to try to fuel the movement for a “prolonged and indefinite” time.

Lawyers for the defendants, however, questioned the basis for this allegation.

“Even if the court finds us guilty, history will show that we committed no crime,” Cheung, now a columnist, told reporters.

Some critics say the case could have repercussions for hundreds of other protesters who have not been charged, and create a chilling effect on the Hong Kong democracy movement.

The U.S.-China Economic and Security Review Commission warned in a report to Congress last week that the Chinese regime had “ramped up its interference” in Hong Kong and had “closed down the political space for pro-democracy activists to express discontent.”

A senior Financial Times journalist, Victor Mallet, was barred from the city this month after he helped host an independence activist at the Foreign Correspondents’ Club in what critics said was an attack on freedom of speech.

Hong Kong leader Carrie Lam has repeatedly stressed Hong Kong respects media and other freedoms but has so far refused to give an explanation for denying Mallet entry.