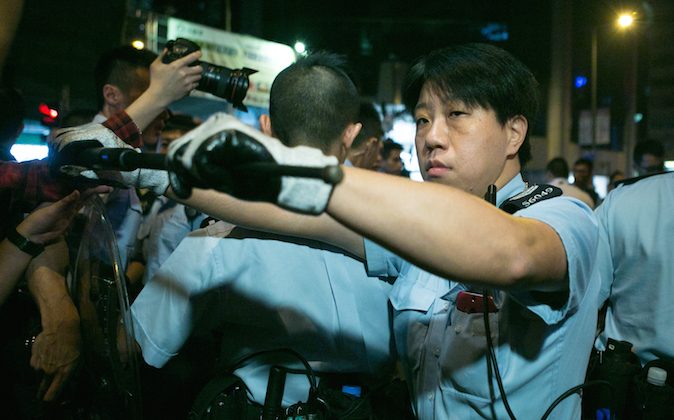 A police officer is holding back and blocking the media as a protester is on the ground being arrest after a clash with the police in Monk Kok, Hong Kong, on Nov. 6, 2014. (Benjamin Chasteen/Epoch Times)
China

The police were probably there to keep an eye on the protesters who were holding a Million Mask March to commemorate Nov. 5, Guy Fawkes day.

Donning “V for Vendetta” Guy Fawkes masks and holding mini “Lion Rock” banners with the words “I want genuine universal suffrage” written on them, the protesters carried out a “Million Masks March” under the watchful gaze of the Hong Kong police.

Seemingly without warning, the police moved in on the student protesters on Argyle Street at about 12 a.m. HKT (11 a.m. EST), Nov. 6.

The police move on mong kok this fine evening couldnt have been more predictable. Argyle was unguarded and quickly fell. #Occupyhk

There were also a number of unconfirmed reports about police making arrests.

Epoch Times photographer Ben Chasteen says that the police were rather tense to begin with due to the “Millions Mask March.”

The standoff was sparked after a photographer’s flash went off in Mong Kok. Policemen pulled the photographer over and arrested him, which then agitated the masked crowd.

After some shouting, things escalated into yet another police-protester confrontation.

See below for the live blog. All times are in Hong Kong Time, which is 11 hours ahead of Eastern Standard Time.

Updates to follow, check back shortly for the latest on the ground in Mong Kok.

Protester pulled back by others when pushing police cordon. Police draw back. #umhk https://t.co/sbTCYPb4cP