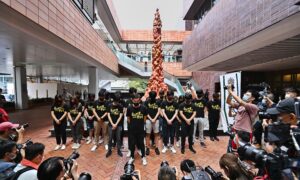 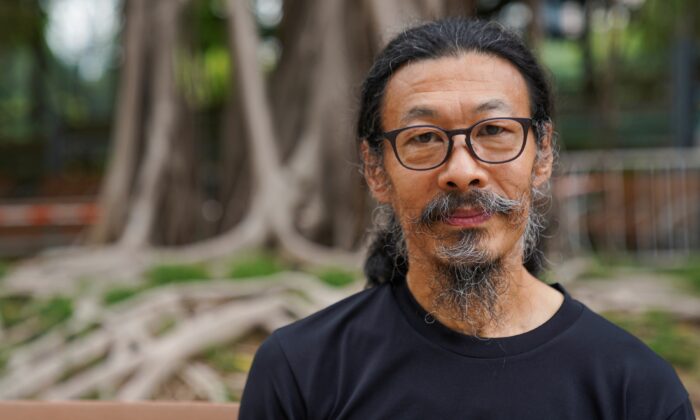 Labor rights activist and Tiananmen protester Han Dongfang poses for a picture outside Victoria Park on the 32nd anniversary of the massacre of pro-democracy demonstrators at Beijing's Tiananmen Square in 1989, in Hong Kong, on June 4, 2021. (Lam Yik/Reuters)
China Human Rights

HONG KONG—Han Dongfang, a veteran Tiananmen Square activist, says Hong Kong should not lose heart despite a heavy China-led crackdown on its freedoms, as he defied police warnings and sat quietly on a park bench to commemorate the victims of June 4.

Han, who was almost killed when Chinese soldiers opened fire on pro-democracy protesters in Beijing in 1989, and was then jailed and forced into exile, was one of the few people in Hong Kong’s Victoria Park on Friday afternoon, ignoring a police ban on an annual candlelight vigil, ostensibly imposed as part of coronavirus restrictions.

Clad in a black T-shirt and yellow mask to ward off the virus, and seated next to an old banyan tree, Han spoke of the importance of keeping truths alive, and of not succumbing to fear.

“Today, I just feel like being here,” the 58-year-old, with a long salt and pepper beard, and bushy moustache, told Reuters.

Surrounded by dozens of police who were conducting body searches and identity checks on some passersby, Han remained resolute on the tragedy that has consumed much of his life.

Despite Hong Kong’s crackdown under the new national security law, imposed last June, Han was upbeat on his adopted home city of 28 years where he runs a labor non-governmental group.

“I was there in 1989 on June 4 in Tiananmen Square. I saw fire, I saw the bullets, I saw blood … But throughout these things, Hong Kong is still Hong Kong. We are still privileged. It’s a place that still has quite a big space, and don’t tell yourself there’s no more space,” he said.

“Before your last breath, don’t tell yourself you are dead.”

Chow Hang Tung, one of the organizers of the Hong Kong vigil was arrested early on Friday and police warned of further detentions if people violated the ban on unauthorized assemblies.

Han acknowledged the dangers but said people were looking to do something dignified and meaningful.

And while the park might not be filled with tens of thousands of people for the first time in 32 years after police cordoned off the football pitches where most people gather, Han remained confident the historical record would be preserved.

“One important thing is, whatever happens don’t scare yourself,” he said.

“Don’t tell yourself there’s no light, particularly if you are in a dark tunnel. That doesn’t help. There must be light at the end of the tunnel.”