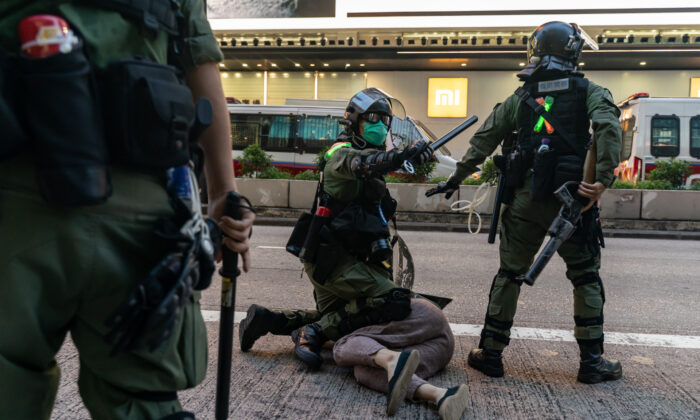 Chung Kim-wah, Deputy Chief Executive Officer of Hong Kong Public Opinion Research Institute (HKPORI), announced on April 24 that he was leaving Hong Kong for the UK. He posted on social media: “I Don’t want to be a deserter, but I have to avoid tyranny.” Before leaving Hong Kong, Chung Kim-wah and HKPORI were repeatedly pressured by the Hong Kong Government and the Chinese Communist Party (CCP) ‘s mouthpiece media. He was repeatedly summoned by the police under the Hong Kong National Security Law and was followed by unidentified vehicles.

After arriving in the UK, Chung Kim-wah accepted an interview with The Epoch Times’s Precious Dialogues program on April 25. He said he decided to leave Hong Kong in February this year because he could no longer speak safely and had to leave before being accused of some wrongdoing by the regime. “I don’t want to lose my freedom to think and speak, I don’t want my elderly parents to worry about unfortunate events that may happen to me, or to visit me in a detention center, these are the hardest thing for me to bear.”

He pointed out that the overall environment in Hong Kong is becoming more and more unsafe. Even the veteran media person Allan Au was arrested. Two girls from a milk tea shop were arrested for posting a call for no vaccinations on Facebook, and were not allowed bail. He said that this year, on the eve of the 25th anniversary of the handover of sovereignty that occurred on July 1, 1997, “In May and June, Hong Kong’s ‘minded’ people and the national security police may do a lot more outrageous things.”

Chung Kim-wah said frankly: “Actually I couldn’t bear to leave Hong Kong, and previously had never thought of immigration. I cried until I was dizzy. I wrote a few poems at the airport yesterday. I wrote with tears. I wrote my Facebook articles on the plane, tears after tears until getting off the plane.”

The article he posted on Facebook was titled “I don’t want to be a deserter, but I have to avoid tyranny.” He wrote that he had never planned to immigrate, “My lifetime ambition and responsibility are all in Hong Kong. But at present, there is no space for sincere words, only lies and lies. For those of us who are still a bit turbulent, Hong Kong may not be a place where we can live normally without intimidation.”

Chung Kim-wah also revealed that he had been interviewed by the National Security Department three times and asked to assist in investigations. The first time was in 2020. When HKPORI conducted a poll for the Pro-democracy primaries, the HKPORI office was raided by the police. The most recent incident occurred in March this year, when a CCP mouthpiece media quoted a fake questionnaire, claiming the HKPORI’s investigation on Hong Kong people’s opinions on the Ukraine-Russia war violated the National Security Law. Chung Kim-wah emphasized that he was neither charged nor admonished by the police, and was by no means “absconding in fear of crime,” but it was undeniable that frequent interviews by the police were one of the reasons he considered leaving. He also mentioned that he was being followed by two unidentified vehicles while driving his car a few months ago.

For many years Chung Kim-wah taught at the university, and currently serves as the Deputy Chief Executive of HKPORI, a well-known polling organization in Hong Kong. Its predecessor was the Public Opinion Programme of the University of Hong Kong, established in 1991.

In recent years, HKPORI has been repeatedly attacked by the pro-communist camp. In 2020, HKPORI conducted polls for the Pro-democracy primaries, and the office was raided by the police. The 47 people who organized and participated in the primary election were later charged with “conspiracy to subvert state power” under the National Security Law.

In November last year, before the first Legislative Council election after the CCP changed Hong Kong’s electoral system, HKPORI conducted a poll on citizens’ voting intentions. The poll options included blank votes and no votes. The authorities said the poll incited others to leave their vote blank or to not vote at all, violating the newly revised Election Regulations. At the same time, the People’s Daily, the mouthpiece of the CCP, also published an article slandering HKPORI for “anti-China disruptors in Hong Kong” and “incitement with academic cloak.”

Last month, HKPORI investigated the Hong Kong people’s views on the Russia-Ukraine war, but the CCP mouthpiece media quoted a fake questionnaire to discredit it, claiming that HKPORI violated the Hong Kong National Security Law, and HKPORI was forced to cancel publication of the poll result.

Chung Ting-yiu, Chief Executive Officer of HKPORI, responded to the Epoch Times’s inquiry by email on April 25, saying that HKPORI is currently operating as usual, and Chung Kim-wah will continue to serve as Deputy CEO until the end of April, and he will personally respond to the matter of leaving Hong Kong later. Chung Kim-wah said on the program Precious Dialogues that after the end of his contract with HKPORI at the end of April, he will serve as the Honorary Director of HKPORI as a volunteer and continue to assist HKPORI.

Chung Kim-wah is also an active commentator on current affairs, writing columns in various media and often appearing on current affairs programs. However, freedom of speech in Hong Kong has been suppressed, and media people have been arrested. Allan Au, a senior media person and a professional consultant at the School of Journalism and Communication of CUHK (Chinese University of Hong Kong), was arrested by the police on April 11 on suspicion of “conspiracy to publish seditious publications.” Chung Kim-wah said in an earlier interview with the program Precious Dialogues that Allan Au is a moderate person, and he does not participate in any political parties. If even he was arrested, then no one in Hong Kong will be safe.

After Hong Kong’s National Security Law landed, scholars who study social issues have left Hong Kong or been silenced one after another, especially after the arrests of Apple Daily and Position News employees last year, which had a chilling effect. Chan Kin-man, one of the founders of the Occupy Central and a former associate professor of the Department of Sociology at CUHK, went to teach at the National Chengchi University in Taiwan in July last year. In December 2021  Leung Kai-chi, a former visiting lecturer at the School of Journalism and Communication at CUHK, also went to National Taiwan University as a visiting scholar. Ma Ngok, associate professor of the Department of Politics and Administration at CUHK, and Choy Chi-keung, senior lecturer, also announced in December last year that they would withdraw from election research and current affairs commentary.

The Hong Kong Chief Executive election will be held on May 8. The only candidate, Lee Ka-chiu, a former police officer, said that after taking office, he will implement National Security for legislation under Article 23 of the Basic Law, causing citizens to worry that Hong Kong’s free space will continue to be compressed. Chung Kim-wah said during the Precious Dialogues program interview earlier, that if the Chinese Communist Party (CCP) chooses Lee Ka-chiu as the Chief Executive, the CCP’s policies toward Hong Kong will continue to focus on political suppression in the next few years.