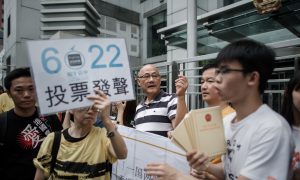 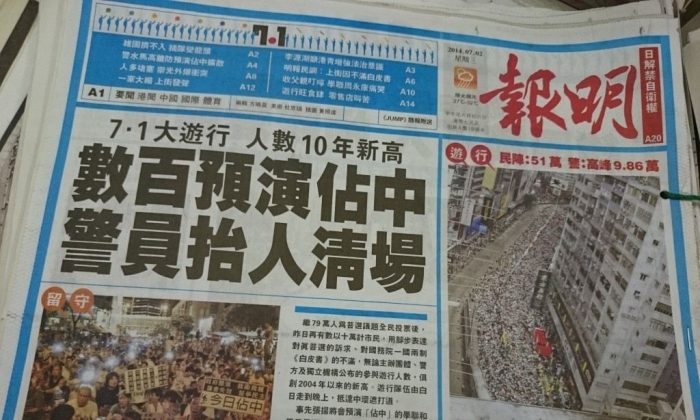 HONG KONG—Both censored and uncensored copies of the Ming Pao newspaper circulated in Hong Kong on July 2 after the editorial director altered the front page headline during printing.

The headline was about the annual July 1 parade, which had over 510,000 participants this year marching for universal suffrage in Hong Kong. According to the Ming Pao Staff Association, editorial director Lui Ka-ming ordered the printing process to stop at 3:30am on July 2 without authorization.

However, he did not remove the copies that were printed before the change, which meant two versions of Ming Pao with different headlines were published that day.

The Ming Pao Staff Association released a statement that evening condemning Lui’s alteration and mentioning that the editorial department was not aware of the changes. The Staff Association believes Lui’s unusual actions have caused dissatisfaction and anger, as people suspect he was trying to dilute politically sensitive topics.

The Staff Association stated that the alteration “has opened up a dangerous path for others to follow.”

The event has evoked major concerns from the media industry over Hong Kong’s waning freedom of press. The Hong Kong Journalists Association (HKJA) and the Independent Commentators Association (ICA) have issued statements expressing their condemnation of the event.

The ICA stated that Lui’s actions seriously deviated from normal publishing and editing procedures, and he is suspected to have overstepped and abused his powers. The statement added that Lui may have received instructions from elsewhere to downplay the reports on the July 1 parade as a form of political censorship.

Earlier this year, Ming Pao’s chief editor Kevin Lau Chun-to was suddenly removed from his post and later assaulted in public. Hong Kong people are concerned that this and other attacks on media figures is due to the Chinese Communist Party (CCP) interfering in Hong Kong’s press freedom.

Sources have reported that the CCP uses overseas businessmen with good reputations to acquire media companies. The CCP supplies the funds to purchase the companies and then uses the businessmen’s names to cover up the CCP’s involvement.

These media outlets usually maintain a neutral stance on the CCP or even deliberately criticize it, which hides the fact that the CCP is controlling them behind the scenes. In critical or sensitive moments, however, the media speak for the CCP and help it spread false news.

Ming Pao founder Tiong Hiew King is commonly believed in Hong Kong to be allied with former CCP leader Jiang Zemin. Tiong also joined many other media figures singing songs to praise the CCP as part of a musical campaign in 2011 by then-CCP official Bo Xilai, a key member of the Jiang faction.

Editorial director Lui Ka-ming is widely regarded as Tiong’s confidant, and some sources have stated that Lui was sent by former CCP head Jiang Zemin to act as a watchdog over Ming Pao in Hong Kong and be responsible for its content.

According to sources, Ming Pao’s sudden headline change was meant to intimidate the Hong Kong people, but the action only served to weaken Ming Pao’s credibility.