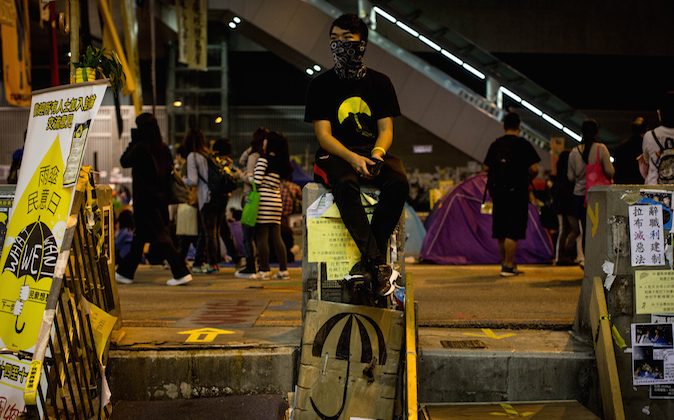 A pro-democracy activists sits between a set of makeshift stairs on the street outside Hong Kong's Government complex on November 16, 2014 in Hong Kong. (Chris McGrath/Getty Images)
China

A netizen is rallying supporters for an act of violence at the Admiralty occupation site.

Going by the moniker “Rather Too Naive,” the poster first harshly criticized the Hong Kong Federation of Students, a prominent student group in the Occupy movement, for not sending representatives to testify at a U.S. Congressional hearing on the future of democracy in Hong Kong. Former Hong Kong Governor Chris Patten, Associate Professor Victoria Tin-bor Hui, Ambassador Mark P. Lagon and Richard C. Bush III gave testimony at the hearing on Thursday.

After the tirade, “Rather Too Naive” declares that the Admiralty main stage, a raised make-shift platform where student leaders from the HKFS and Scholarism, as well as various pro-democracy supporters frequently make speeches, should be torn down, and the Occupy marshals guarding it be driven away.

In concluding, “Rather Too Naive” proposes that a new main stage be built, with new marshals that allow anyone to go up and speak freely on any topic.

“Rather Too Naive’s” proposal is likely related to a dispute on Tuesday night. According to Hong Kong publication Ming Pao, masked protesters showed up at the main stage and demanded to speak. Occupy marshals requested that they remove their masks and state their intent before going up. When the masked protesters refused, the marshals turned them away. After that, the protesters became aggressive and started to dismantle a barricade at the main stage, but quickly retreated after realizing that the media was training their cameras on them.

This is not the first time netizens have used HKGolden to organize Occupy movement activitites.

A campaign mocking the anti-Occupy movement’s petition to end the demonstrations was planned on HKGolden in October. This week, a misleading post claimed that the Hong Kong legislature was tabling a controversial bill that would curb online freedom, and that protesters should storm the Legislative Council building. Masked protesters gathered at the LegCo premises on Wednesday morning, and a handful of them smashed the building’s glass door before running away. Police were called in to subdue the remaining protesters, and four protesters were arrested.

Pro-democracy groups and the Hong Kong government condemned the incident, and a number of pan-democratic legislators insisted that the culprits are not representative of the Occupy movement. Student leaders, however, have only criticized the attackers for lacking responsibility by running away after the break-in, and say that the government should be held accountable for the incident.

Should the netizen successfully rally a sizable group of supporters to dismantle the main protest stage, it would be the surest sign yet that there is a definite splintering in the Occupy movement. Already, there are radical groups of protesters calling for action to secure the movement’s goal of true universal suffrage in Hong Kong elections.

“If people don’t rush out to occupy places, what is there to defend? Why don’t they just go home and defend their homes and pitch a tent there,” said Wong Yeung-tat, leader of Civic Passion, to a crowd at the Mong Kok protest site.

Wong adds: “Do we have to wait for [Chinese regime leader] Xi Jinping to implement political reforms?”

Although the prominent Federation of Students group continues to preach nonviolence and is content with holding on to the present occupation sites in Admiralty, Mong Kok and Causeway Bay, their leaders gained no concessions in a dialogue with the Hong Kong government, and have failed to enter mainland China to directly petition Chinese officials in Beijing.

With nothing to show for after more than fifty days in the streets, it remains to be seen if the HKFS and Scholarism leader Joshua Wong can continue to influence a leaderless movement that is fast losing patience.