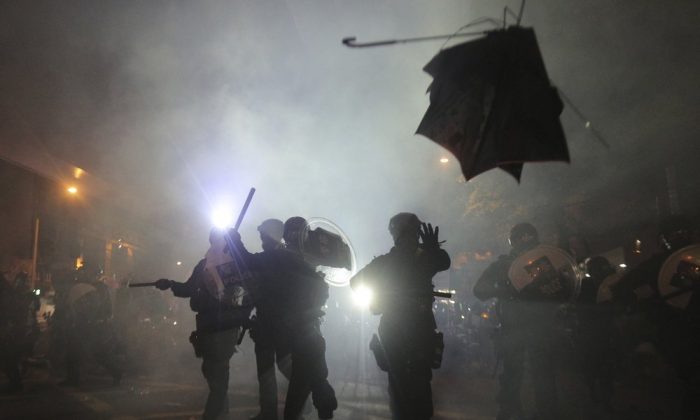 A broken umbrella flies by near riot police, during confrontation with protesters in Hong Kong on July 21, 2019. (Andy Lo/HK01 via AP)
China Human Rights

A group of masked men, all in white T-shirts, stormed the Yuen Long MTR station at about 11 p.m. on July 21, and attacked protesters who returned from the march against the extradition bill. Most protestors dressed in black or grey. The attacks occurred on both platforms and inside the train cars. Lam Cheuk-ting, legislative council member and a member of the Democratic Party, was hospitalized. Reporters, including a female reporter from the Stand News, were injured.

According to the Radio Television Hong Kong, at least 36 were injured and one was in critical condition. BBC reported 45 injuries. The police arrived on site 30 minutes after the attacks.

March organizer Civil Human Rights Front (CHRF) issued a statement to express its anger toward the police neglecting their duty and allowing thugs to attack a Stand News reporter and ordinary citizens. The police unnecessarily used tear gas on protestors but turned a blind eye when real thugs were beating pedestrians, reporters, and legislators.

To Ka Lun, legislative council member from the Fairview Park district of Yuen Long, said that Yuen Long residents received the reply of “if you are scared, don’t go out” when they called the police. The Stand News interviewed a woman who called the police at Yuen Long station. She said that after she briefly introduced the situation and the attacks, the other side simply said “I know” and hung up on her. Online video clips also showed police turning around and leaving a site where the white T-shirt mobs were beating residents.

Zachary Wong Wai-yin, legislative council member representing Yuen Long, said he was “very very angry.” According to him, residents complained since 7 p.m. about over 100 white T-shirt people gathering. For the next three hours, no police came. He said that his sources revealed that the white T-shirt gang came from Yuen Long and Tuen Mun.

Legislators from the Democratic Party issued a statement, condemning the police’s dereliction of duty by allowing Yuen Long to become a stage for the mafia. They suspect collaboration between the police and mafia thugs and demand an immediate meeting with Hong Kong Chief Executive Carrie Lam.

Chinese Communist Party in the Shadow

Junius Ho Kwan-yiu, a pro-Beijing legislative council member from the district of Tuen Mun, was spotted shaking hands with these white T-shirt gangs, giving them a thumbs-up and calling them “you are my heroes” as one of the white T-shirt men told Ho “you are my idol.”

The Hong Kong administration issued a statement “condemning violence.” Hong Kong police called the white T-shirt thugs “some people” in its statement “some people attacked commuters at the platforms of the Yuen Long MTR station and train compartments, resulting in multiple injuries.”

Alan Leong Kah-kit, a seasoned lawyer and former member of the Hong Kong Legislative Council, stated, “I’m furious and sad. Hong Kong will absolutely not allow Carrie Lam Cheng Yuet-ngor to use ruffians to do illegal things that the police do not dare and would not like to do, in order to threaten the Hong Kongers who exercise their rights of peaceful marches and protests! Do not think that a statement condemning the white T-shirt gangs will get you by. Junius Ho Kwan-yiu openly colludes and endorses such evil forces. He will be abandoned by Hong Kong!”

A Hong Kong resident told the Epoch Times, “Yuen Long mafia openly attack citizens in the train. We have heard about the rumor that wearing white T-shirts would guarantee safety yesterday. Tonight the white T-shirt thugs are walking all over the street. There was no response to residents’ and legislators’ calls to police. Yuen Long police must know about this. They are partnering with the mafia to threaten Hong Kongers. We have reasons to suspect: is the police chief who used to be Yuen Long director actually the mastermind?”