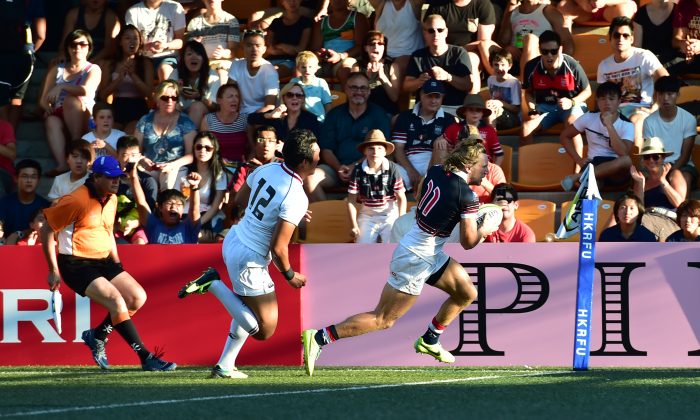 Adjudged Best and Fairest Men’s player of the tournament, Hong Kong Winger, Tom McQueen runs in a try to the corner during his team’s 40-0 win against Korea in the Final of the RS Hong Kong Sevens at Hong Kong Football Club on Sunday Aug 24, 2104. (Bill Cox/Epoch Times)
Hong Kong

The RS Hong Kong Asian Sevens tournament was played at the Hong Kong Football Club on Aug 23 and 24 with 12 men’s teams and 8 women’s teams taking part. This was the first round of a 3-round series (two for women). The second round for men’s teams takes place in Kuala Lumpur, Malaysia on Sept 6-7 and the third round will be in Shanghai, China on Oct 18-19.

Men
Hong Kong won the first leg of ARFU Asia Sevens Series in convincing style, winning both of their matches in Pool-D, they followed up with a win in the Quarter Final encounter against Singapore 38-0 and knocked out Sri Lanka 21-0 in the Semi-final to book their place in the Final. In the Pool matches Hong Kong beat Kazakhstan 38-5 and Philippines 24-0.

Japan, the expected top rivals for the Cup were not quite on-song. They did top Pool-A, won their Quarter Final match against China (19-7), but lost the Semi-final to arch rivals Korea 21-28. Japan fought back strongly towards the end of the second half but time was against them. Japan won the 3-4 play off against Sri Lanka (42-12).

The men’s series now moves on to Kuala Lumpur for the second round of the series on Sept 6 and 7.

Women
China trounced Hong Kong 38-7 in the Final of the women’s ARFU RS Asian Sevens at Hong Kong Football Club on Sunday Aug 24. Hong Kong played well up to that point beating Philippines (22-0), tied with Thailand (12-12), but lost to China 31-12 in Pool-X. Hong Kong won a close Semi-final against Japan 10-5 to move to the Final.

The China team looked the part; tall, fast, athletic and well organised took the final by storm, stamping their authority on the sport in Asia. China won all of their Pool matches comfortably and went on to beat Kazakhstan 19-12 in the Semi-final. Hong Kong could not match the speed or power of the Chinese in either the Pool match or the Final.

After finishing in 9th place in the tournament last year China appears to have put matters right and to be emerging as a dominant force in the Asian Women’s Rugby Sevens arena.

The second round of the series in Malaysia does not include women’s sevens, instead the top teams will be concentrating on the IRB Women’s World Sevens Series Qualifier.

Four of these teams (all Semi-finalists) will qualify for the 6-round IRB World Series starting in Dubai on Dec 4 and 5. The Qualifiers will join New Zealand, Russia, Australia, England, Spain, USA and Canada plus one more team still to be invited.

Asian Games
Pool’s for the Rugby Sevens in the Asian Games at Incheon, South Korea are: