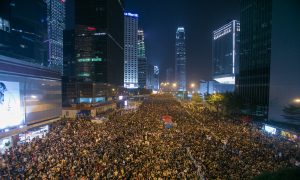 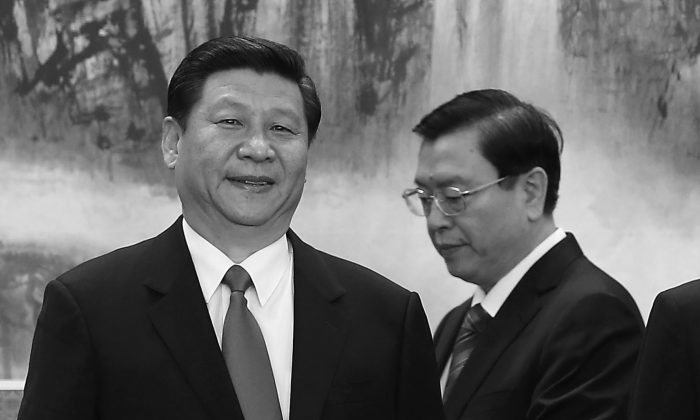 Politburo Standing Committee member Zhang Dejiang stands behind Xi Jinping, just after he was formally appointed to head the Chinese Communist Party, in the Great Hall of the People on Nov. 15, 2012 in Beijing. Hong Kong magazines have reported that Zhang was part of a plot to create chaos in Hong Kong in order to bring trouble to Xi. (Lintao Zhang/Getty Images)
China

Hong Kong media are reporting that one faction of the Chinese Communist Party (CCP) has attempted to manipulate recent events in order to produce a Tiananmen Square-like massacre in Hong Kong. The goal of the bloodshed would be to bring down Party leader Xi Jinping, according to the reports, which corroborate previous reporting by Epoch Times.

The recently released November edition of Hong Kong’s Frontline magazine cited a Beijing source with inside knowledge of the CCP’s affairs as saying Politburo Standing Committee member Zhang Dejiang wanted to turn the suppression of pro-democracy protesters by Hong Kong police on Sept. 28 into a second Tiananmen Square massacre. The Frontline article, which is not available online, was quoted by the U.S.-based, Chinese-language news website Aboluowang.

Zhang is the chair of the Standing Committee of the CCP’s rubber stamp legislature, the National People’s Congress, and holds the Party’s portfolio for Hong Kong and Macau affairs. Zhang is also a close ally of former CCP head Jiang Zemin.

According to the Beijing source, the faction loyal to Jiang Zemin believed that if a massacre in Hong Kong took place under the spotlight of the world’s media, it would spell the end of Xi Jinping’s rule.

As Epoch Times has previously reported, Jiang’s faction has sought to displace Xi since before he took office. Part of the Jiang faction’s strategy has been to create unrest in Hong Kong as a way of making trouble for Xi, as Epoch Times, relying on sources inside the Party, first reported on Dec. 3, 2012.

Again relying on sources inside the Party, Epoch Times reported in 2014 before the Occupy Central protests began that Jiang’s faction sought to incite bloodshed in Hong Kong as a way of unseating Xi.

After the Hong Kong police volleyed dozens of tear gas canisters at the protesters on the night of Sept. 28, Xi issued orders prohibiting a violent crackdown, Frontline reported.

The leaked order from Xi to the Hong Kong government says: “It’s absolutely not allowed to open fire. Wasn’t the lesson of June 4 deep enough? Whoever permits shooting steps down! Even tear gas wasn’t necessary. Let it be, if it was already done. If people are not scared away, just leave. The condition has deteriorated to this point, and it’s your job to figure out how to solve the problem. Overall, never allow bloodshed. Try to win public support. Hong Kong affairs must be negotiated with the Hong Kong people.”

Senior political commentator, column writer, and historian of the CCP Lin Baohua published an opinion article on Taiwan People News on Oct. 25 that argued that the central authorities didn’t want a bloody incident in Hong Kong.

Lin said the lack of firm action against Occupy Central reflects the division of opinions high in the CCP.