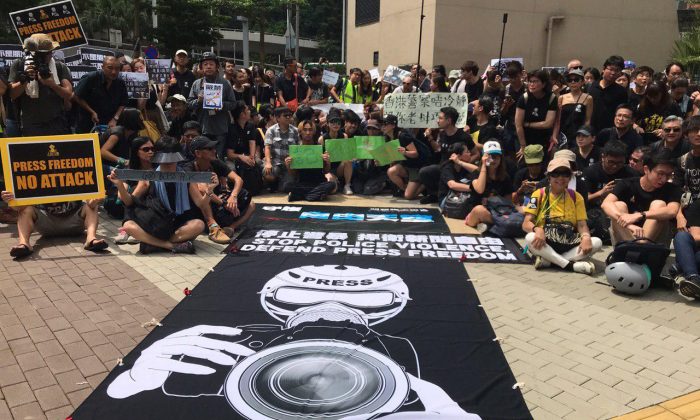 Seven media groups took to the streets in Hong Kong on July 14 to protest police violence against journalists during their recent reporting on millions of people pushing back against a controversial government extradition bill.

The demonstration was called the “Stop Police Violence, Defend Press Freedom” silent march. Participants, mostly dressed in black with some donning reflective vests, gathered at Harcourt Garden in Admiralty before marching off at around 11 a.m. local time towards the police headquarters building and then the Office of the Chief Executive, also in Admiralty.

Outside the Police Headquarters, Chris Yeung, chairperson of HKJA, handed a petition letter on behalf of the seven groups to a superintendent of the Hong Kong Police Force. However, upon arrival at the Office of the Chief Executive, no one was there to receive the petition letter. Hong Kong media reported that the protesters had to stick the letter on a plastic water-filled barrier that was blocking access to the office.

“During the recent series of protests, journalists were unjustifiably dispersed, pushed away, verbally insulted, or even beaten by batons, shot by bean bag rounds by police officers in a number of occasions [sic],” the protesters read in a joint statement outside of the Office of the Chief Executive.

The protesters added: “The Hong Kong Journalists Association has received a total of 29 cases of complaints by journalists against police officers for alleged excessive use of force and obstruction of their reporting.”

The association has since filed a complaint for 27 of the 29 cases to the Independent Police Complaints Council (IPCC), the city police’s internal watchdog.

Referring to a march in Kowloon district on July 7, protesters said that journalists had been “pushed away by a team of police officers armed with batons without justifiable reasons.”

Police’s action during a June 13 rally in Sheung Shui, a town that is just a short distance from the southern Chinese megacity of Shenzhen, was also under scrutiny. Following that rally, HKJA and HKPPA issued a statement reporting several incidences of police’s violence, including when a reporter was hit by a police officer wielding a shield two to three times.

“Time and again, journalists have been struggling to keep themselves safe. The irony is that the major source of threat came from the law-enforcing police officers on the spot. How can the media fully serve the role of the fourth estate, especially in monitoring the exercise of public powers?” protesters asked, according to the statement.

They then demanded that Hong Kong leader Carrie Lam and the senior management of the Hong Kong Police “launch an inquiry conducted by independent figures with credibility.”

One of the participants in the silent march was Tom Grundy, editor-in-chief and co-founder of Hong Kong Free Press. Speaking to Hong Kong media The Stand News, Grundy said he came out to show solidarity because he has concerns about the safety of his people reporting on the frontline, citing what he saw as a lack of discipline among the police.

Another participant of the march, Bruce Lui, convener for the Independent Commentators Association, told the Hong Kong bureau of The Epoch Times that because journalists are on the sidelines of such clashes, the local police and government should ensure their safety.

The Hong Kong government first proposed the controversial extradition bill in February. If passed, the legislation would allow the chief executive—Hong Kong’s top leader— to sign off on extradition requests, including from mainland China, without approval from the city’s legislature.

Many Hongkongers are worried that if such a bill were to pass, Beijing could potentially pressure the city government to hand over citizens of any nationality to face trial in the Chinese regime’s courts under false pretenses.

Four unidentified men, each wearing a facial mask, broke into its office at around 2:30 a.m. on July 1, according to The Stand News. A staff member who was in the office at the time was threatened by the four men. One wielding a hammer, another holding a softball bat, and a third holding a pipe, smashed the office’s glass doors and tables.

The incident took place prior to the July 1 march that drew over half a million people.

“This mob-like attack sends a chilling message to all media groups that cover the demonstrations,” said Cédric Alviani, East Asia Bureau Director of Reporters Without Borders, according to a July 11 online statement.

Alviani urged the Hong Kong authorities to “identify and punish the instigators of this violent act.”