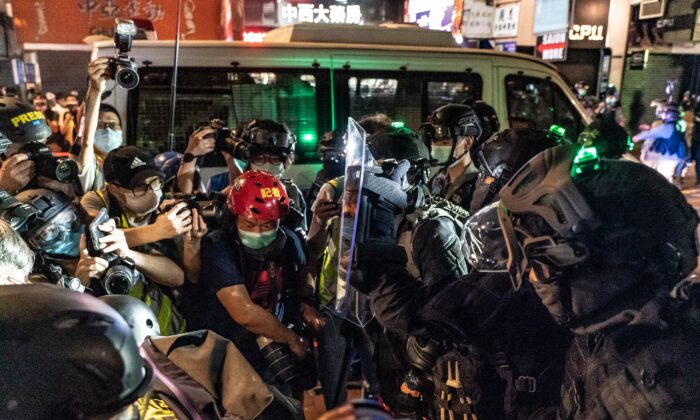 Riot police hold back members of the media during a demonstration in Mongkok district in Hong Kong, on May 10, 2020. (Anthony Kwan/Getty Images)
HK Current Affairs

“The case of the arrest of Ms. Choy has already created a chilling effect on the media. Journalists fear they may be jailed for merely doing their work of investigative journalism,” they wrote in the joint letter, which was co-signed by the Hong Kong Journalists Association (HKJA), Hong Kong Press Photographers Association, RTHK Programme Staff Union, and others.

Choy Yuk-ling, also known as Bao Choy, was one of the producers behind a documentary that aired on public broadcaster RTHK examining the police’s slow response to a mob attack on commuters at the Yuen Long metro station on July 21 last year. She was accused of making false statements to obtain vehicle records, which were used in her investigation to expose connections between the attackers and local community leaders.

Choy was arrested on Nov. 3 and subsequently released on bail. She made her initial court appearance on Nov. 10 and is scheduled to appear in court again on Jan. 14, 2021.

Finding the truth is not a crime. We have to uphold our journalistic principles, remain unflinching, fearless and impartial. I know I will never walk alone. #PressFreedom #BaoChoy pic.twitter.com/JDaYPYqnCS

The groups pointed out that different Hong Kong government departments, including the Transport Department and Immigration Department, have imposed more restrictions on information searches in recent years, in the name of preventing data misuse.

“The Government should not set up roadblocks for reporters in doing searches for information,” the groups stated.

Citing Hong Kong’s Personal Data Ordinance, the groups argued that the “use of personal data for news activity” shouldn’t be subject to restrictions when media activities are considered to be in the public interest.

Aside from seeking a meeting with Lam, the groups put forth three demands, including that the Hong Kong government uphold press freedoms, and government departments open up information searches to journalists.

The groups also asked for charges against Choy to be dropped.

“The prosecution of Bao Choy does not conform with public interest,” they said.

The open letter came just after the Hong Kong government rejected a request from the HKJA to hold a march on Nov. 15 to voice support for Choy.

Last week, HKJA filed an application to hold the march, to be attended only by HKJA members, journalists, and teachers and students from journalism departments. However, the police rejected the request on the grounds that holding the event could put people at increased risk of being infected with the CCP virus, commonly known as the novel coronavirus.

In response to Cheung’s decision, HKJA expressed “extreme disappointment” in a statement issued on Nov. 14. The association said it would “find other channels to provide support and speak up for Choy Yuk-ling and the [media] industry.”