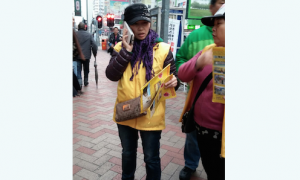 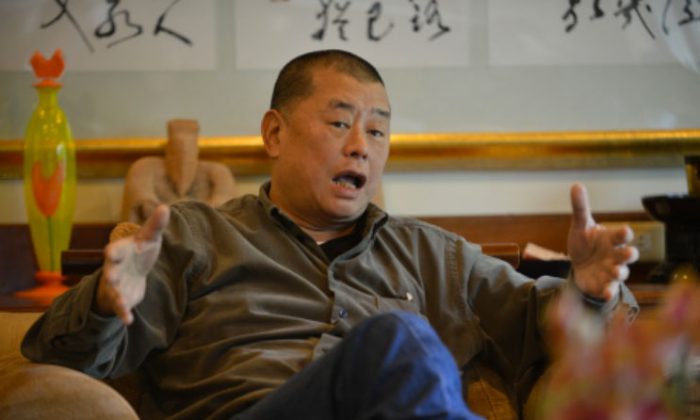 Jimmy Lai, a Hong Kong media tycoon and founder of Next Media. Lai's house in Hong Kong was searched by the Independent Commission Against Corruption on Aug. 28, 2014. (Screenshot/Apple Daily)
China

A high-profile media proprietor in Hong Kong, who runs a newspaper that regularly takes on the Chinese Communist Party, had his house raided by anticorruption investigators on Aug. 28, raising concerns in the city-state that politics are beginning to encroach on Hong Kong’s well-known independence.

The home of media tycoon Jimmy Lai, in the Kowloon district of Hong Kong, was searched by agents with the Independent Commission Against Corruption from 7 a.m. to 11 a.m.

At around 8 a.m. agents also raided the house of the Labor Party leader, Lee Cheuk-yan, who is also a member of the Legislative Council of Hong Kong, the sole legislature.

Lai and Lee are both part of a loose, de facto coalition of civil society, political, and business figures in Hong Kong that are attempting to bolster the autonomy and independence of the city-state from further influence and control by the People’s Republic of China, which it borders and of which it is a Special Administrative Region.

When Hong Kong was handed back to China in 1997 by the British, it was on the condition that the city-state’s basic system would not change for 50 years, and that Hong Kong would maintain autonomy under the Basic Law, effectively Hong Kong’s constitution.

In recent years that contract has come under stress, with Beijing seeking to extend its control over Hong Kong, and local actors seeking to allow Hong Kong residents to select their own candidates for election to the position of chief executive—a process that Beijing now controls.

Lee, the Labor Party leader, has in the past made a range of statements supporting press freedom and independence in Hong Kong.

He told Apple Daily that his impression after the raid was that ICAC investigators suspected that Jimmy Lai’s donations to the Labor Party influenced Lee’s public statements.

But he expressed confusion at this claim, given that the Labor Party has always supported press freedoms.

An executive at Next Media, Jimmy Lai’s media holding company, said in an interview with Apple Daily, one of the newspapers it runs, that the raid by ICAC was no doubt due to Lai’s support for Occupy Central, a civil society and democracy movement in Hong Kong which is fighting for universal suffrage.

“[The investigation] is right before Occupy Central. It’s white terror!” the executive said. “Their true purpose is to threaten people not to take to the streets,” he or she said, according to Apple Daily.

In the afternoon of Aug. 28, after the raids, the ICAC said that they had received reports accusing legislative councilors of taking bribes, and that they were investigating four related parties.

The Commission earned a reputation as a bastion of clean government and due process through the 1980s and 1990s, though that sheen has begun to wear in recent years, as former Commission chiefs have been embroiled in scandals related to China.

Prior to 1997 the Commission reported directly to the Governor of Hong Kong, and played a critical role in cleaning up the police forces from its formation in 1974. After the handover in 1997, the Commissioner was appointed by the State Council of the People’s Republic of China.

The investigation of Lai is taking place as the clock ticks on the Occupy Central movement’s civil disobedience actions. Activists propose to fill Hong Kong’s financial district with peaceful protests, perhaps beginning in late September, according to Apple Daily.

At around this time, too, the Standing Committee of the National People’s Congress in China is meeting—one of the topics it will address is the 2017 Hong Kong election, and how much autonomy the Chinese Communist Party is willing to give Hong Kong.

Signs so far do not point to an accommodating posture.

Beijing is well known for its swarms of computer hackers, and their ability to penetrate fortified military and defense contractor security systems.

Jimmy Lai, too, appears to have been hacked recently, with 900 of his emails leaked by an alleged “whistle blower” to pro-Chinese media in Hong Kong.

Those media agencies published the emails, which caused Lai embarrassment, as he and top managers discussed shortfalls in advertising revenue to Next Media as a result of banks pulling ads. Three Chinese banks and some major Hong Kong banks began boycotting Next Media at the end of last year, and the beginning of this year—a move that hit Next Media’s bottom line hard.

Some of the emails also suggested that Lai had donated millions of Hong Kong dollars to democratic politicians—which is perfectly legal in Hong Kong, but which many in Hong Kong suspect may have been part of the trigger for ICAC’s investigations.

Apple Daily has been victim of cyberattacks before, including in late June, just days before a July 1 march calling for universal suffrage. An opinion poll run by a university that attempted to measure popular support for Occupy was also brought down by massive computer attacks.

Most recently in July, House News, a recently-launched popular and independent online news platform with a pro-democracy bent, was abruptly shut down. Its founder, Tony Tsoi, cited growing political pressure, more than he could bear.