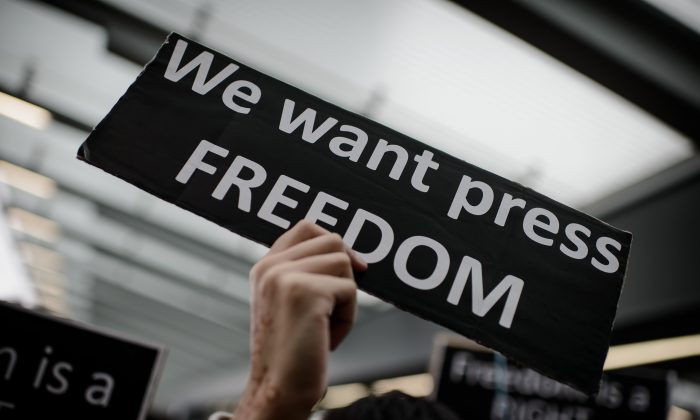 Less than a month after a furious attack against the former chief editor of the Ming Pao newspaper in Hong Kong, another two senior figures at a Hong Kong media agency have been assaulted, according to reports.

Two executives at the Hong Kong Morning News were attacked in the street by four men armed with metal bars in the Tsim Sha Tsui area of Hong Kong at around 1 p.m., according to an announcement by the newspaper three hours after the incident.

The announcement said that four attackers all wore caps, masks, and work gloves, and fled in a car. The police are still searching for the suspects, and the motivation for the attack is not clear yet.

The two executives, a man and a woman, did not sustain life-threatening injuries. They escaped with injuries to their hands, feet, and arms, and were able to answer questions (while seated in wheelchairs) at the Queen Elizabeth Hospital in Hong Kong, where they were sent after the attack.

The Hong Kong Morning News strongly condemned the bashing, saying that the paper is neither scared of, nor willing to tolerate, such lawless brutality.

The newspaper also said it will keep publishing.

The latest attack is the second violent attack to Hong Kong media persons within a month. On Feb. 26, former chief editor Kevin Lau was slashed and stabbed six times in the back and across the legs, which brought noisy protests in Hong Kong.

Many activists and media figures in Hong Kong draw a straight line from the recent violence to the Chinese Communist Party, or officials in the regime, who wish to restrict press freedom in Hong Kong by intimidating media there.

Hong Kong police said they have arrested 11 people involved in Lau’s attack, 2 of whom they said have gangland backgrounds. The police said they were hired to do the attack, but they do not know who did the hiring.