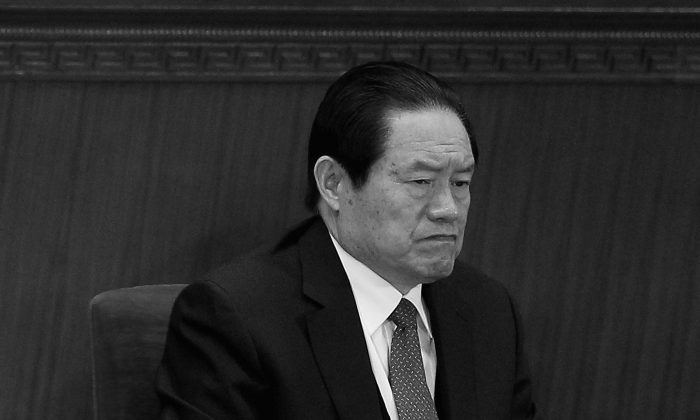 Zhou Yongkang is said to have pleaded for his life and reported on his allies after confessing crimes for which he could be sentenced to death, according to Hong Kong and overseas Chinese news media.

The former Politburo member and head of the Chinese regime’s security apparatus was officially investigated in August 2014 for “grave violations of discipline”—a Party term synonymous with corruption—and charged with bribery, abuse of power, and leaking state secrets early April.

While in detention, Zhou reportedly refused to sign the detention documents, claimed he was “being persecuted,” went on a hunger strike, faked a suicide attempt, and acted insane, according to Hong Kong publication The Trend.

The ex-security czar eventually caved under interrogation and started talking—22 testimonies were yielded in 27 trial sessions that spanned 112 hours between January and March this year. Zhou’s misdeeds warrant the death sentence, according to The Trend.

The three have a shared history, having been key players in the campaign to persecute the Falun Gong spiritual discipline, a massive security mobilization that began in 1999, and led to mass torture and, researchers estimate, tens of thousands of deaths through organ harvesting.

While Jiang stepped down as the Party chief in 2002, for the following decade he played a godfather role in the Chinese regime, controlling an extensive political faction that current Chinese leader Xi Jinping is rooting out with his anti-corruption campaign.

There are signs that Zhou might reveal information on his political allies. Zhou reportedly went on his knees before the top investigation officer to plead for his life on seven occasions, according to The Trend. Another Hong Kong publication, Frontline, claims that Zhou had already divulged information on Zeng Qinghong.

If Zhou settles on self-preservation, then Xi Jinping will likely have the evidence required to take down the two biggest “tigers”—Party parlance for high-ranking corrupt officials—enroute to consolidating power for himself.