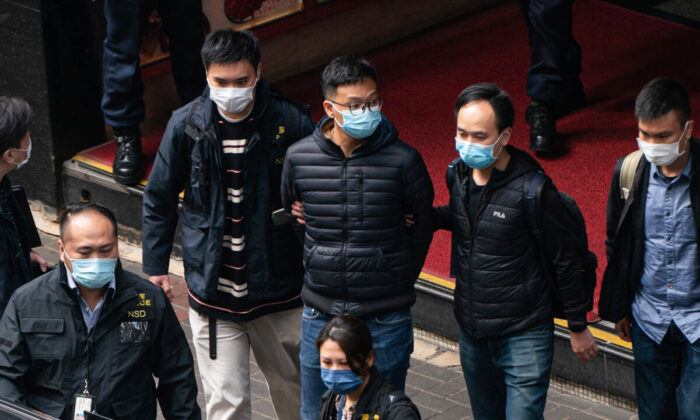 Stand News, a nonprofit set up in 2014, became the second Hong Kong media outlet to be raided in 2021 after 500 police officers raided local newspaper Apple Daily’s headquarters and arrested five of its directors in June. Both media outlets are known for publishing voices supportive of Hong Kong protesters.

The raid against Stand News’ office in the city’s Kwun Tong District ended at roughly noon local time, with the police seizing about 30 boxes of evidence, as well as several computers.

Following the raid, Stand News announced on its Facebook page that it will stop operating immediately, including the updating of all of its social media accounts. It added that all of its employees have been terminated and that its acting editor-in-chief, Patrick Lam, has resigned.

Lam was one of the seven people arrested, according to Hong Kong media.

Steve Li Kwai-wah, senior superintendent of Hong Kong’s Police National Security Department, said during a press briefing following the raid that the seven arrests included three men and four women without identifying their names. He said they were arrested for “conspiracy to publish seditious materials,” in violation of the city’s colonial-era Crimes Ordinance.

He said the media outlet published many “seditious” articles between July 2020 and November. Beijing’s draconian national security law went into effect on July 1, 2020.

Hong Kong pop singer and activist Denise Ho, a household name in Hong Kong, was among those arrested, according to her Facebook page. She was a former board member at Stand News.

Ho was an active participant in both the 2014 Umbrella Movement and the anti-Chinese Communist Party (CCP), pro-democracy protest movement of 2019 and 2020.

Ho’s arrest drew the concern of the New York-based nonprofit Human Rights Foundation (HRF), saying that it was “outrageous” that she was placed in custody and that it was another sign that the Hong Kong government is “a puppet” of the CCP.

The CCP and the Hong Kong government “have complete disregard for press freedom and are shameless in brazenly attempting to remove all of Hong Kong’s freedom advocates from public sight through high-profile arrests,” Thor Halvorssen, HRF chief executive officer, said in a statement.

Aside from Ho, three other former board members of Stand News were arrested: Margaret Ng, Chow Tat-chi, and Christine Fong, according to Hong Kong media. Ng was also a former pro-democracy legislator in Hong Kong.

Several rights groups condemned the raid on the morning of Dec. 29, after the Hong Kong government first announced that it had arrested six individuals in an operation against Stand News.

The Foreign Correspondents’ Club in Hong Kong (FCCHK) said in a statement that the raid and arrests “are a further blow to press freedom in Hong Kong and will continue to chill the media environment in the city following a difficult year for the city’s news outlets.”

In a survey published in November, the FCCHK found that 61 percent of those polled said they were slightly concerned and 10 percent said they were very concerned about the “possibility of arrest or persecution from reporting or writing opinion articles.”

One unnamed respondent to the survey said Hong Kong’s journalistic environment “has become worse than the mainland because nobody knows what the red lines are.”

Steven Butler, Asian program coordinator at the New York-based Committee to Protect Journalists, said the arrests amount to “an open assault on Hong Kong’s already tattered press freedom,” according to a statement.

Brian Leung, executive director at the Washington-based Hong Kong Democracy Council, expressed concern about whether those arrested would receive a fair trial, according to a statement.

“By branding the exercise of press freedom as sedition, Beijing is making clear that the regime doesn’t tolerate truth-telling in Hong Kong,” Leung said.