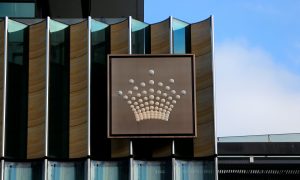 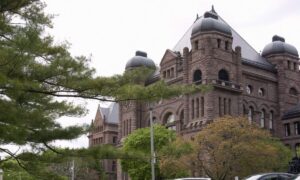 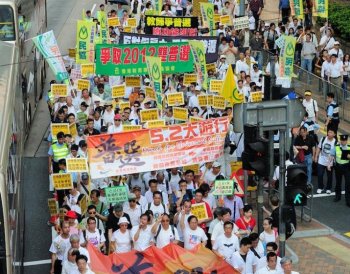 Over 1000 protesters marched for freedom in Hong Kong on Sunday, as public discontent is brewing over Mainland's restriction on democratic governance. (Win Hanlin/The Epoch Times)
China

By Sonya Bryskine
Print
Over 1,000 people marched for freedom in Hong Kong on Sunday, as public discontent is brewing over Mainland’s restriction on democratic governance.

Such protests have become an annual event since 2003, when in July over half a million people flooded the streets, urging a lift on the mainland communist Chinese regime's interference.

Hong Kong residents are demanding that they be allowed to elect their leaders democratically, rather than by a Beijing-backed committee.

The Sunday rally blasted a newly-proposed reform package from Beijing, which attempts to introduce limited electoral reform for the 2012 elections. The proposal sets to increase the selection committee for the region’s leader from 800 to 1,200 people, and add 10 members to the legislature.

While China has allowed the region to exist as an autonomous state after the 1997 take-over, democracy activists in Hong Kong say the system does not go nearly far enough.

"Real universal suffrage has to be genuinely universal and accessible to everyone. You have to cancel this system of reserving seats for interest groups," Audrey Eu, chairwoman of the opposition Civic Party, said on the sidelines of Sunday's protest to the Associated Press.

She and Democratic Party Chairman Albert Ho, who was also at the protest, said their parties planned to vote against the reform package.

According to the Beijing legislation Hong Kong cannot vote for its leader until 2017 at the earliest. The vote for the legislature will not be a reality until 2020.

However, election reform was not the only cause for protests on the weekend. Angry demonstrators picketed outside the city’s legislature in opposition to a project that will see hundreds of villagers evicted to make way for a $8.6 billion high-speed railway link.

The line will connect Hong Kong to the southern Chinese city of Guangzhou and is expected to bring HK$87 billion in economic benefits over the next 50 years.

Public outcry has erupted over the razing of village houses that stand in the way of the project, which will become the most expansive in the world on a per-mile basis.

Pro-democracy politicians are poised to resign en masse from the city's legislature this month in frustration at what they say is a too slow pace in political reforms.

"Hong Kong's role is changing, in that no longer are we a so-called economic city. Hong Kong is fully aware that to stand up for our rights is the only way to safeguard our future," Albert Lai, chairman of the Professional Commons, told Reuters.