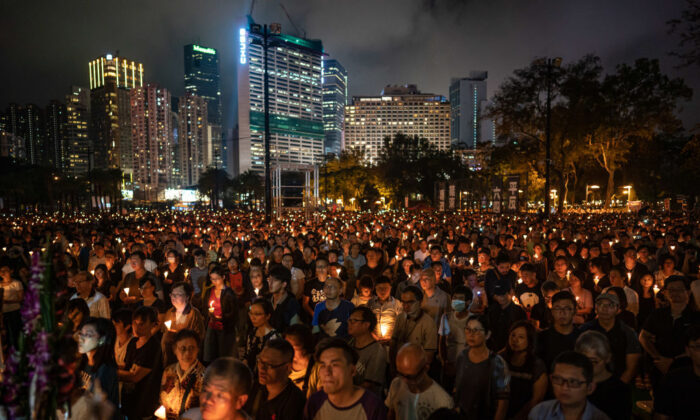 Both Hong Kong and Macao authorities have banned residents from participating in events in memory of the 1989 Tiananmen Square pro-democracy protests, days prior to June 4—a historic day when leaders of the Chinese Communist Party (CCP) ordered a massacre of anti-regime protesters.

On June 1, Hong Kong leader Carrie Lam emphasized during a press briefing that all agencies, groups, media outlets, and schools should conform to the Beijing-imposed National Security Law as June 4 approaches.

When asked if residents are allowed under the draconian law to shout any slogan like “End One-Party Rule,” Lam evaded the question. Instead, she responded that there should be no activities against China’s Constitution in Hong Kong.

At the same time, the city’s pro-Beijing authorities prohibited the Hong Kong Alliance in Support of Patriotic Democratic Movements of China from holding their annual candlelight vigil in Victoria Park on May 29, as well as blocking a demonstration to honor the 32nd anniversary of the June 4 incident.

Activist Alexandra Wong, a white-haired local senior citizen, was arrested by a large group of police officers on a charge of “unauthorized assembly” on May 31 as she showed up alone at Southorn Playground in Wan Chai—the starting point of the proposed parade route. She held protest signs and was planning to walk the banned route to the Liaison Office of the Central People’s Government—the CCP’s highest authority in the city. She was released after a night’s detention.

On the same day, John Shum, a social activist and film producer, called on fellow Hongkongers to show their stance in an interview with international studies scholar Simon Shen.

“We should be loyal to our conscience no matter what happens to Hong Kong or what pressure we may face,” Shum said. He suggested Hongkongers hold a candle by their window on the evening of June 4 as an expression of their thoughts.

“Conscience will never be conquered,” he added. “No state power can prevent me from commemorating the incident.”

Chen Qinghua, a former member of the Hong Kong Federation of Students (HKFS) and a witness of the June 4 massacre in Beijing, told The Epoch Times in an interview on May 28, “The balancing logic—the Westernized separation of powers among different institutions—has been completely destroyed in Hong Kong although it was treasured here in history.”

He also said that the student protests—either demonstrations or hunger strike—were all voluntary, and never incited by others, or as the regime claimed, “hostile foreign forces.” The protesters at the time still believed in the CCP, never attempting to confront it, Chen said.

He added that’s why protesters at the time believed it was absurd for the CCP to send military tanks into Tiananmen Square to enforce the crackdown.

With the implementation of Beijing’s National Security Law, the freedoms previously enjoyed by Hongkongers are being quickly eroded, critics said.

On May 6, 26 pro-democracy activists who participated in last year’s vigil were sentenced to four to 10 months in prison on the charge of “taking part in an unauthorized assembly.” They included dissidents Joshua Wong, Lester Shum, Tiffany Yuen Ka-wai, and Jannelle Rosalynne Leung.

In the former Portuguese colony of Macao, police for the first time designated any Tiananmen-related events to be “inciting subversion of state power” in a May 25 reply to the Macao Union for Democratic Development.

Au Kam San, a former member of the Legislative Assembly of Macao, told The Epoch Times on May 29 that police were now claiming that candlelight vigils in memory of the June 4 incident are against criminal law.

He argued that it is ridiculous to declare events that have been held for the past 30 years to be “illegal,” while the city’s criminal law developed in 1995 has remained unaltered.

Historically, Hong Kong and Macao residents have lent moral and financial support to the Tiananmen Square protesters during the campaigns for democracy in China.

On May 21, 1989, a day after the CCP purged General Secretary of the Communist Party Zhao Ziyang, who was sympathetic with protesters, and declared martial law in Beijing, an unprecedented march took place in the capital city, drawing more than 1 million people in support of the pro-democracy students in Beijing.

On the very afternoon of June 4, 1989, nearly 200,000 Macao residents—half of the then local population—took to the streets and launched a record demonstration against Beijing’s killing of civilians seeking democracy. Some burned images of Deng Xiaoping, Li Peng, and Yang Shangkun, who were primarily responsible for ordering the massacre.