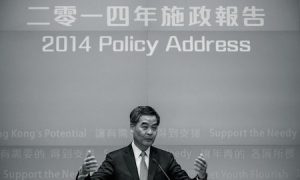 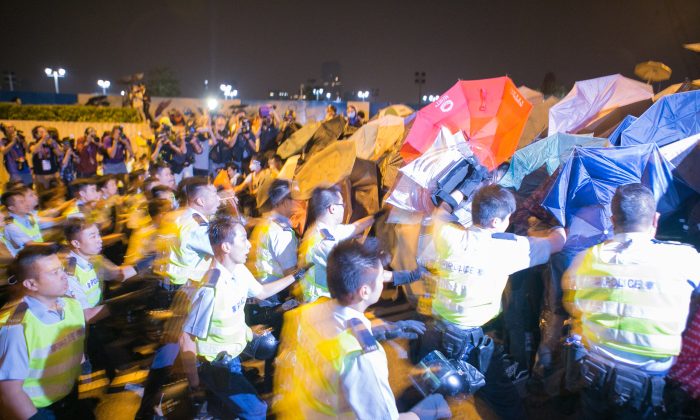 Police start to beat pro-democracy protesters after they successfully shutdown Lung Wo Road, one of the major roadways in Hong Kong, on Oct. 14, 2014. (Benjamin Chasteen/Epoch Times)
HK Buzz

Hong Kong fans of the English Premier League football side Liverpool are up in arms over the misuse of the club’s iconic song.

MAKE US DREAM, a Hong Kong Liverpool fan club, are lodging an official complaint against Tam Yiu-chung, the chairman of the pro-Beijing Democratic Alliance for the Betterment and Progress of Hong Kong (DAB) party, for singing “You’ll Never Walk Alone” in the Hong Kong Legislative Council as a tribute to the Hong Kong police.

In the complaint letter on their Facebook page, the Liverpool fans explore the history of the Richard Rodgers and Oscar Hammerstein song and the club’s tragic history.

The letter draws a comparison between how the South Yorkshire County police and the British government “distorted the facts” and blamed the tragedy on Liverpool fans, and the current “injustice” in Hong Kong.

Referring to police action on Monday (October 13) morning, the letter reads: “The Hong Kong police have shown unrestrained violence and brutality, and have sullied their reputation as the finest police force in Asia.”

“Cameras caught seven policemen ganging up on single protester, who didn’t retaliate, and this image has caused us much grief and fear.”

“Thus, Mr Tam’s use of ‘You’ll Never Walk Alone’ as a tribute to police behavior is a terrible insult to us Liverpool fans.”

The pro-democracy protesters of the Umbrella Movement have been protesting for almost three weeks, and have thus far been a very peaceful and well-behaved bunch.

Most, if not all, of the violence on display stem from pro-Beijing anti-Occupy Central demonstrators and the Hong Kong police.