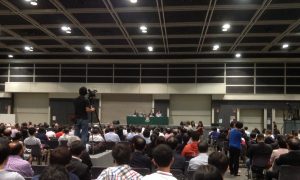 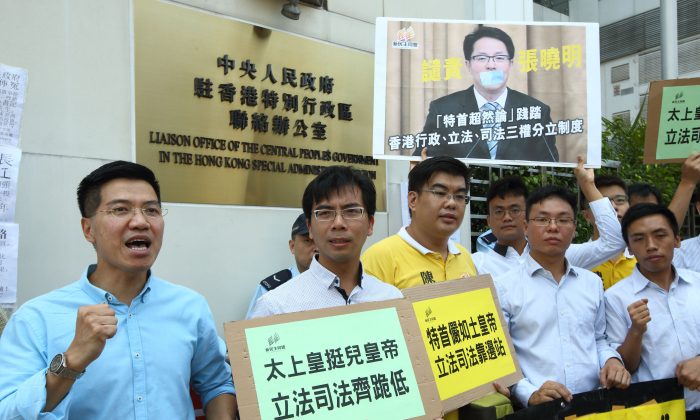 The members of Neo Democrats protest against Zhang Xiaoming, director of the Liaison Office, for his remark that the Chief Executive is superior to the executive, legislative and judicial branches of the SAR government and asked him to apologise in front of Liaison Office on Sept. 15, 2015. (Epoch Times)
HK Buzz

HONG KONG—Speaking at a conference marking the 25th anniversary of the Basic Law, Hong Kong Liaison Office Director Zhang Xiaoming made the controversial remark that the Chief Executive is superior to the executive, legislative, and judicial branches of the Hong Kong SAR government.

He also said that separation of powers among the three branches could only be applicable to sovereign states and had never existed in Hong Kong.

One does not have to be a legal expert to recognize that Zhang’s comments are a total contravention of the Basic Law. For instance, Article 2 of the Basic Law clearly endorses the separation of powers by according equal status to the three powers, stating that the Hong Kong SAR enjoys executive and legislative branches, and an independent judiciary.

Moreover, Article 43 mentions that the Chief Executive shall be accountable to the central government and the SAR, while Article 85 says that the SAR shall exercise judicial power independently and free from any interference.

Both of these articles make it plain that the Chief Executive is by no means above the three powers.

As the territory’s top representative from the central government, Zhang is obliged to follow the Chinese Communist Party line. His comments, absurd as they may be, must be taken seriously.

Following the issuance of China’s white paper on the “one country, two systems” policy for Hong Kong in June 2014, as well as the August 2014 decision of the National People’s Congress Standing Committee on Hong Kong’s electoral reform last year, they should be seen as a continuation of the central government’s hard line policy on Hong Kong.

Evidence of increasing central government intervention in the territory’s administration can be found in almost all the major sectors. A mainland Chinese academic speaking at the same event went so far as to question the continuing viability of “one country, two systems.” That should also not be considered a coincidence.

Clear signs are emerging that Hong Kong’s “one country, two systems” principle is in great jeopardy. To preserve the territory’s way of life, Hong Kong people have no choice but to persist in their struggle for freedom and liberation.