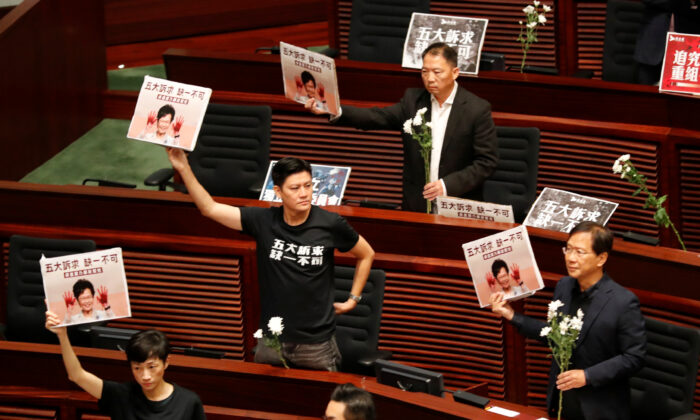 Pro-democracy lawmakers hold up placards with the words "Five demands, not one less" in the Legislative Council, as Hong Kong's Chief Executive Carrie Lam takes questions from lawmakers regarding her policy address in Hong Kong on Oct. 17, 2019. (Kim Kyung-Hoon/Reuters)
HK Current Affairs

HONG KONG—Pro-democracy lawmakers in Hong Kong heckled the city’s embattled leader and called for her to step down on Oct. 17 during a legislative session that was repeatedly suspended as several politicians were manhandled out of the chamber.

It was the second day of chaos in Hong Kong’s Legislative Council as leader Carrie Lam tried to answer questions about her annual policy address, which she was forced to deliver by video link on Wednesday after similar disruption in the assembly.

The turmoil in the legislature underscores the deepening political rift in the city, with no end in sight to the often violent anti-government protests that began in opposition to an extradition bill but have evolved into a broad pro-democracy and anti-Beijing interference movement.

In the latest street violence, masked assailants wielding knives and hammers attacked the leader of one the biggest pro-democracy groups in the Chinese-ruled city on Wednesday.

Rights group Amnesty International urged authorities to investigate what it described as a horrifying attack that would send a chilling signal.

Lam, who is backed by China’s communist regime, announced measures on Wednesday to tackle the city’s chronic housing shortage in her address after she was jeered in the chamber.

Again on Thursday, pro-democracy lawmakers shouted for Lam to resign, saying she had blood on her hands.

They also called on her to address protesters’ key demands—something her policy address largely ignored.

About a dozen members of he assembly were ejected, shouting and waving placards as security guards marched them out.

Lam stood silently amid the ruckus, offering no response to calls for her resignation and a calm defense of her policies.

“I hope the lawmakers can understand one policy address can’t help us jump out of our mindset,” Lam said, then pointed to housing reforms and living and transport subsidies announced on Wednesday.

“I have mentioned that we will be humble, listen to different voices and up an expert commission to find a way out of the current situation we are facing,” she said.

The Asian financial hub has been rocked by more than four months of sometimes violent protests in its worst crisis in decades, posing one of the biggest popular challenges to Chinese leader Xi Jinping since he came to power in 2012.

What began as opposition to a now-withdrawn extradition bill has evolved into a movement to protect Hong Kong’s autonomy fanned by fears that China is stifling freedoms guaranteed by a “one country, two systems” formula adopted when Britain returned Hong Kong to China in 1997.

Lam offered no direct olive branch to the pro-democracy protesters in her policy address and explicitly rejected two of five central protester demands—universal suffrage and amnesty for those charged during demonstrations.

She instead hoped to ease resentment by focusing on the hot-button issue of housing costs.

“We can’t help feeling that this entire thing is part of a plan to shed blood at Hong Kong’s peaceful protests,” Mo told reporters outside the legislature.

It was the second such attack on Sham.

His group, which organized million-strong marches in June, plans a march on Sunday in the district of Kowloon, but authorities have not confirmed it will be allowed.

He was left in a pool of blood on the footpath after being set upon by an estimated five men in the gritty Mong Kok district on the Kowloon peninsula.

CHRF said he suffered three wounds to the head and has swollen knees and elbows.

From the hospital, Sham urged people not to seek revenge.

“Regardless of the identity, ethnicity, skin color of the perpetrators, the root of the problem is the violence of the regime and the political system,” he said in a statement.

“No matter how difficult the situation on Sunday might be, everyone please take care and be safe,” said Sham.

The U.S. Congressional-Executive Commission on China condemned the attack and called on the Hong Kong government to “bring the perpetrators of these attacks to justice swiftly.”

The recent attacks on #JimmySham & other District Council candidates are unacceptable acts of violence that seem intended to intimidate the people of #HongKong ahead of elections in November. We call on the #HK govt to bring the perpetrators of these attacks to justice swiftly. https://t.co/B8rcq4n2LW

Joshua Rosenzweig, head of Amnesty’s East Asia regional office, also said the attack had to be investigated to send a clear message that targeting activists will have consequences.

“Anything less would send a chilling signal that such attacks are tolerated by the authorities,” he said in a statement.

Police have vowed to investigate.

By Sarah Wu and Jessie Pang. With additional reporting by Epoch Times staff.