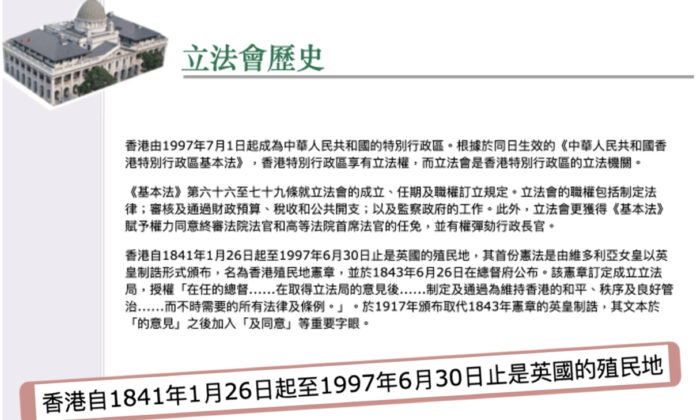 There are further signs the CCP continues to purge Hong Kong of its colonial past. After the Hong Kong government changed textbook contents, the Legislative Council website follows in unison.

Lately, the website is found to have removed the entire page of all recorded history of the Legislative Council, which had previously described Hong Kong as a “British colony.”

Lau Yung Wai, a pro-democracy Tai Po District councillor who recently posted the discovery on his Facebook page, said that even taking into account the official response from the Legislative Council, it proves that the Legislative Council has officially recognised Hong Kong as a British colony at least 24 years after the handover of sovereignty. He believes that today’s society is full of lies and calls for constant vigilance from all to distinguish right from wrong, in order to preserve conscience and justice.

At the same time, Lau Yung Wai also criticised the Legislative Council members and officials who rush to the Hong Kong July 1 commemorative celebration but did not attend the LegCo meeting.  Before they try to “butter up” their boss in Beijing by saying that Hong Kong was not a colony, they had attempted to “whitewash” what was there as history of the Legislative Council. He added, sarcastically, “It’s a really ugly sight.” He also pointed out, “What had happened is what had happened. Yes is yes. No is no. It will never flip from yes to no, or vice versa.”

On the next day (June 22) morning, the above-mentioned page was promptly deleted after being reported by the media. The current statement to introduce the history of the Legislative Council has been changed to “On June 26, 1843, Queen Victoria promulgated the Royal Charter of the “Letters Patent” at the Governor’s Office. This Charter approved the establishment of the Legislative Council.”

On his Facebook page, Lau questioned the above text in deleting the entire line “Hong Kong was a British colony from Jan 26, 1841, to June 30, 1997,” and blurred the Hong Kong colonial Charter as “this Charter.” He asks, “What does this behaviour show? Even for such a small issue, the official text could be falsified into something that meets their current requirements so blatantly. Is it so obvious by changing the details bit by bit, it is able to achieve the aim of erasing memory and obliterating history?”

Lau told The Epoch Times that he came from a history major, so he has a fond memory of the official history of the Legislative Council showing that Hong Kong was a British colony. This is not a deliberate search, rather he could not stand the behaviour of such a bunch of officials and legislators who suddenly came out and attempted to overturn the history displayed by the government’s official documents for so long. Therefore, he used the content of the official website of the Legislative Council as evidence to prove the weird official position of this government.

Apparent Admission for at Least 24 Years

However, the statement further corroborates the official stance of the Legislative Council. As of Dec 31, 2021, it still held the position that Hong Kong was a British colony. On this Lau asked further: “If not, then why is there still such a statement displayed on the official website after a full 24 years? The government needs to respond.”

If one were to go through the web page inventory website “Web Archive,” the page about Hong Kong’s former British colony status can still be seen existing on the Internet on the afternoon of June 15, 2022, while the archive on June 22 started to show something like “Cannot find the page,” on the Legislative Council website.

As a district councillor, when asked what can be done at the district council level, and whether it is possible to move a motion to be discussed there, Lau lamented that the current district council “has been castrated to pieces by the government,” pointing out that current district council regulations require only issues related to affairs of the local district itself can be discussed, otherwise it would not be accepted for discussion. For example, he recently sent a letter to the District Council requesting a discussion on the MTR Corporation’s extension of the East Rail Line. He was then asked by the District Council Secretariat to add “convenience to residents of Tai Po” on the topic before it was considered within the council meetings. Without that tag, they will be regarded as territory-wide issues and will not be allowed there.

After the page disappeared, Lau published a post on his Facebook page titled “Who is tampering with the plot?,” quoting one of Czech writer Milan Kundera’s saying, “The struggle of man against power is the struggle of memory against forgetting.” Lau reprimanded, “Authoritarian governments use their power to control official writing, aiming to completely eradicate generally accepted knowledge and facts of the past,” with the intention of “making history annihilated and obliterated.”

To conclude he made such advice. “The current society is full of lies every day. “Calling black white” is not just a textbook story and is happening in front of our eyes on a daily basis. Against all these fickle lackeys and lousy officials, who always talk nonsense, what we can do now is not to become bored and indifferent to what is happening around us, or blindly believe in the information we come across. We need to think critically for anything we doubt, record the facts, and always be vigilant. Only in this way can we discern right from wrong and preserve our conscience and justice.”