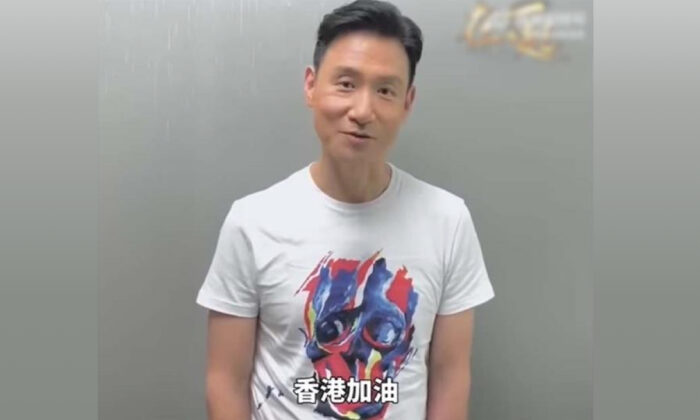 A culture of expressing patriotic gratitude has emerged in mainland China. Actors are required to record videos for greetings on national days, and the content will be inspected by the Chinese Communist Party (CCP)’s young underprevileged supporters.

Jacky Cheung Hok-yau, the “God of Songs,” who is also one of four kings of pop music in Hong Kong, also fell into the trap. A clip of his interview with the CCP’s state broadcaster, China Central Television (CCTV) was circulated on the Internet. The interview was about his greetings for the 25 year handover of Hong Kong. He was criticized for not being grateful enough and unpatriotic, and CCTV quickly deleted the clip.

According to the video, Jacky was interviewed by CCTV Channel 6 to share his feelings about the 25-year handover. The length of the video is only 22 seconds.

“Hello everyone, I’m Jacky Cheung. Hong Kong has experienced many ups and downs in the past 25 years. However, because I grew up with this city, I was born here and grew up here, I still believe in this city, and I hope it will be better than before. Hong Kong add oil!” Jacky said in Cantonese calmly.

The content was immediately criticized by “Little Pinkies” (young pro-CCP Chinese), claiming that Jacky was not patriotic enough as he only mentioned “Hong Kong” and “25 years,” and did not mention keywords such as “celebration,” “motherland” and “return” in the entire clip.

Jacky ended the interview with one of the iconic slogans of the anti-extradition movement, “Hong Kong add oil,” which touched a nerve of CCTV, so the CCP owned broadcasting company quickly deleted the clip after it was released.

Jacky has never expressed his opposition on political issues in the past. During the severe pandemic period in Wuhan the previous year, he even sang to cheer up the medical staff in mainland China, paying tribute to the medical staff who fought the COVID outbreak and saved lives on the front line.

The slogan has been seen as a way to criticize the Hong Kong national security law, which has become banned words in several events in Hong Kong.

For example, during Standard Chartered Marathon 2021, many runners were asked by the police to change their clothes because they were wearing shirts with “Hong Kong add oil,” and even their tattoos were ordered to be covered.

Willam Ko Wai-lam, chairman of the Organizing Committee of the Standard Charter Marathon, once said that “Hong Kong add oil” is a “political slogan” and should not appear in the event.