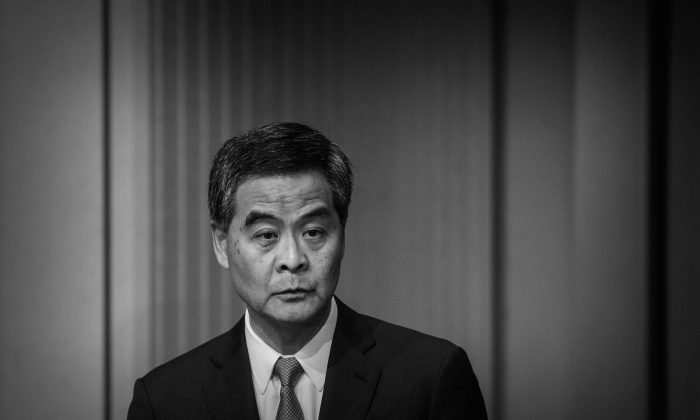 Imagine New York City Mayor Bill de Blasio announcing that he has political powers beyond the state legislature and judiciary, and answers only to the president of the United States. In another global financial hub halfway around the world, something akin to the fictive scenario has actually happened.

On Sept. 16, Hong Kong leader Leung Chun-ying told reporters at a press conference that the office of chief executive held a “special legal position that transcends” the executive, legislative, and judicial arms of the city’s government.

“Therefore, it is true that the chief executive has superior power,” said Leung, whose remarks were carried by public broadcaster Radio Television Hong Kong (RTHK).

Leung was defending a speech made four days earlier by Zhang Xiaoming, the top Chinese official at the Hong Kong Liaison Office—the Chinese Communist Party’s official presence in the region—during a seminar on the 25th anniversary of the promulgation of Hong Kong’s governing document, the Basic Law.

Zhang had said that the chief executive has a “special legal position, which overrides administrative, legislative and judicial organs,” and that it was “not accurate to describe Hong Kong’s political system as separation of powers.”

“Hong Kong people are worried about this because there is no oversight of Chinese law, unlike the British common law system.”
— Shi Cangshan, independent analyst, Chinese politics

Zhang Xiaoming and Leung Chun-ying have since been sharply criticized by lawmakers, academics, and members of the judiciary in Hong Kong. The southern Chinese city, a former British colony turned special administration region, was granted a “high degree of autonomy” to rule itself after being returned to mainland China in 1997.

If Leung Chun-ying is “above legislative, executive and judicial powers, then what’s the difference between Leung Chun-ying and a feudal emperor?” queried Alan Leong, a prominent pro-democracy legislator, during a RTHK radio show.

Johannes Chan, the dean of the University of Hong Kong’s law faculty, told Radio Free Asia that Zhang Xiaoming’s remark was a violation of the Basic Law, which clearly defines the duties and powers of the three branches of the government. Hence, Zhang’s statement did not have any legal basis, Chan argued.

Shi Cangshan, an independent analyst of elite Chinese politics based in Washington, D.C., feels that the issue of the chief executive’s powers has less to do with how it is interpreted than the current political realities of Hong Kong.

“Hong Kong people are worried about this because there is no oversight of Chinese law, unlike the British common law system,” Shi told an Epoch Times reporter over the telephone.

But for the Chinese regime, “the law is just a tool,” Shi continued. The chief executive might have “transcendent” power, but he is ultimately a servant of the Chinese Communist Party.

Since the handover of Hong Kong to China, the Chinese regime has meddled in the city’s legislature, including the attempt to pass a controversial national security law in 2003.

Last year, China’s rubber stamp legislature passed a white paper in June declaring “comprehensive jurisdiction” over Hong Kong. On Aug. 31, Beijing offered an election reform plan that allowed Hongkongers to vote for a chief executive by universal suffrage, but only from two or three candidates handpicked by a nominating committee stacked with Beijing interests.

These rulings sparked an uproar from Hongkongers, who saw the Chinese regime as going back on its arrangement to introduce fuller democracy in the city, and backtrack on the “one country, two systems” principle.

In protest, hundreds of thousands of Hongkongers took to the streets in a three month-long occupation called the Umbrella Movement last year. When the chief executive election reform plan went to a vote in June, however, it was defeated by a resounding majority after the pro-Beijing group staged a baffling eleventh hour walkout.

Frank Fang and Matthew Robertson contributed to this report.