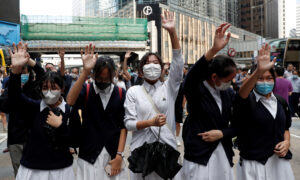 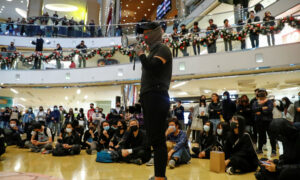 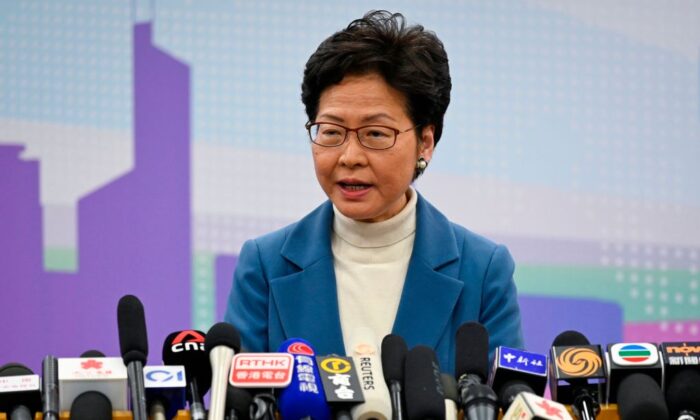 Lam went to Beijing on Dec. 15 for a regular duty visit. It marked Lam’s first meeting with top Chinese leaders since Nov. 24, when the city’s pro-democracy camp secured a landslide victory in local district council elections over pro-Beijing candidates.

The elections have been viewed as a vote of no confidence against Lam, with polls drawing a record turnout—more than 2.94 million Hongkongers cast ballots out of the 4.14 million who are eligible to vote.

Xi and Lam met at Zhongnanhai, the headquarters of the Chinese Communist Party in Beijing.

“The situation in Hong Kong in 2019 was the most complex and difficult since its return to the motherland,” Xi told local media on Dec. 16, in brief comments before a closed-door session.

“We will continue to be unwavering in supporting you [Carrie Lam] to lead the Hong Kong special administrative government to govern in accordance with the law,” Xi said, as Lam stood next to him.

Xi added that Beijing is “unwavering in supporting the Hong Kong police to firmly uphold the law,” while expressing the hope for unity in Hong Kong to get the city back on the right path. He also voiced support for Hong Kong police’s “strict law enforcement.”

Before meeting with Xi, Lam met with Li at the Great Hall of the People, a state building located at the western edge of Tiananmen Square in Beijing.

“Hong Kong right now has not stepped out of its dilemma,” Li said, while Lam and other Chinese officials listened.

“The SAR [special administrative region] government must continue its efforts, end violence, and stop the chaos in accordance with the law and restore order,” he added.

Li also stated that the central government will continue to uphold the “one country, two systems” principle, and will “firmly support” Lam and her administration in their governance of Hong Kong.

When Hong Kong reverted to Chinese rule in 1997, the regime pledged to allow the city to retain its autonomy and freedoms enjoyed under its political system inherited from Britain. However, critics say this guarantee has gone unfulfilled as the regime has steadily sought to increase its influence over the city, with the latest example being the now-withdrawn extradition law that catalyzed the current protest movement. The bill would have authorized the transfer of people to the mainland to face trial in courts controlled by the Chinese Communist Party.

The Hong Kong Public Opinion Research Institute (HKPORI), in its latest survey of 1,014 people from Nov. 28 to Dec. 3, showed that Lam’s approval ratings dropped to 19.7 points, from 44.7 points at the end of May—before the start of the mass protests.

Lam’s trip to China came amid speculation that Chinese leadership may issue new directives to resolve the six-month-long protest movement in Hong Kong, including a cabinet reshuffle.

In a press conference in Beijing after the meetings, Lam said Xi’s support for Hong Kong’s police won’t change how they enforce the law.

When asked whether she faced pressure by Chinese leaders to pass Article 23, Lam said the priority now is to stop the “violence” in Hong Kong, and any discussion on this law would require a “good condition.” Article 23, an anti-subversion law that many feared would impinge on civil liberties, was scrapped following a mass protest in 2003. While some pro-Beijing officials in Hong Kong have pressed for the bill to be reintroduced, that hasn’t happened.

When asked about foreign experts resigning from their roles on a police watchdog panel, the Independent Police Complaints Commission (IPCC), Lam responded by urging the public to respect the panel.

The IPCC, a statutory body that reports to the Hong Kong police, was tasked by the government in July to investigate accusations of excessive use of force by police during the protest movement. Its report is due to be released early next year.

Five foreign experts announced their resignation from the IPCC on Dec. 11, citing the body’s lack of “powers, capacity, and independent investigative capacity” to complete the report examining complaints against police since June.