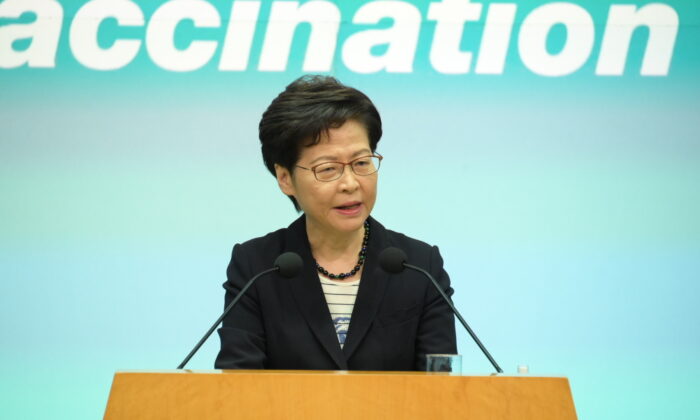 Lam was responding to U.S. criticism of the Hong Kong government’s actions against local pro-democracy tabloid Apple Daily in her weekly press conference. On June 17, some 500 Hong Kong police raided Apple Daily’s headquarters and arrested five directors of the newspaper.

Three of the directors were released on bail on June 18. Two others, Ryan Law, the paper’s editor-in-chief, and Cheung Kim-hung, chief executive officer of the paper’s publishing arm Next Digital, appeared in court on June 19 but were denied bail. Law and Cheung are charged with “collusion with a foreign country or with external elements to endanger national security,” a crime under the city’s draconian national security law.

Hong Kong authorities also froze about HK$18 million ($2.32 million) from three companies linked to Apple Daily. The move has left the paper in a financial crunch and Apple Daily has requested the Hong Kong government’s security bureau unfreeze its bank accounts and assets.

The Hong Kong government and Beijing have since drawn international criticism over the raid and arrests. On June 17, U.S. State Department spokesperson Ned Price said the collusion charges were “politically motivated.” He added that it was deplorable that Hong Kong police would use some Apple Daily articles as evidence, since “exchanging views with foreigners in journalism should never be a crime.”

Lam rebuffed Price’s statement and accused the United States of having “double standards.” She also said the Hong Kong authorities’ actions could not be described as suppressing press freedom.

When asked about unfreezing Apple Daily’s assets, Lam said the decision was up to John Lee, Hong Kong’s security secretary.

“What we see from Taiwan, and also from the global democracy front, is Carrie Lam is doing whatever she can to ‘beautify’ the #CCP [Chinese Communist Party] atrocity and crackdown in #HongKong,” NPP stated on Twitter.

Lam’s remark echoed those made by China’s Foreign Ministry spokesperson Zhao Lijian. At a daily briefing on June 18, Zhao said the U.S. State Department should not “interfere” in China’s “internal fairs” over Apple Daily.

Apple Daily has announced that it will hold a board of directors meeting on June 25 to determine the paper’s future. Additionally, the paper said that it could stop updating news on its website in the early hours of June 26 and print its last copies of the newspaper on the same day.

The State Department continued its criticism of the Hong Kong government on June 21, when Price responded to a question at a briefing about how Apple Daily could be forced to shut down this week.

“We continue to be deeply concerned by the Hong Kong authorities’ selective use of the national security law. We’ve seen it used in appalling ways, including to arbitrarily target independent media organizations,” Price said.

He added, “It not only undermines Hong Kong’s democratic institutions, but it really does set back Hong Kong’s viability as an international business hub.”

The Congressional-Executive Commission on China (CECC), a bipartisan group of U.S. lawmakers, called for additional U.S. sanctions against Hong Kong government officials over what has happened to Apple Daily.

“The ongoing effort to silence @AppleDaily is another egregious abuse of the rights guaranteed to the #HongKong people,” CECC wrote on Twitter on Monday.

It added: “It is time for the [Biden] Administration to support an urgent @UNHumanRights discussion on #HK & consider add’l sanctions for those officials stifling HK’s freedoms.”

“If the authorities manage to shut down the Apple Daily, as is clearly their intention, the future of Hong Kong appears bleak,” stated IBAHRI Co-chair Anne Ramberg.

She added: “IBAHRI calls on the United Kingdom to commit to upholding the Sino–British Joint Declaration, under which citizens of Hong Kong remain entitled to greater legal protection. Additionally, we urge the international community to take more effective action in response to such blatant disregard for human rights.”