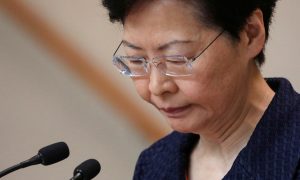 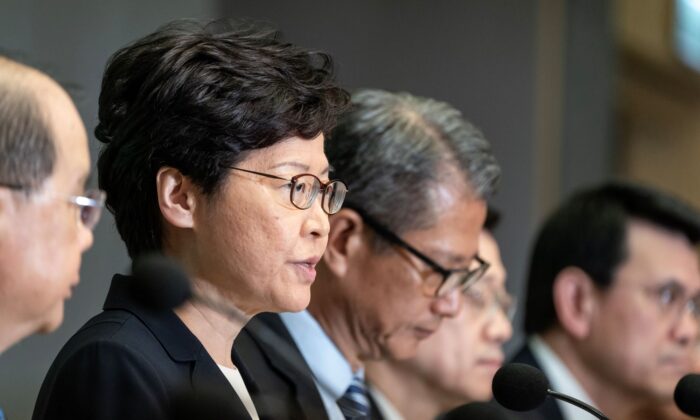 Hong Kong leader Carrie Lam, flanked by a dozen of ministers in her government, announced she has exercised a local emergency law to ban masks in the vexed city.

Lam told a press conference that the decision was made after a special meeting the morning on Oct. 4. She explained that the decision to exercise the emergency ordinance and enact an anti-mask law was not easy, but necessary given there was an “escalation of violence” recently, and reaching an “alarming level” in recent days.

“We are in serious public danger,” she said.

The anti-mask law, also known as Prohibition on Face Covering Regulation, will take effect midnight Oct. 4, Lam said. She added that there would be exceptions to the law and it would only target “rioters.”

Both Beijing and Hong Kong governments have frequently slammed Hong Kong protesters, who are fighting for greater democracy and autonomy from the Chinese Communist Party in the now 17th consecutive week, as “rioters.”

Lam said that similar laws had been introduced in other jurisdictions around the world, and that the new law would create “a deterrent effect” against “rioters” and assist the police.

Hong Kong’s Security Minister John Lee explained that under the anti-mask law, it will be illegal to wear a mask if attending a public gathering of more than 50 people, or when taking part in a demonstration with more than 30 people. Mask-wearing will also be illegal for those taking part in an unlawful assembly.

Lee added that anyone found breaking the anti-mask law could be sentenced to one year in prison or face a HK$25,000 ($3,188) fine.

When asked by a reporter if she would consider either stepping down or establishing an independent inquiry to de-escalate tensions instead of invoking her powers under the emergency ordinance, Lam replied that stepping down would not help with the situation. She has already voiced her opposition to an inquiry.

Protesters are demanding that an independent inquiry be established to investigate instances of police violence.

Lam said at the press conference that she was “not 100 percent sure” that the new anti-mask law would achieve its objective, and if the situation in Hong Kong worsened, her government would continue to look for other measures.

When asked if she got Beijing’s approval during her recent trip to enact the new law, she said she had not had any discussions about the law with any Chinese officials.

While Lam was speaking at the press conference, Hong Kong’s Education Bureau sent a letter to schools calling on parents and teachers to set a “good example,” and warning students not to take part in “dangerous and illegal events.”

Hong Kongers took to her Facebook account to express their anger, flooding her latest post published on Sept. 27 with dissatisfaction at her decision, with some writing “Five Demands, Not One Less.”

Joshua Wong, the iconic student leader of Hong Kong’s 2014 Umbrella Movement and secretary-general of pro-democracy party Demosistō, took to his Twitter to say that the law would not stop protesters.

“#CarrieLam clearly didn’t learn from her mistakes. We know well that the law would not deter protestors from taking to street. Further public outcry is escalated by the govt,” he wrote.

Prior to Lam’s announcement, thousands of protesters, many of them office workers, donned a mask and took to the streets in Central to demand that the Hong Kong government meet their five demands, and their opposition to any anti-mask law, according to local Hong Kong media.

China’s hawkish media Global Times, in an opinion article published on Sept. 12, stated that the anti-mask law was “imperative” for Hong Kong, since masked protesters tended to “harbor sinister designs.” At the time, the city’s justice secretary Teresa Cheng first confirmed that the government was evaluating the emergency ordinance and looking into a bill banning protesters from wearing masks.

Following media speculation on Oct. 3 that the Hong Kong government would push forward the anti-mask law, people have been voicing their opposition to it.

Civil Human Rights Front (CHRF), the main organizer behind some of the city’s largest demonstrations, voiced its opposition against the anti-mask law in a statement, saying that invoking the emergency ordinance would mean the end of “one country, two systems” in Hong Kong, and the city would become nothing but a Chinese colony.

It questioned the need for the anti-mask law since protesters wear masks to protect themselves, particularly from the police’s tear gas during protests. It called on the Hong Kong police force to remove their masks first so that police accountability can be realized.

In the United States, the Congressional-Executive Commission on China (CECC) declared that “Invoking the Emergency Regulations Ordinance to ban mask-wearing will not address the grievances underlying 4 months of protests” on Twitter.

“@CECCgov Chairs urge the #HongKong govt to seek a political solution that addresses the key demands of the protesters,” it tweeted.

In the morning on Oct. 4, Civic Party lawmaker Dennis Kwok said the anti-mask law would be the beginning of authoritarianism in Hong Kong, according to RTHK.