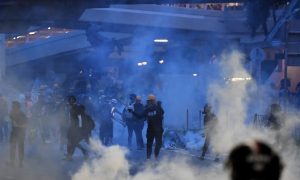 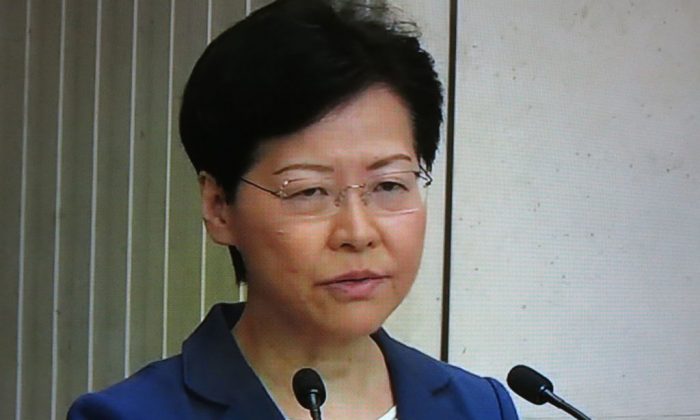 In a raucous press conference in the morning on Aug. 13, Hong Kong leader Carrie Lam was criticized by a reporter for evading a question about the withdrawal of the now-suspended extradition bill.

“In terms of withdrawing the bill, using this specific term, which the protesters have called for, do you as Hong Kong’s leader have the autonomy to decide to withdraw the bill, yes or no, or is this something that Beijing has to approve as well? In other words, have your hands been tied by Beijing in not allowing the bill being withdrawn?” asked a Reuters reporter.

So journalists got into a bit of a shouting match with #HongKong leader #CarrieLam, as they accuse her of sidestepping questions & not answering seriously. Some watching it online are supportive of journalists, while a few don’t understand the shouting/were against the reporter pic.twitter.com/PtGy7B96NG

In response to the question, Lam responded that she had answered the question on previous occasions. Before she could elaborate further, she was interrupted by the reporter.

“But you’ve evaded the question,” the reporter said.

Lam then went on to say that her government had come up with responses in the last two months, before concluding her terse response.

“You have not answered the question. You evade the question,” the Reuters reporter replied again.

Hongkongers have taken to the streets en masse beginning in June against the government bill, amids fears that the proposed laws would make those passing through Hong Kong vulnerable to extradition and trial in China’s courts, which are notorious for the absence of rule of law.

Lam has since suspended the bill and called the bill “dead,” but she has refused to meet protesters demand that the bill be formally withdrawn.

Clashes between police and protesters had turned violent late Aug. 11 after protesters splintered into small groups in order to avoid direct confrontations with police. Police have been accused of abusing their power after they fired tear gas at protesters inside a subway station and shot rubber bullets and pepper pellets towards protesters at close range.

Aside from failing to answer the question about the bill’s withdrawal, Lam stated that protesters’ recent actions, including rallies at the Hong Kong International Airport against excessive use of force by police had damaged Hong Kong’s core value of rule of law.

Thousands of Hongkongers had taken part in a sit-in at the airport since Aug. 9 in an effort to inform arriving passengers about the reason for the mass protests. In the afternoon on Aug. 12, airport authorities cancelled hundreds of flights on the grounds that the protests had “seriously disrupted” airport operations.

The airport reopened in the morning hours on Aug. 13.

Lam also expressed her sympathy to the female medic who was hospitalized after being shot in the eye with police’s bean bag round over the weekend, saying that she would visit if the medic agreed.

Protesters who showed up at the sit-in at the airport on Aug. 12 shouted slogans such as “An Eye for An Eye,” while some covered up their right eye in solidarity with the injured medic.