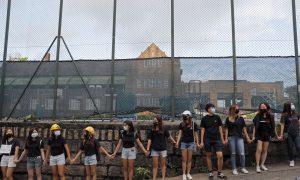 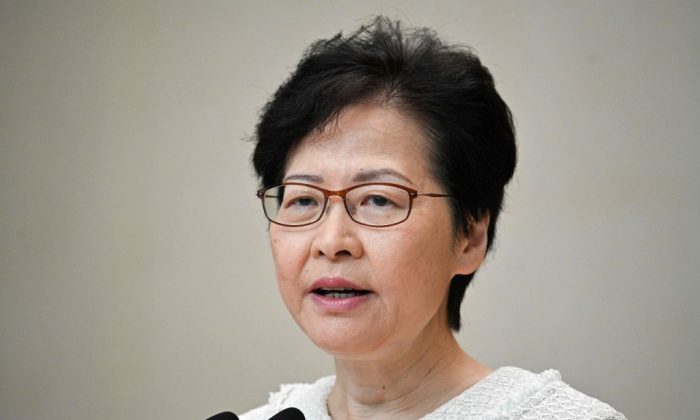 Hong Kong leader Carrie Lam sided with Beijing’s longstanding rhetoric against the United States on Sept. 10, when she called the U.S. Congress a “foreign” influence trying to interfere with the city’s internal affairs.

“It’s extremely inappropriate for foreign parliaments to interfere in HKSAR [Hong Kong Special Administrative Region] internal affairs in any way, and (we) will not allow (the United States) to become a stakeholder in HKSAR matters,” Lam said in a press conference.

She made the remark in response to a protest on Sept. 8, when tens of thousands of Hongkongers took part in a march to petition the U.S. Congress to approve legislation that would support human rights in Hong Kong.

The bipartisan bill, known as the Hong Kong Human Rights and Democracy Act of 2019, was first introduced in June. It would require the U.S. secretary of state to annually certify that Hong Kong is “sufficiently autonomous” from China to merit special treatment from the United States that is afforded to it under the 1992 U.S.-Hong Kong Policy Act.

Under that measure, the United States agreed to treat Hong Kong as a separate entity to the mainland in economic and trade matters, even after the former British colony was handed back to China in 1997 after the signing of the 1984 Sino–British Joint Declaration. As a result, Hong Kong goods entering the U.S. market currently are not penalized by the Trump administration’s tariffs on goods from mainland China.

Protesters supporting the bill say the Act would secure their rights as outlined in the city’s Basic Law, or mini-constitution, which are under siege by the Hong Kong government and the Chinese Communist Party in its recent encroachment on Hong Kong’s judicial independence.

Chinese officials have accused foreign governments, particularly the United States and the United Kingdom, of fomenting chaos in Hong Kong. They maintain that the protests in Hong Kong are an “internal affair.”

On Sept. 9, former U.S. Defense Secretary Jim Mattis said the Hong Kong protests were “not an internal” Chinese matter and that the United States should offer at least moral support to the demonstrators.

“They said it would be two systems, and the extradition law was a violation of that,” Mattis added, commenting on a statement from the Hong Kong government on Sept. 9.

The “one country, two systems” model was said to be a guarantee of Hongkongers’ basic rights and freedoms when the city was handed back to Chinese rule in 1997.

Public anger at the erosion of Hong Kong’s liberties have propelled protesters to continue staging rallies and marches, now in their 14th week, despite Lam conceding on one of their demands by formally withdrawing her government’s extradition bill last week—almost three months after the mass protests against the bill started.

Lam reiterated on Sept. 10 that she had taken steps to hold dialogue with the public—a statement that has been challenged by protesters as insincere, as the Hong Kong police have continued to adopt violent tactics to disperse protesters.

When asked about the protesters’ calls for establishing an independent inquiry to investigate alleged police brutality, Lam chose not to address the question.