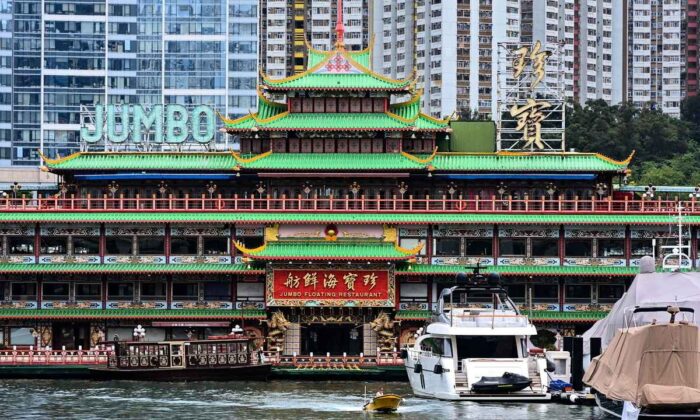 Hong Kong’s famous Jumbo Floating Restaurant was once used in 2011 by the production team of the American thriller “Contagion” as the setting of a Macau casino. A customer (Beth) was the first to be infected with an unknown virus. In the plot, the virus carried by a bat, mixes with a pig virus, and eventually a SARS-like plague breaks out leading to a loss of social order. Society is eventually saved by vaccines.

Eleven years later, the “Pearl of the Orient” in the South China Sea, once flourishing in the 70s ad 80s, was strongly hit by the pandemic and saw its shimmering lights diminish and disappear.

The Jumbo Floating Restaurant, flourishing through 10 years of Hong Kong’s colonial history, was unable to find a suitable manager since its closure in March 2020. When its license expired, it was taken to Cambodia on June 14. But on the evening of June 18, rumours spread that the iconic Restaurant was capsized and sank during adverse weather.

The disappearance of the restaurant perhaps means the disappearance of memories for many Hong Kongers who grew up in the 70s and 80s. “Every famous tourist city has a landmark, and Hong Kong’s landmark is the iconic Jumbo floating restaurant,” said Liu Xiliang, former full-time consultant to the Central Policy Group and Youtube current affairs commentator.

In 1840, the United Kingdom declared war on China’s Qing government and launched the first Opium War. Two years later, the Qing government was defeated and leased Hong Kong to the UK, thus beginning Hong Kong’s history as a British colony.

In 1841, the British government officially declared Hong Kong a free port. Its tax policy was extremely favorable to Chinese businessmen and ships, hence attracting import and export ships from China and Europe. International trade became an important anchor of the Hong Kong economy.

In the 1950s, Hong Kong’s economy with strong sectors like textiles, garments, and plastic, grew almost exponentially, and claimed the city as one of the “Four Asian Tigers.”

In the 1980s, Hong Kong underwent an economic transformation after WW2. The economy developed its tertiary sector especially in financial services, and Hong Kong began to establish its status in international trade and as a budding financial hub in Asia and the rest of the world. At the same time, it became a world-famous tourist city.

“She carries the East’s traditional culture and grace, but also the glimmers of the Western civilization, hence she won the renowned title as the Pearl of the Orient,” said Liu Xiliang.

Former Hong Kong Chief Executive Carrie Lam proposed in her 2020 policy address to “revitalize the Jumbo Floating Restaurant,” but a change of tone occurred in May 2021 when she said the government will not use any public funds to carry out the “conservation” of the Restaurant.

On July 1, 1997, the UK and China signed the Sino-British Joint Declaration, ending the 156-year British rule of Hong Kong. However, the new editions of secondary history textbooks completely deny Hong Kong’s past as a British colony. The Chinese Communist Party (CCP) claims that Hong Kong and Macau were only under colonial rule and the CCP never gave up sovereignty over either city.

Liu thinks the reason the Chinese authorities are doing this is to remove Hong Kong’s autonomy in the Basic Law, and putting that power in its own hands.

According to the Basic Law, in addition to defense and foreign affairs, Hong Kong enjoys a high degree of autonomy and will maintain the status of a free port, separate customs territory, and an international financial center. In areas such as economics, trade, finance, shipping, culture, tourism, and communications, it can develop relationships and sign agreements with international governments and organizations independently from mainland China.

Liu thinks the CCP is changing textbooks to brainwash every Hong Kong citizen and deny Hong Kong’s past as a British colony, hence “washing away the colonial movement” and forgetting about the history from The Republic of China (different to People’s Republic of China), leaving only Communist China. He further said that changing textbooks is “always used by the CCP, from culture and history then to politics and eventually to organizations and citizens.”