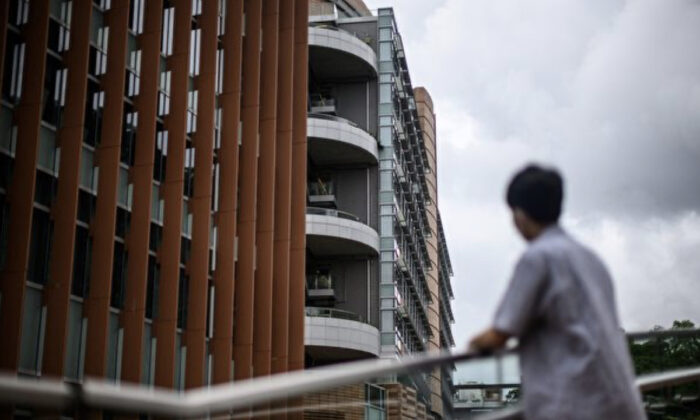 An 18-year-old high school student who was injured in the 2019 anti-extradition movement was standing outside a university in Hong Kong on June 2, 2020. (Anthony Wallace/AFP/Getty Images)
Thinking About China

An analyst from Hong Kong just sent me a visual image and message. It is a front cover picture, depicting Xi Jinping in a Chinese emperor gown from a few years back. It was actually the front cover portrait of the Economist magazine. The reason why this analyst sent this satirical picture to me, has to do with the 20th CCP National Congress in China which takes place in mid-October, and whether Xi, as the current leader of China, can rule the most populated country on earth for the third term—or “forever.”

This hard-working analyst once told me, that if Xi remains in power for the third term, a lot of people in Hong Kong and China will have to take more “immediate decisions”—staying and living under fear, or leaving for the love of freedom.

Just rewind the clock back to 2020, exactly two months before the enactment of the National Security Law (NSL) in Hong Kong. The propaganda ads put up by the government suggested that the NSL would strengthen one country, two systems in Hong Kong.

The former Chief Executive (CE) of Hong Kong Carrie Lam also claimed that the NSL would affect very few people in Hong Kong. Not sure how many people would still believe that now. And just a few days ago, the former CE was caught on social media shopping in the “wet market” in Wan Chai. But this time, Lam is no longer in power and has been replaced by the no-nonsense and former career police John Lee Ka Chiu.

For Hong Kong, the financial services and business sectors have “contingency plans” for the inevitable exodus, due to the once famed international city’s uncertain political future. As for Hong Kong’s financial services regulator, the Securities and Futures Commission (SFC) CEO Ashely Alder will step down in September. No successor is being announced, and all eyes are on this particular person.

All we know is, that long-time deputy CEO Julia Leung will “deputize” the soon empty role of SFC head until Beijing calls the shots to find a permanent replacement. It is to the international community and industry’s expectation that the SFC “should not be politicized,” nor the regulator being unduly influenced by Beijing. I wish this would be the case for Hong Kong.

For businesses, as long as Hong Kong has a lot of arbitrary arrests and detainees due to the alleged violation of the National Security Law (NSL), the city will never go back to normalcy and people will stop pumping money into the Hong Kong system.

We also witnessed recently that the “selling of the Hong Kong dollars” to buy the US has been at a record high, and to a certain extent, it is a confidence of people’s view on the confidence and stability towards the once famed international city’s political and economic future. The “selling pressure” from the real estate market is also obvious, most aggressive buyers can get good bargains now, and betting on Hong Kong will “recover” from all forms of turmoil. I wish the “willing sellers” will also make intelligent currency hedge, and plan for the future.

The chilling effect of the NSL has been surreal over the past two months. The NSL’s definition of secession, sedition, subversion, and collusion with foreign forces have been vague, but it surely has empowered the police to arrest anyone, with uncontrolled risks of abusing their power, end of the story. An uplifting story developed in August though: former legislator and long-time human rights activist and lawyer Albert Ho Chun Yan was allowed out on bail, after being charged with NSL violation on “illegal assembly”. He was already detained behind bars for 15 months.

The high-profile arrest of Next Media founder Jimmy Lai and its top executives more than a year ago has not been forgotten: it raised the red flag for those wanting to do business in Hong Kong. Like so many NSL detainees, almost all 200 plus of them have been behind bars for more than a year, and a few close to two years before the trial begins.

The unjustified act of “punishing the wrong side” did not go unnoticed, and the international community cannot be fooled twice, that Hong Kong is “back to normal”. It would also be interesting to see whether the so-called “international banking forum” in Hong Kong this coming November will attract any big corporations, when Hong Kong still has a restrictive COVID policy and travelling to Hong Kong is viewed by the western world as “high risks”.

And back to the core of the problem: one country two systems in Hong Kong is gone. The NSL was also brought into Hong Kong without consultation in mid-2020 ̶ it has changed the hard reality of doing business in Hong Kong forever. The rule of law in Hong Hong is overlayed with rule by fear. The tactics used to suppress the vocal ones in mainland China (too long a list) are now fully integrated into Hong Kong. Is there still time to come to our own rescue?

More single-family offices that I know, with names to be disguised, keep on “divesting” their Hong Kong real estate portfolios with a deep “hair cut”. The owner/portfolio manager of the family offices wants to complete all the closing sanctions as soon as possible. Offshore accounts set up in Singapore, the UK, and Jersey Channel Islands to secure the sale proceeds from real estate are almost a norm for sophisticated investors. Family offices re-allocate outside of Hong Kong become a norm.

There are many other reasons for people who are residents or permanent residents of Hong Kong to resettle in other parts of the world, perhaps even temporarily. For corporates, there is no strategic advantage for global businesses to invest heavily in Hong Kong now due to political uncertainty.

The exodus of funds and talents, especially from a professional level, has been a knee-jerk reaction to the political unrest in Hong Kong that has changed the way of doing business in this city forever. Our Hong Kong, once an international city that most people have aspired to, has fallen from its glory. Beijing might never understand the damage it did is unrepairable. For those who decide to stay, it means so much more than ever before, and good luck.