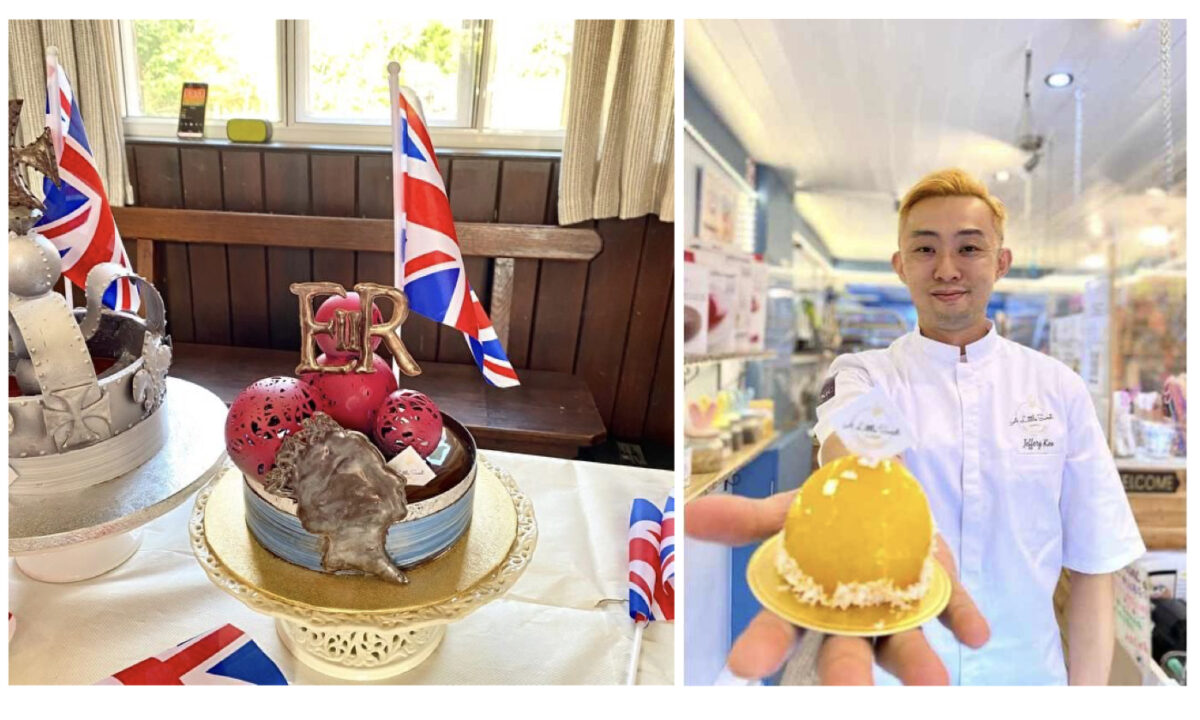 Hong Kong-born star pastry chef Jeffrey Koo was invited by the local city council to make a cake for the Queen of England for the 70th anniversary of her accession to the throne. (Courtesy of Jeffrey Koo)
Bright

Hong Kong star pastry chef Jeffery Koo chose to move to Manchester, England a year and a half ago and opened his own brand cake shop “A Little Sweet,” which has become a favourite among many locals.

He was also invited by the local city council earlier to make a platinum jubilee cake for the Queen of England for the 70th anniversary of her accession to the throne. He shared his experience with the Epoch Times.

Jeffrey’s bakery in Manchester mainly focuses on chocolate desserts and cakes, but it also sells many Hong Kong people’s favorite sweets, which include egg tarts, pineapple buns, and checkered waffles, among others. In addition to locals, many Hong Kong immigrants also make a special trip to come to buy from his shop.

Platinum Jubilee Cake for the Queen

Jeffery said he had previously received an order from the local city council to make a cake for the Queen’s 70th anniversary of her accession to the throne. The bakery made three cake designs, which include a mango-flavored layer cake. “Some people may ask why the word ‘Hong Kong’ is added, and this is because the cake has Hong Kong elements and is also produced by a Hong Kong company. Combined with the British style of the crown, this design combining the east and the west is perfect.”

The second cake is a hazelnut cake. The important element of this cake is the image of the Queen. “This design is more traditional, with red representing England and E-R representing the Queen’s initials.”

The third cake is a chocolate crown cake which is about 30cm in height. The production and transportation process is the most difficult part. “Because the cake is relatively tall, safety measures must be taken before transportation to avoid any accidents. In addition, temperature preservation is also a difficult task. We need to maintain the temperature of the cake to keep it from melting. Upon arrival at the venue, we must also assemble all parts quickly to keep the texture of the cake.”

Jeffrey said he had mixed feelings when producing these cakes to celebrate the Queen’s accession to the throne. As a native who was born in Hong Kong when it was under British rule, he felt very honored to be able to contribute to the country which was once the city’s suzerain.

He expressed that as a chef from Hong Kong, being able to contribute to this once-in-a-century celebration is a rare opportunity. At the same time, this opportunity also allows Hong Kong people to integrate into the local communities.

In addition to making cakes, Jeffery’s bakery also received an invitation from the local TV station, Channel 4, shortly after its opening. He was invited to participate in “The Great British Bake Off,” which is the country’s largest baking competition, to compete with different chefs across the country.

He said that as the filming of the competition program is still in progress, he cannot reveal too much information at the moment because of confidentiality terms. However, he said since the UK is so big (compared to Hong Kong), it takes him half a day to travel for each video shoot which makes him very tired.

“The whole competition is composed of many mini-tasks, as well as telephone interviews and film sessions to introduce his works. In the end, twelve teams will be selected and divided into two groups of six. After that, three teams from each group will be selected to compete for the champion.”

He said that because his wife is busy with the cake shop, his assistant in this competition is his sister-in-law Venus who has no baking experience. Compared to other teams which are all experienced professional chefs, his difficulties can be imagined, “But it doesn’t matter, having been shortlisted in the final stage alone shows the world that Hong Kong people are also capable of gaining a foothold.”

Jeffrey Koo started his career in the Mandarin Oriental Hotel in Hong Kong. He is a protégé of the famous French chef Yves Matthay, and he also studied with another French chef Pierre Gagnaire. In the past, he has participated in many competitions and demonstration performances all around the world, and he is best at the modeling art of chocolate desserts.