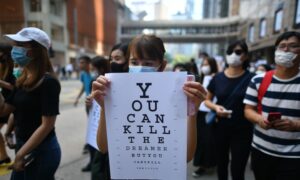 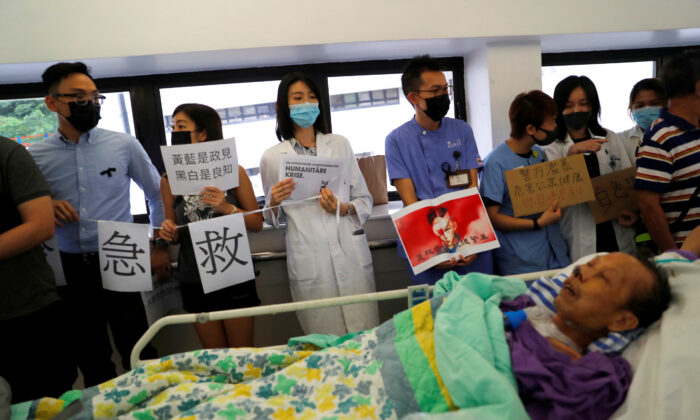 A patient is wheeled past as healthcare staff hold posters and participate in a human chain to protest against what they say is police brutality during the anti-extradition bill protests, at Queen Mary Hospital, in Hong Kong, China, on Sept. 2, 2019. (Anushree Fadnavis/Reuters)
HK Current Affairs

HONG KONG—Hong Kong’s public hospitals, long known for professionalism, have become a new front in the pro-democracy protests that have engulfed the city for more than five months.

An incident in which riot police armed with shields and batons interrogated a pregnant woman at her bedside in a hospital labor ward has become a rallying cry for medical professionals who fear that patient confidentiality and high standards of treatment are under threat.

The two officers ignored requests by medical staff to not enter the room of the pregnant woman, a 19-year-old arrested on suspicion of taking part in an illegal protest. The Oct. 7 incident was corroborated by medical staff, the city’s government-funded Hospital Authority and police.

Police rarely entered areas like labor or emergency wards before the protests escalated in June, according to Arisina Ma, president of the Hong Kong Public Doctors’ Association (HKPDA), which represents public hospital staff, and six other doctors and nurses who requested anonymity.

Now, arrests and interrogations of suspects in public hospital rooms have become commonplace, they said. That has raised concerns that protesters requiring medical care might avoid the public hospital system for fear of arrest.

On a Facebook post that was widely shared, the HKPDA questioned why police had entered the pregnancy ward, and stressed the “need to protect the rights of the patient.”

“Armed riot police are coming to public hospitals with full gear, which is scary,” said one nurse who gave his name only as Cheng. “The reputation of the hospitals is being ruined not only by Hong Kong police but also the administrative managers of the Hospital Authority who try and suppress freedom of speech among health care professionals.”

The Hospital Authority has instructed staff not to take part in public assemblies and express opinions on the protests as they say it affects hospital operations.

Ma of the HKPDA said the Hospital Authority’s management had been under “intense pressure” from the mainland and local governments, and supporters of the police, which made it hard for them to support their colleagues.

The Hospital Authority declined to comment. The police have defended their actions, calling them necessary to combat protests.

The protests were triggered by government plans to introduce a bill that would have allowed suspects to be extradited from Hong Kong to the mainland.

The extradition bill has since been withdrawn, but the protests have continued amid widespread public anger that the government has refused to set up an independent inquiry into alleged police brutality.

More than 2,100 people injured in protests have been admitted to public hospitals since June, the Hospital Authority says. Police are also treated in public hospitals, but some are later transferred to private facilities, the HKDA’s Ma said.

The city’s medical sector employs around 100,000 people. Hundreds of healthcare staff have worked as first-aid volunteers on the frontlines of demonstrations in their own time, tending to protesters injured during clashes with police.

Many have also staged protests against what they see as police brutality against demonstrators.

Hospital staff have been accused by Chinese state media and officials of failing to take a harder line against the protests. An October incident in which a public hospital expressed support for a doctor arrested near a protest was condemned by state media like Xinhua and the People’s Daily.

Many say that those seen as sympathetic to the protests have also been targeted by Beijing supporters and pro-police lobbies via online trolling or verbal complaints.

China’s Hong Kong and Macau Affairs Office in Beijing did not respond to a Reuters request for comment.

The HKPDA said its website had been inundated with thousands of critical messages posted by “supporters of the People’s Republic of China” after the doctors’ group condemned the shooting of a protester by police.

“Even if you don’t participate in anything, but you don’t stand out to condemn the protests, you will be the one doing something wrong,” said Ma.

Many protesters say they are too scared to seek treatment in public hospitals, preferring the pop-up clinics manned by volunteers that have sprung up across the city.

“It’s a very critical time because our medical system has linkages with the police force,” said a 30-year-old protester seeking treatment in a clinic who identified himself only as Ben. “People are scared to go to hospital.”

At the public hospitals, staff say they are walking a tightrope.

“We feel scared,” said one 26-year-old nurse at a public hospital who gave his name as Stephen.

Staff wearing black clothes, the color worn by many protesters, are routinely checked by police officers before entering the hospital, he said.

“For health workers it is hard to voice our views because we cannot just put down our jobs. We have to take care of our patients.”