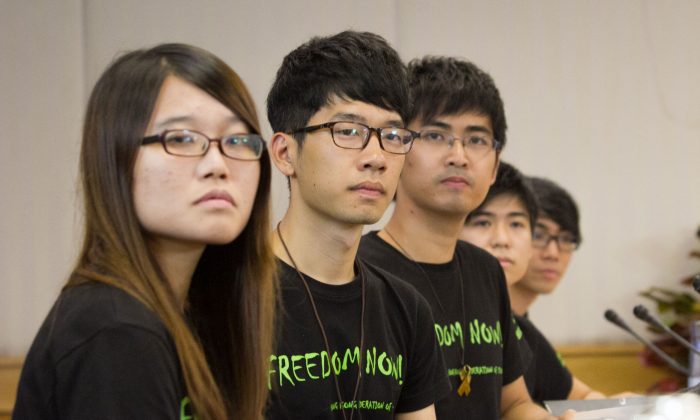 Students of the Occupy Central movement meet with Government officials on Oct. 21, 2014, in Hong Kong, for the first time since the protests began in September. (Benjamin Chasteen/Epoch Times)
China

HONG KONG–After nearly a month of civil disobedience, a group of undergraduates finally got their chance, at a meeting held in Hong Kong island’s Aberdeen district, to formally put their case before the government for how and why Hong Kong should be more democratic.

During two hours of discussion, they appeared to wring one concession from the gathered officials: that they would submit to an arm of the central authorities a report that discussed the concerns. This “sentiment report,” as it was quickly termed in Chinese, appeared to be the only concrete outcome of the talk.

It is as yet unclear whether a further round of talks will be held, or what the next step for the activists will be.

Students sat in a conference room at the Hong Kong Academy of Medicine, where the debate was held, in t-shirts with “Freedom Now” written across the front, while their counterparts were mostly dressed in charcoal suits, blue ties, and starched white shirts.

“We must appreciate that constitutional development has always been a complex and controversial topic,” said Carrie Lam, Hong Kong’s chief secretary, or head of the civil service, and the leader of the talks on the government side. “The Basic Law has clear provisions on the nomination of the chief executive by the nominating committee. This is not something new.”

This became a familiar line of argument for the government side.

The students, on the other hand, sought to advance both a basic moral argument about the simple legitimacy of a system that is not representative, as well as a highly technical, legal thrust which sought to examine the legality of certain political decisions.

“We’ve been fighting for democracy for 30 years. Now, 30 years on, we’re going absolutely nowhere…” said Alex Chow, the secretary of the Hong Kong Federation of Students, which is leading the talks with the government. “Is this system democratic? Is it free? Is it fair? Is this what we should head towards, with an unfair nominating committee? Is it going to be leading us to a fair society, or an unfair society?”

He recalled a placard he saw at the inaguration ceremony of Leung Chun-ying, the current chief executive, that said: “My father’s generation escaped from the Communist Party, and we don’t want the same fate.”

“Our demands are very simple,” he said “We want civil nominations. We don’t want annointments.”

The position of the students seemed to be that it was the responsibility of Hong Kong officials to navigate those waters with Beijing.

Carrie Lam and her colleagues countered by pointing to the law on the books, and the reality of Hong Kong being a part of the People’s Republic of China–where the Communist Party calls the shots.

Hong Kong is a former British colony that was handed over to the People’s Republic of China in 1997, under the policy of “one country, two systems,” which promised the city a high degree of autonomy, and, eventually, the right to elect its own leaders.

Many in the city have been concerned that those promises are now being violated by the central authorities and their agents in Hong Kong, and that the promise of universal suffrage is appearing more and more like a mirage. The Chinese Communist Party in reality has devised an electoral system that allows it control who becomes the chief executive, and it is this arrangement that many in Hong Kong are now chafing against.

These sentiments caused an outpouring to the streets beginning in late September, leading to a longterm occupation of key roads around government offices in Admiralty and the busy shopping district of Mong Kok.

The students said they had two primary demands at the meeting with government officials on Tuesday: the elimination of “functional constituencies” in the Legislative Council, Hong Kong’s legislature, and the government’s submission of a supplementary report to the National People’s Congress Standing Committee, China’s rubber-stamp legislature.

Functional constituencies are members to the Legislative Council chosen from within specific professions or interest group and are not subject to the popular vote. And students want the Hong Kong government to tell China’s NPC about the groundswell of democratic sentiment in Hong Kong.

Students say it was the failure of Hong Kong officials to accurately reflect the popular sentiment in Hong Kong that led to the National People’s Congress making what they consider the disastrous ruling of Aug. 31, which put a straitjacket on democracy for the 2017 election, by only allowing two or three politically-vetted candidates to be nominated.

Protesters on the other hand want the public to be able to directly nominate candidates for the chief executive election. This was entirely off the table, government representatives said. Multiple times.

The discussions, which were a fast and spirited two hours, were orderly and calm. No side violated the rules of debate that were established beforehand, said Leonard Cheng, the moderator, President of Lingnan University and a former advisor to chief executive Leung.

Given that the five representatives of the government are essentially functionaries when it comes to the broad constitutional questions, it’s unclear how much more they could have realistically done or said.

The students demand and wish that the government represent their interests to Beijing, and accurately reflect to central authorities the demands for democracy there, although Hong Kong is beholden to Beijing, and as far as the Party is concerned, is meant to serve its interests first.

“The people of Hong Kong would very much hope that government officials who enjoy power would come out with the courage and sincerity to face the public and resolve these political problems of your own making,” said Lester Shum, deputy secretary of the Federation of Students. “Like many people watching television, and those in occupy zones, we’re very angry. We’re enraged. We’ve never understood why the government is telling us to pocket the National People’s Congress proposal, and they don’t have the courage to resolve these political issues.”

Shum continued: “Why is it that so many people have been smashed over the head with batons? All they want is for the Hong Kong government to give us civil rights and grant us the democracy we’ve been fighting for for 30 years.”