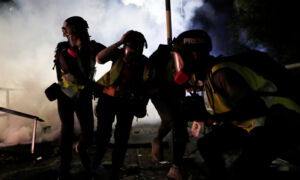 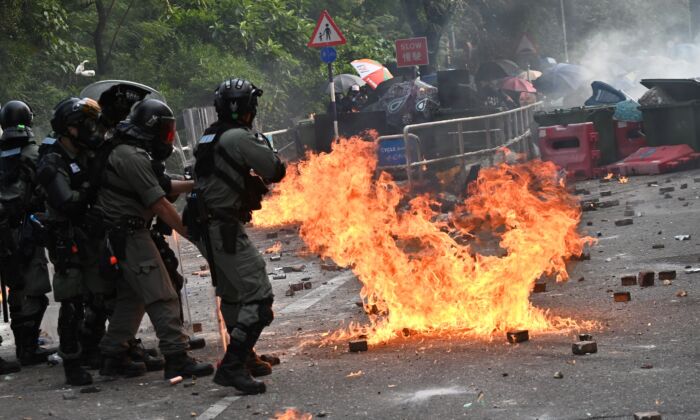 Police fire tear gas toward protesters at the Chinese University of Hong Kong, in Hong Kong on Nov. 12, 2019. Protesters struck the city's transport network for a second day running after police shot a young demonstrator and another man was set on fire. (PHILIP FONG/AFP via Getty Images)
HK Current Affairs

A Hong Kong court has rejected an emergency injunction filed by the student union of the Chinese University of Hong Kong (CUHK)—the site of an intense standoff between police and protesters on Nov. 12—that sought to prevent riot police from entering the campus without a search warrant and firing crowd control equipment without the school’s approval.

Riot police reported that they fired more than 1,500 crowd control bullets and 1,567 canisters of tear gas on Nov. 12, the majority of which was on CUHK campus grounds.

Police said they were responding to reports of CUHK students throwing objects onto a highway near the school during a city-wide strike fueled by widespread anger over the death of a 22-year-old protester and desperate calls for the Hong Kong government to answer protester demands. Students had also disrupted metro services near the campus.

When student protesters built up barricades to prevent police from entering the university premises, police began their onslaught.

When the school president sought to negotiate with police to calm tensions, police fired more tear gas. Officers did not retreat until late in the evening.

The following morning, the CUHK student union filed with the injunction with the High Court of Hong Kong. After an evening hearing on Nov. 13, the court ruled against the order, saying that police had the power to disperse any gathering that they reasonably believed could lead to a “breach of peace,” regardless of wider issues, according to local broadcaster RTHK.

The union had argued that according to Article 29 of Hong Kong’s Basic Law and Article 14 of the Bill of Rights, armed police cannot enter the private area of the campus without permission or a search warrant.

But Justice Wilson Chan Ka-shun, referencing section 17(2) of the Public Order Ordinance, said in his judgment that the students failed to establish a serious case against the police actions in light of the strike movement’s actions to “paralyse Hong Kong.”

For the first time since the mass protests against Beijing’s encroachment over city affairs began in June, police escalated their tactics and stormed college campuses throughout Hong Kong, including CUHK, on Nov. 11 to make arrests.

In response to the escalating tensions, the university announced on Nov. 13 that it was ending the current school term immediately, with all classes scheduled for the remaining two weeks to be cancelled. Students will return to school on Jan. 2, 2020, when the new term starts, the university said.

“Objectively, CUHK stopping the school term in advance is a way of forcing all students to leave the campus. Thus, the students who stay won’t be protected by the school,” U.S.-based China commentator Tang Jingyuan told The Epoch Times on Nov. 13.

Protesters shared on Twitter that they collected 2,356 tear gas cartridges after the police besieged the campus on Tuesday evening—far more than the official police count.

The Hong Kong Hospital Authority said that 51 people, aged between 10 months to 81, were sent to the hospital from protest sites throughout Hong Kong on Nov. 12.

According to Audrey Eu Yuet-mee, the Hong Kong barrister who represented the CUHK student union before the High Court on Nov. 13, 119 people were injured during the clashes at the school.

Many Hongkongers throughout town tried to deliver supplies to students at CUHK on Tuesday evening and Wednesday. Hong Kong singer and activist Denise Ho posted on Twitter that she was stuck in traffic for four hours on Tuesday night as roads leading to the university were filled with other Hongkongers seeking to provide aid.

Despite the Chinese regime’s strict censorship of the internet and control over content about the Hong Kong protests, university students in mainland China started an online campaign to support CUHK students on Nov. 13.

On Twitter, some mainland students shared photos of their student ID card, showing their school logo while covering their name and photo to protect their identity, along with messages of support for CUHK students.

They wrote notes in simplified Chinese characters: “be brave, CUHK,” “we support you, Hong Kong,” “freedom won’t die,” “The Chinese Communist Party will disintegrate,” and so on.

The information on their ID cards revealed the voices of support were coming from students in universities throughout China, including the University of Science and Technology of China in Anhui Province, Sichuan University in the eponymous southwestern province, Fudan University in Shanghai, Harbin Institute of Technology in northeastern China, and Shenzhen University, located in the eponymous city bordering Hong Kong. Mainland students studying at overseas institutions were also among those to show their support.

At the same time, Hong Kong police confirmed that they have assisted mainland Chinese students studying at CUHK in leaving the city.

Photos circulated online on Nov. 13 appearing to show a crowd at the Ma Liu Shui Ferry Pier near the school campus preparing to board a police vessel.

Police said on Nov. 13 that the marine vessel was to escort mainland students who wanted to leave campus, owing to concerns for their safety amid the ongoing protests.

Radio Free Asia quoted Pan, a mainland Chinese studying at CUHK, who said that Beijing’s representative office in Hong Kong, the Liaison Office, had arranged for the assistance to mainlanders.

“The Shenzhen [the mainland Chinese city that borders Hong Kong] side has set up relay stations, supplies, and free temporary accommodation for our students,” he said.

Around noon on Nov. 13, student protesters and reporters at CUHK also witnessed several helicopters painted with the logos of China’s military, the People’s Liberation Army, patrolling the air above CUHK.