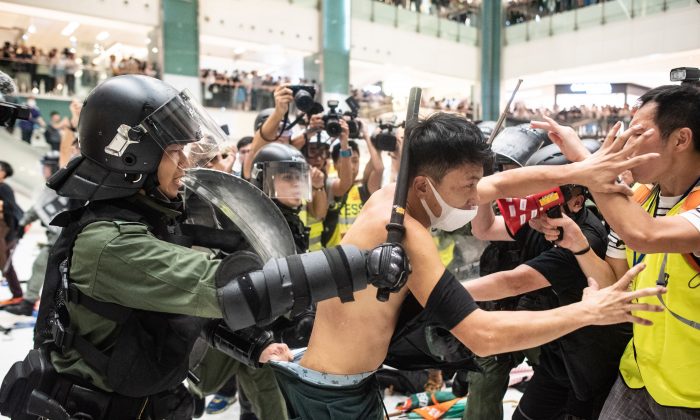 Police officers tear the shirt of a protester during a clash inside a shopping arcade after a rally against a controversial extradition bill in Sha Tin district of Hong Kong on July 14, 2019. (PHILIP FONG/AFP/Getty Images)
HK Current Affairs

Pro-democracy lawmakers and rights groups in Hong Kong accused the police of intentionally preventing protesters from dispersing during a pitched running battle on July 14, saying such tactics led to chaos and the violent clashes that ensued.

On July 14, a largely peaceful rally—that organizers estimated at 115,000 people—in Hong Kong’s northern town of Sha Tin, which sits near the border with mainland China, descended into violence inside a major shopping mall following an hours-long standoff.

Police officers wielded shields and batons and deployed pepper spray against a small group of protesters inside the mall, wrestling some to the ground and chasing others as the two sides engaged in a pitched battle. Protesters pelted officers with bottles, umbrellas, and other items as the force charged forward.

The bloody clash led to the arrest of 47 protesters and injuries to 13 police officers, according to a July 15 press release by the city government. The number of protesters injured remains unknown.

On July 15, pro-democracy lawmakers and human rights groups condemned the police for purposefully besieging protesters and hindering their retreat, which incited panic and escalated the chaos.

Civil Rights Observer, a human rights group in Hong Kong that sent witnesses to the nighttime protest, alleged the police set up blockades in major exit routes around the shopping plaza while the force was advancing toward the crowd of protesters in the mall.

The train station stretching through the mall, which many protesters used in an attempt to leave, also temporarily suspended service during the police’s clearing actions.

The two moves effectively contained the protesters and left them with no path to leave, the rights group said, calling the police’s tactic a “siege.”

“[Such a tactic] would induce a ‘kettling’ effect and cause severe confrontations between police and protesters, which could lead to consequences unintended by the clearing actions,” the group wrote in a July 15 statement.

Several pro-democracy lawmakers also condemned the police for chasing after protesters in the constrained space of a mall, comparing it to a gladiator style of battling.

Claudia Mo, a member of the Hong Kong legislative council (LegCo), said at a press conference on July 15 that the police’s actions effectively turned the indoor shopping space into a battlefield, for which she was “tremendously saddened.”

Mo also criticized the police for storming the mall en masse without consent from the mall’s manager.

Civic Party lawmaker Alvin Yeung, who was inside the shopping mall during the clash, described the police as “beating up and firing pepper spray at anyone they saw,” and criticized them for inciting fear and chaos.

“They had terrified the tourists and ordinary Hongkongers [inside the shopping mall],” Yeung said at the July 15 press conference, demanding that the police face up to the public for what they did.

Meanwhile, city leader Carrie Lam and her administration also spoke out swiftly after the July 14 clash, calling the protesters “rioters” and vowing to pursue them with consequences.

“[We] strongly condemned the protesters who violently assaulted the police force,” Lam said after visiting three of the police officers injured during that clash. She went on to thank the police for showing their “professionalism and restraint.”

Amid a protester’s chanting in the background, which accused her of “betraying Hong Kong,” Lam admitted that her current work has “encountered great difficulties” but reiterated her intention to finish her remaining three years as the city’s chief executive.

Lam again pledged to the public that all government work on the bill had been halted, and said she hoped “the public could understand.”

Civil Rights Human Front, the organizer behind recent protests joined by millions of Hongkongers, issued a statement on July 15 in response to the clash: “If the government truly wants to protect police officers on the frontline and prevent more civilians from being injured in protests, it should more actively respond to the demands of protesters.”