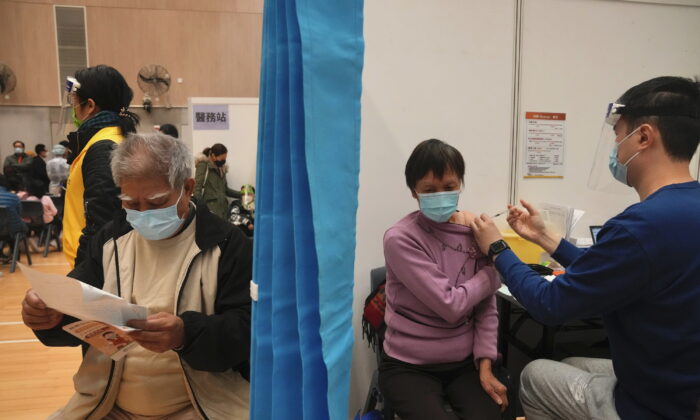 It has been more than a year since the Hong Kong government began its COVID-19 vaccination program. The latest government data shows that as of May 15, the total number of vaccine doses administered was 16.45 million, and the Department of Health received 7,484 reports of unusual vaccination events, of which, 103 were deaths within 14 days after vaccination.

The Food and Health Bureau recently approved a HK$2 million (about $254,790) payout for a death case, the first compensation for death after COVID vaccination in Hong Kong.

The government set up a HK$1 billion (about $127.5 million) Indemnity Fund to provide compensation for individuals who suffer from adverse events after COVID-19 vaccination.

According to the “Report on the Safety Monitoring of COVID-19 Vaccines in Hong Kong,” released by the government at the end of last year, a 66-year-old woman died 16 days after receiving her first dose of BioNTech last July. The autopsy results indicated that myocarditis was the cause of death.

The co-convener of the Expert Committee, Hung Fan-ngai, explained in an interview with a commercial TV program, that the woman had no long-term illness and the autopsy report indicated a type of virus called parvovirus B19 in her body, which can cause acute myocarditis. Since the parvovirus was present for a period of time, the exact cause of the myocarditis cannot be fully explained.

Hung pointed out that a vaccine can cause myocarditis, but mostly in young men. He admitted that the COVID-19 vaccine is not like other vaccines, which usually need 10 years of research and development and 3 phases of clinical testing before medical application.

Starting on June 1 last year, the Hong Kong government announced no death cases will be reported if the Expert Committee determines that a potential causal connection between the death and vaccination is not found.

Hence, the public won’t know the actual number of post-vaccination deaths. The move also raised questions from the community about whether the government deliberately concealed the serious adverse effects of vaccination.

Cheng Chung-tai, a Hong Kong citizen, pointed out at the question and answer session in Legislative Council, that relevant practices will make people question whether the government is deliberately covering up an unsightly thing.

Then Chief Executive Carrie Lam responded that “the method of presentation is very important” to resolve citizens’ hesitancy about vaccination. She believes that every time it is announced that someone died after an injection, it may creates an “illusion” and affect people’s confidence in vaccination.

Yuen Hoi-man, vice spokesperson of Health Policy from the Democratic Party, said in an interview with The Epoch Times, that Hong Kong’s low vaccination rate is due to Hong Kong people’s distrust of the government. Now that the government has decided not to announce certain relevant statistics, people will become more worried and distrustful.

Adults Under 60 Do Not Need a Vaccine Pass: Scholars

In order to increase the vaccination rate, the government  implemented a Vaccine Passp on February 24, 2022, which enter its third phase at the end of this month.

The policy stipulates that except for those who have recovered from the COVID-19 and exempted persons, all people aged 12 and over must receive at least 2 vaccinations before they can enter designated venues, including restaurants, supermarkets, shopping malls, and fitness centers.

Professor Gowling Benjamin John, Chair of Epidemiology from LKS Faculty of Medicine, the University of Hong Kong, and Chan Tak-kwong, Honorary Assistant Professor of the Department of Pharmacology and Pharmacy, jointly wrote in a newspaper recently that the policy severely restricts personal freedom and is essentially “mandatory vaccination.”

They disagree with the government’s continued use of coercive policies to vaccinate young adults, and suggest cancellation of the vaccine pass for adults under 60.

Chan said in an interview with Radio Television Hong Kong, that the fifth wave of the epidemic in Hong Kong will end, mainly after a large number of infections have occurred, not because of vaccines.

He expects that the virus will continue to mutate in the future, the current vaccine will not be able to stop the epidemic, and its efficacy will only become lower and lower. Even if young adults are not vaccinated, the rate of severe disease and death is still extremely low.

He believes that the government has no reasonable moral or legal basis to continue using the vaccine pass system.