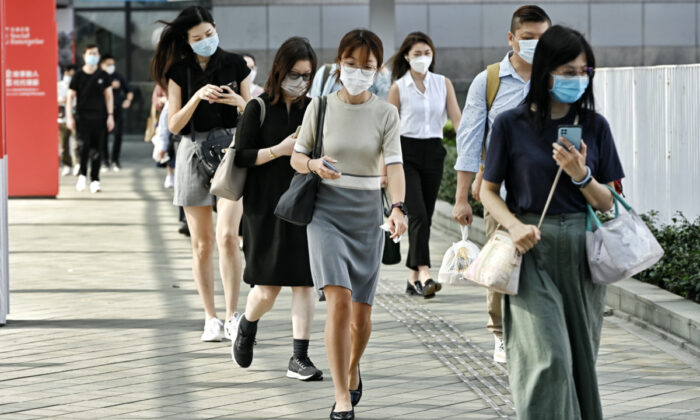 Hong Kong’s civil service resignations have reached a scale not seen since the city’s handover to China in 1997.

The city’s Civil Service Bureau (CSB) recently disclosed that 10,487 civil servants left their jobs in the year 2021-2022, of which 3,743 resigned—double last year’s number, according to the Hong Kong Free Press (HKFP). Other reasons for departure included retirement, not renewing their contract, dismissal, and death.

Among those who resigned, 32 were administrative officers, which the report defines as “a prestigious government role where some go on to fill leading positions in bureaux or departments.”

Since Beijing imposed the sweeping National Security Law, Hong Kong has faced an exodus of educated workers on a scale not seen since the early 1990s, impacting the city’s many functions, especially its civil services.

The number of applicants for top government roles has also fallen to record lows, the report added.

Pledge Allegiance or Be Dismissed

The Hong Kong government now requires civil servants to take an oath or sign a declaration of allegiance to the Hong Kong authority under the Chinese Communist Party (CCP). This requirement was introduced last year and was extended to cover non-civil service employees.

The city’s Secretary for Constitutional and Mainland Affairs, Tsang Kwok-wai, revealed in a recent Legislative Council meeting that 129 civil servants and 535 non-civil servant government employees, who ignored or refused to sign and return the declaration, had left their government posts last year.

Leung Chau-ting, chief executive of the Federation of Civil Service Union, told local newspaper Ming Pao that the city’s civil servants now face uncertainty amid increased political pressures such as taking oaths. He worries that the vacancies might not be filled with the falling number of applicants for civil service jobs in recent years.

The report said that Hong Kong is facing challenges maintaining audit staff at appropriate levels. In response to the situation, FRC recommends that firms decline engagements when they do not have the time and resources to conduct a high-quality audit.

On top of the emigration wave, the city is also experiencing a significantly higher employee turnover rate.

The city’s accounting and legal staff turnover rate reached 11 percent in 2021, a nine percent jump from the previous year, said Kelvin Wong, the chairman of FRC, in a local press briefing on June 23.

The FRC is an independent body with the statutory duty to regulate auditors of listed entities in Hong Kong. Its 2021 annual inspection report covers the financial year of Apil. 1, 2021, to March 31, 2022.